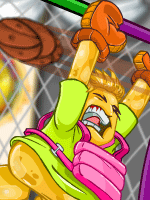 The Practice Team in the Altador Cup hail from Jelly World, and are available to all teams when they are not playing live matches. Currently, the team is made up of five jelly Chias, but before the 3rd Altador Cup, they were made up of five different players. There was a Blumaroo, a Usul, a Kougra, a Kau, and a Techo. The Kougra and the Kau looked like this: 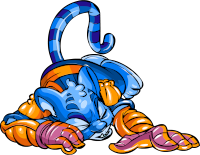 Thanks goes to ProblematicPeriwinklePlum for tracking down the Jelly Blumaroo shot above.

From the sixth Cup onwards, the members of the team were Vinarok, Zeenana, Lemoran, Tagobo, and Wartroot (the goalie). It's unclear if these were the same Chias from previous years, however.

Though the Practice Team has never taken part in the tournament, they have been present from 2006 to 2022. In the first two Altador Cups, the team's icon was different. It looked like this: