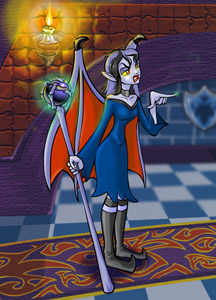 Also known as the Sleeper and the Betrayer, the Darkest Faerie was one of the twelve founders of Altador. King Altador had met her after she saved his life from a monster. Impressed by the dark Faerie's compassion, he invited her on his quest to found a great city. The Darkest Faerie accepted and spent many years serving Altador's council but ultimately her betrayal wrecked all former perceptions of nobility. She was so powerful that only Queen Fyora was able to banish her with the help of Jerdana (in the year 993 BN).

After 1000 years, she returned, and took over Meridell. She then proceeded to attack Faerieland, and captured Fyora. It was only with the help of Tor and Roberta that she was imprisoned in stone once more. Fyora has had the stone Darkest Faerie moved to her personal gardens to keep an eye on it.

However, at the conclusion of the Faeries' Ruin plot, it was discovered that her statue had disappeared when Faerieland crashed. It was eventually found by Reizo in the Forgotten Graveyard, where he accidentally released her.

She used the remains of the broken Jerdana's Orb to create a ruby ring, and used that to transform Neopets into creatures resembling Wraiths. She planned to use them to challenge Fyora, but discovered the orb's remains were draining her life force. She then decided to kill everyone with magical, poison gas. This plan, too, was stopped, and the Darkest Faerie fled.

Fyora stole one thousand years from me, and that was about what it took for me to plan my revenge.

Be the focus of my dark wrath...

You want some visions? Close your own eyes *mockingly*

Bend the knee to my rule!

*recites* 'Only creatures of pure Evil may...' *laughs maniacally*!

If you think this is the last of me, you have another thing coming.

Enough already? I was just beginning to have fun.

Her statue in the Darkest Faerie game has the inscription, "Our friend from the shadows, her powers she brought to our cause. But her dark desires were too strong, and she schemed to rule the empire alone. Through strength of friends, her evil was banished, and the twelve founders became eleven."

During the Wraith Resurgence plot, she was being drained of life by the ruby ring she wears (and seemingly cannot just take off). It is unclear if she is still having her life force steadily drained.