The Altador Plot was released on the 17th of March, 2006 (Year 8). The final part was released on the 3rd of June, however unlike any other plot before or since, the entire thing is still available for completion. It served as a loose sequel to the events of the Darkest Faerie real-life video game, and introduced the land of Altador.

The plot began with a portal to Altador opening in Queen Fyora's chambers. Exploring Altador, adventurers soon came across the Altadorian Archives, and Finneus, the Archivist, within. They helped him out and gained access to a tome known as the Book of Ages—a curious book that was mostly blank. (And of course, the namesake for this department!)

Soon after, the Astronomy Club set up shop in the Archives, and using a telescope, adventurers were able to map the stars from the top of the Hall of Heroes. Exploring the city further led users to the Restive Tomb, where strange lines appeared to indicate the layout of a constellation—the Sleeper. Upon discovering this constellation, Finneus got an odd feeling that it was somehow important, and discovered that more information regarding the Darkest Faerie had appeared in the Book of Ages. He urged adventurers on to discover more constellations, in the hope of learning more.

Another clue was soon found in the cloud formations above Altador. This led to the discovery of the Dreamer constellation, and a chapter in the Book of Ages about Psellia. Not long after, another clue was found in the courtyard of the Hall of Heroes, revealing the First to Rise constellation, and Siyana, whom it represented. Meanwhile, Finneus discovered that every single history book was missing from the Archives.

On Follies Farm, just outside of the city walls, a clue to the Farmer constellation, and the guardian named Florin was revealed. Soon after, the Dance Club opened up in the Archives, run by an angry Quiggle who, through different costumes, appeared to run every other club but the Astronomy Club. Hidden in the disco ball in the Dance Club was the clue to the Dancer constellation, and Sasha, whom it represented. Finneus meanwhile discovered that it wasn't only the Archives that were affected - not a single history book could be found in all of Altador, and no one could remember any history either.

At the Altador docks, the arrangement of the waves provided a clue to the Wave constellation, and the guardian named Marak. Adventurers soon discovered the top secret Punch Club at the Altador Colosseum. On a goblet at the Punch Club meeting, a clue revealed the Gladiator constellation, and its council member, Torakor. Meanwhile, the members of the Astronomy Club became increasingly annoyed at their grumpy leader, and Finneus discovered that whatever magic had stolen the history of Altador belonged to one of the remaining 11 Heroes.

In the Altador shops, a clue leading to the Collector constellation, and Gordos was found. Soon after, the Lenny Conundrum Wizard appeared at the Archives, hoping to surprise his uncle, Finneus, for his birthday. He hoped to decorate the Archivist's favourite Meepit plushie. Upon recovering it for him however, the Conundrum Wizard ripped it in half, revealing a dagger within—itself a clue to the Thief constellation, and the hero, Kelland.

Soon after, a hurt Vaeolus appeared in Altador, and Finneus agreed to help care for it. Soon after the Petpet recovered, a Petpet Protection League representative arrived to present adventurers with a certificate which held the clue to the Gatherer constellation, and the hero named Fauna. Meanwhile, Finneus discovered a book of spells in the Archives that seemed to detail similar magic to that effecting the city—a book donated by Jerdana. Adventuring outside the city led visitors to a hollow section of the wall guarded by a ghost Minitheus, which refused to let people past. Immediately after, the Water Distribution Plant suffered a malfunction, and the race was on to fix it before the city flooded completely.

As Altador was successfully protected, the ghost Minitheus decided to let people pass, providing access to a mysterious necklace—a clue to the Protector constellation, and its representative, Jerdana. Soon after, the members of the Astronomy club launched a coup against their leader, revealing him to actually be Old Man Withers, the Quiggle who ran the other clubs.

The final clue was revealed in the Hall of Heroes itself, leading to the discovery of the Hunter constellation, and its hero, King Altador.

With all of the constellations found, Finneus suggested locating a spell book in the Archives, which turned the fire on the statue of the Darkest Faerie into real fire. Quick thinking adventurers placed the necklace over the statue, and it promptly exploded.

It appeared that the spell had finally been broken, and the memories of the Altadorians returned. It turned out that Jerdana had cast the memory removing spell to protect the people of Altador. The Darkest Faerie had planned to change their memories, to remember her as the rightful ruler of the city. Jerdana succeeded in pre-empting the spell, but of course in doing so removed her knowledge of ever casting the spell in the first place. With Altador finally restored, the city looked forward to a bright new future.

Users participated in the plot by gathering various clues and locating constellations in a Flash-based puzzle. Steps were released gradually over time, but remain open to new users.

Unlike in previous and subsequent plots, there were no plot points available, and everyone who completes the plot gets exactly the same reward upon completing the plot. Users received 5,000 Neopoints and the following items:

Perhaps the largest prize awarded, however, is access to the Altador Council Chamber as a new daily.

Everyone who completes the plot is also granted the following trophy:

An avatar is awarded to everyone who completes the plot:

Visit King Altador after completing the Altador Mini-plot and after receiving your first prizes. (You receive this by going back approximately 6-12 hours later.)

In addition, the Altadorian Constellations site theme is awarded. 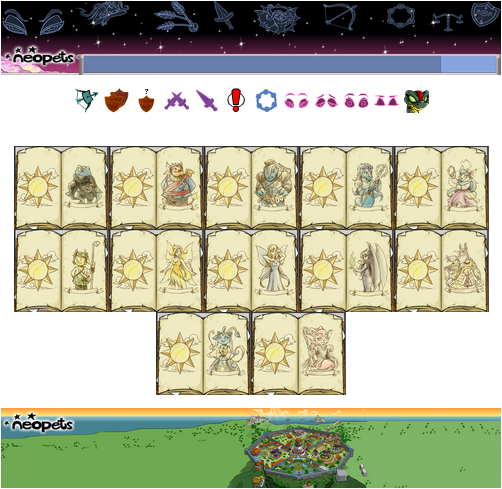