Atlas of the Ancients

The Atlas of the Ancients was a plot that began on the 16th of October, 2009 (Year 11) and lasted until the 25th of November. It served as the introduction to the land of Moltara, and was the first plot to include a Neocash Challenge element. 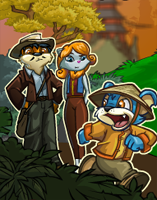 The tale began in Shenkuu, with a pair of children discussion rumours of fire-breathing monsters lurking in the hills after dark. The Wise Gnorbu from the Lunar Temple overheard their conversation and, combined with a local flower, he seemed to remember something. He soon returned to the Lunar Temple, and instructed his greatest pupil, Clara Chatham, to find a book that might prove useful in jogging his memory. The book revealed details about coming natural disasters, and a solution to them. The Wise Gnorbu soon sent for the famous adventurer, Roxton A. Colchester III, dispatching him to locate several artefacts listed in the book. Together with Clara and Roxton's assistant, Jordie, Roxton set off to Altador in order to start solving the mystery.

They rented a flying boat from a local Shenkuu merchant, but soon ran into storms and were forced to hide in a cave until they passed. There, they discovered ancient cave drawings depicting the fire breathing creatures. The following morning the group arrived in Altador, and saved a fisherman from drowning in abnormally heavy waves. The group followed the clues in the book to the Hall of Heroes, where Roxton located an old pocket watch hidden behind the statues of the Council.

The trio then made their way to Faerieland, but while exploring the city Jordie was struck by lightning. Roxton immediately rushed him to the Healing Springs, and there Roxton followed another clue to locate one of the pumps for the spring. With a little help from Clara, he was able to distract the Healing Springs Faerie for long enough to steal the pump.

The three escaped Faerieland and set course for Terror Mountain. As they rested, Clara discovered that the pump they had stolen was actually a very complex clockwork device of unknown origin. Before they could figure out more however, the boat was attacked by a fleet of pirate Cloud Raiders, and Roxton had to use all his skills to successfully pilot them to Terror Mountain.

On Terror Mountain, they discovered that the normally permanent ice was beginning to melt, and normally rare Moltenores were appearing. They trekked through the Ice Caves, and located a brass horn buried in the ice. They recovered the horn, and narrowly avoided the subsequent avalanche, before heading back to their vessel. There, Roxton was able to cross reference all of the places they had visited to form an X, pointing towards their next destination. They made their way towards the deserted island chain near Altador, where they found a volcano - as described in the book.

*insert gag about women and map reading* Finished? Good, on we go...

Exploring the island, they found a large door in the mountainside, and the key to it located in the bushes nearby. The trio entered the mountain, to find that a large mining shaft disappeared deep into the planet. They parachuted down the shaft, and when they reached the bottom they discovered the long lost city of Moltara. They soon came across a local, Cog, who showed them to the Mayor of the city.

The Mayor informed the travelling group that Moltara was founded centuries ago by a group of scientists and mystics that travelled to the planet's core in order to put an end to horrible natural disasters occurring on the surface. Together they created a device to stabilise the planet's core and end the disasters, and then elected to stay nearby to keep watch over it. Over time, the machine had worn down, and the disasters had started to return. The materials the book had instructed them to gather turned out to collectively be a device to restore the core to working order. However, when Cog attempted to use it, the core erupted. The Mayor instructed Roxton and Cog to travel further into the magma caves, where a group of outcast Moltarans lived that might be able to help control the lava.

In the Moltaran Caves, they located Igneot and his followers, mystics that had become so attuned with magma that their bodies had changed appearance. Igneot agreed to help, and together with the inhabitants of Moltara City, they were able to stabilise the core long enough for Cog to use the repairing device again. With the core repaired, the Moltarans decided it was time to open their city to the rest of Neopia. Roxton, Clara, and Jordie returned to the surface to tell the Wise Gnorbu of their adventures.

Users participated in the plot by completing several simple point and click steps, and achieving certain scores in specially made flash games. Unlike previous plots, no specific plot points were given. However, those who completed steps on the same Neopets day as it was released received higher rewards.

There was also the option to take part in the NC Challenge; by completing several simple additional plot steps, they would be rewarded with bonus NC items.

Trophies were also awarded with the prizes, based on the same criteria:

The following avatar was released to all participants:

Atlas of the Ancients / Guide

Awarded to users who participated in the Atlas of the Ancients plot.

In addition, users who participated also unlocked the Atlas of the Ancients site theme. 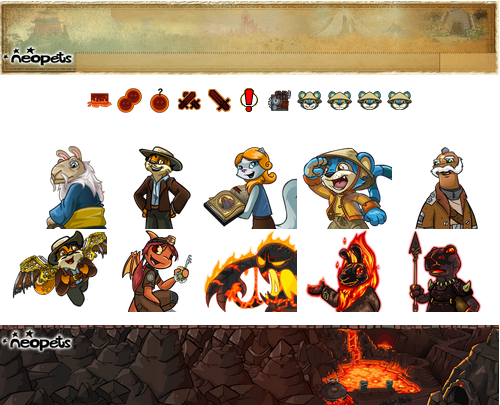