Champions of Meridell was the first and only plot released in 2002 (Year 4). It began on the 23rd of July, and lasted until April 28th, 2003 (yes, almost an entire year!). It was the first example of a two sided war on Neopets, was the first plot to have avatars associated with it, and introduced the lands of Meridell and the Darigan Citadel. 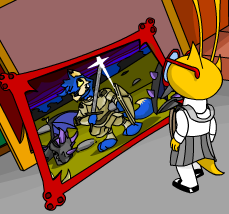 The plot began with four friends playing a NeoQuest board game while on break from school. Lisha, Kayla, Morris and Boris were approached by the local bullies, who ruined their game. Lisha fought back with surprising skill, and the bullies ran away. The following day, the school took a trip to the Neopian History Museum. There, a caretaker showed Lisha and Morris to the backroom, where they found a painting of a Lupe named Sir Borodere. The Lupe in the painting brought back memories for Lisha, who lost her brother, also a Lupe, during a game of hide and seek years ago. Knowing that the painting was hundreds of years old, Lisha concluded that something must have happened to her brother, Jeran, that day.

The next day, the four friends adventured to the place where Jeran and Lisha had played hide and seek. They located the ruins of an old castle, and Lisha frantically searched for the place where she lost her brother, all the while losing her temper with her friends who were treating it like a game. Eventually, she broke and threatened Morris with her wand, but something charged it with different magic, and the four friends were teleported away to a real castle—in the lost destroyed land of Meridell.

As King Skarl, ruler of Meridell, called Sir Jeran for advice, the four friends were captured by guards. Lisha tried to explain the situation, but was met with disbelief. As they were led away to the dungeons, strange creatures burst through the windows and attacked the guards. The friends were quick to react, fighting back the monsters and winning the trust of the guards. Presented before King Skarl, the Skeith also doubted their story. However, Sir Jeran convinced him to pardon them, after sharing that he too had a similar experience when he arrived in Meridell.

With the situation resolved, King Skarl began to explain the possible motives for the monsters attacking the castle. Long ago, Meridell was facing a famine, and so Skarl sent out his knights to find a cure. They came across an old seer, who told them the location of a magical orb. The knights recovered it and returned it to Meridell, and instantly the country began to blossom again. Skarl assumed that the monsters had arrived to steal the orb.

This however, was a lie on Skarl's part. The orb had originally belonged to Lord Darigan, and was stolen by the knights. The creatures attacking the castle were the people of the Darigan Citadel, a floating citadel that had arrived to reclaim its stolen property. The Darigan army was poised to attack, and was ready to take no prisoners.

A great battle raged across Meridell, with the Darigan forces being the eventual victors. For an unknown reason, Hubrid Nox worked his magic to make the Darigan forces stronger. Lord Darigan recovered the orb, and retreated back to the Citadel. Yet, something was wrong, the orb did not begin to heal the people. Lord Darigan, bewitched by a strange magic (later revealed to be that of the Three), chose to use the orb for himself, and focused all of its magical energy on destroying Meridell.

Seeing the madness that had overcome their leader, the Darigan forces began to defect to the Meridell cause. Both armies joined forces to challenge Lord Darigan, now transformed into an evil fiery demon. Their combined might proved to be enough, overpowering Lord Darigan and causing him to disappear in a flash of light. The magical orb, before anyone could claim it, split in half, removing its power.

With the cause of the conflict gone, Meridell and the Darigan Citadel formed an uneasy truce. One which would eventually be shattered in the plot's sequel, Battle for Meridell.

This plot allowed users to score points by fighting Battledome Challengers. Unlike previous war plots, users could choose a side in the war (either Meridell or Darigan). This changed which Battledome opponents were available to be fought.

For the Darigan forces, the opponents were:

For the Meridell forces, the opponents were:

The following prizes were sent out to users via neomail, based on points scored:

After the battle, trophies were awarded based on the number of points users had gained during the battle. Each trophy also had several different levels.

Those who fought for Meridell received one of the following trophies:

Those who fought for Darigan Citadel received one of the following trophies:

In addition, anyone who participated could view their lookup to receive an avatar based on their chosen side. These avatars, however, were released well after the plot concluded.

Awarded to users who fought for Darigan in the Champions of Meridell war.

Awarded to users who fought for Meridell in the Champions of Meridell war.