The Curse of Maraqua was a plot released on the 15th of March 2005 (Year 7). It lasted until the 10th of June, and is to date the last example of a plot with a significant war element on Neopets. It served as the reintroduction of the land of Maraqua, and introduced a controversial rank system.

The story began with a recap of the events following a Curse on Maraqua, the plot which saw the destruction of the city. King Kelpbeard gathered as many survivors as he could, including the twin sisters Isca and Caylis, and brought them all to a makeshift shelter. Over time, this grew to become the city of New Maraqua. The two sisters began to have prophetic dreams, and while Isca's dreams always proved useful, Caylis's predicted horrible disasters. Seeing her as a curse, the people of New Maraqua cast her out.

Meanwhile, the pirate crew of the Black Pawkeet raided a wedding party on the surface, and word of this soon reached Captain Scarblade, self proclaimed ruler of the five seas. Scarblade attacked the Black Pawkeet, and Captain Garin set about defending the ship with the help of his first mate, Jacques. As Garin gave the order to abandon ship, he was hit over the head by Benny the Blade, and fell into the ocean. Meanwhile, Jacques was surrounded and captured by the evil Water Faeries known as the Drenched. 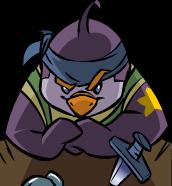 Under the surface, Garin was rescued by Isca, who gave him a magic necklace that allowed him to breathe underwater. She showed him in secret to the city of New Maraqua, where his wound could heal in peace. While Isca was called to the King's chambers, Garin took his chance to explore the city. There, he stole a blade of Maractite, with the power to cut through water as if it was air. When his wound healed, Isca escorted Garin back out of the city. The pirate returned to the surface, and made his way to Scurvy Island in the hopes of finding his crew. There he found Talak working in an inn, who informed him that the crew had been captured by Scarblade. As Garin told his story, Benny the Blade watched from the shadows.

Garin searched in vain for his friend, Jacques, until Isca returned. The Maraquan claimed to have dreamed that he was being held captive by the Drenched, and offered to help find him. The two stormed the cave, and with the help of a magical potion designed to make Jacques breathe underwater, they managed to escape. They returned to the surface, where Isca explained her fears of a coming invasion. Garin pledged to help, before returning Jacques to the island. It wasn't long before the duo was kidnapped, and taken to Scarblade's secret base. There Garin met the remains of his captured crew. With the help of the Maractite blade, Garin broke his crew out, and reclaimed the Black Pawkeet. The crew rushed back to New Maraqua, hoping to warn the locals of Scarblade's invasion plans. Garin succeeded in locating Caylis, who led the pirate back into the city. Unfortunately, he was captured almost immediately. The angered King Kelpbeard cast Isca out of the city to live with her sister, while imprisoning Garin in preparation of war.

Scarblade's ship arrived at New Maraqua, and used magic to sail beneath the waves. King Kelpbeard ordered the attack, and the war began. Garin managed to escape, and together with Jacques, the crew of the Black Pawkeet, Caylis, Isca, and Isca's pet monster, Goregas, formulated a plan to help the flagging Maraquan forces. It wasn't long before the pirates were caught between two sides of Maraquan forces, and King Kelpbeard himself joined the battle. The King met Scarblade in battle, with Kelpbeard getting the upper hand. Rather than die, Scarblade ordered a full retreat - Maraqua had won the war. 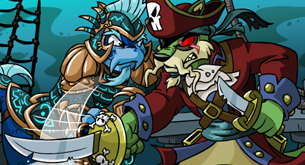 In the aftermath of the battle, the banishment of Isca and Caylis was removed, and Garin's crew was welcomed into the city. Though Garin was offered the chance to stay in the city, he decided instead to return to the Black Pawkeet, and his life as a pirate.

The Curse of Maraqua was a two sided plot. Users could choose to either join the Maraquan forces, or the crew of Captain Scarblade. Within each side, users could also choose to become a supporter, or a warrior. Warriors earned points in the Battledome, while supporters earned points from playing Maraquan games, or retrieving items for quests. Points could also be gained from turning in tokens from random events:

Another addition to the plot was the concept of Ranks. Users were split into three ranks, based on pet strength (for Warriors), and Neopoints (for Supporters). For Warriors, users would only gain points from defeating their rank's opponent in the Battledome, though they would challenge opponents from other Ranks.

King Kelpbeard was released as the final boss for all Ranks.

After the plot, users were able to redeem points for prizes in a prize shop, the first of its kind. The contents of the prize shop varied depending on the side/support method chosen.

Again, different trophies were given out depending on the side and support method chosen, which also reflected rank on user lookups. For the Maraquan Supporters, the trophies were:

The Maraquan Warriors were awarded the following trophies:

For Pirate Supporters, the trophies were:

For Pirate Warriors, the trophies were:

After the plot, four avatars were released as additional rewards:

Awarded to users who supported Maraqua during the Curse of Maraqua plot.

Awarded to users who fought for Maraqua during the Curse of Maraqua plot.

Awarded to users who supported the pirates during the Curse of Maraqua plot.

Awarded to users who fought for the pirates during the Curse of Maraqua plot.

There was also a site theme available, the Curse of Maraqua site theme. It was available from the prize shop for 1 point, unlike most site themes which are typically awarded for free. 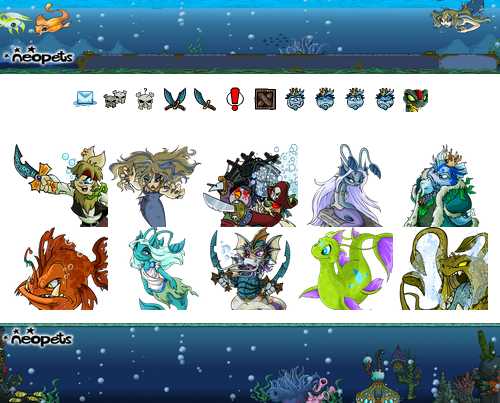 This page was written by Herdy and last updated on October 9, 2020.