The Cyodrake's Gaze was released on the 3rd of August, 2006 (Year 8). It lasted until the 8th of September, and is to date the last example of a logic puzzle plot on Neopets. It served as the introduction to the land of Shenkuu.

The story began with a mysterious ship, known as the Cyodrake's Gaze, appearing on Krawk Island. The ship was on its way to Mystery Island, but lost one of their crew, Hoban, on the way. Captain Tuan explained the events leading up to Hoban's disappearance. During dinner, Captain Tuan ordered Orrin to catalogue the ship's inventory, locking him in the hold. When the Captain returned to the rest of the crew, Hoban made a threatening remark about sailing the crew into a storm. It wasn't long before one appeared, and the crew fought their best to survive the night. The following morning, Orrin was unlocked from the hold, and he revealed that he heard someone fall into the water during the storm. Sure enough, Hoban could not be found on the ship.

Once the ship was repaired, it set out in search of Hoban, reaching Mystery Island without finding him. There, Kentari told the story from his perspective, revealing that after dinner he saw the chef, Bonju, sneaking out of the weapons room.

The ship left port again, this time turning up in Faerieland. The Cyodrake's Gaze was a ship that apparently had the capacity to fly. In Faerieland, Bonju explained his side of the story. Bonju indicated that Linae and Anshu were conspiring together after dinner, and that his trip to the weapons room had been to find a replacement for his missing kitchen knife.

After leaving Faerieland, the ship made its way to the Lost Desert, where Linae offered up her tale. She claimed that she had been discussing the bad quality of Bonju's food with Anshu. After dinner, she tried to play a game of Kou-Jong, but she found her Lost Desert Sunset piece to be missing. She found it under a crate on the deck, where she overheard Anshu and Hoban arguing not long before the storm began.

Finally, the ship returned to Mystery Island. There, the first mate, Shumi, unlocked Hoban's map room in the hopes that clues to his location could be found. Meanwhile, Anshu told his version of the tale. He claimed that actually he had been talking to Linae about a medical issue, not Bonju's cooking. On deck, he claimed the argument arose because Anshu wished to stop off on Krawk Island for medical supplies, but Hoban refused to.

With suspicions running rife amongst the crew that Hoban did not fall, but was pushed, Captain Tuan asked visitors to the ship to gather together the clues from the various stories and figure out who was responsible, and where Hoban was.

Finally, Hoban was located, and he gave his story. He claimed that during the storm, Bonju made a remark about Hoban not finishing his meal, to which Hoban replied that Bonju's food was not very good anyway. This sent Bonju into a rage, and the chef pushed Hoban over the side with a load of cargo crates. Hoban was able to survive floating in the crates, eating the food within, until the Cyodrake's Gaze returned for him.

With Hoban returned, Captain Tuan decided on a relatively small punishment for Bonju, locking him in the hold until they returned to Shenkuu.

Once all members of the crew (bar Orrin, Hoban, and Shumi) told their stories, users were able to guess the location of Hoban and his would-be murderer. The correct answers were:

Provided users guessed at least 2 of the questions correctly, a trophy was awarded:

All users who guessed at least 2 answers correctly also received the following avatar:

Awarded for guessing two or more correct answers on the "Who Pushed Hoban" questionnaire and then visiting this page.

In addition, they could claim the Cyodrake's Gaze site theme. 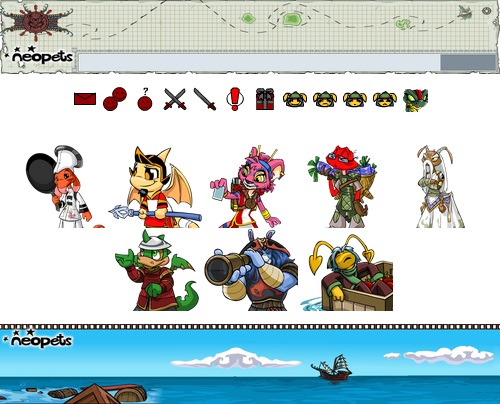 This page was written by Herdy and last updated on August 21, 2020.