The Daily Dare is an recurring event (normally annual, but it has skipped a year in the past) based around gaming on Roo Island. AAA normally sets challenges of beating scores in certain Neopian Games, as does his sister Abigail. Their cousin Lulu also sometimes gets involved. An additional cast of characters appear in various years - although normally the Daily Dare event lacks story, much like the Games Master's Challenge that AAA also runs, some years have come along with more substance.

This year began with AAA and Abigail playing games as usual when the pair were kidnapped from their homes and dragged through a forest to a mysterious castle. There, they were thrown in a dungeon outfitted with gaming equipment, and forced to play games for days on end—the only hope of release, they feared, would be if people on the outside managed to defeat AAA's high scores. All the while they were guarded by a Wocky named Scram, who seemed to be so insane that he would play games against himself.

Eventually, the Neopian public played enough to secure the release of the pair - but not without a twist. Their captor revealed himself at last—King Roothless. He believed himself to be the best gamer in all of Neopia, and captured AAA in order to have him challenge Neopians and discover those who were the best at playing games—to those, he offered one final challenge to prove who was better, him or them. He threw magical dust over AAA, Abigail, and Scram, teleporting them inside a game that they would need to escape in order to be released. Thankfully, the Neopian public proved better, and the duo were freed and returned home.

To celebrate the year's Daily Dare, King Roo remodeled the Games Room on Roo Island to work even better than before. Unfortunately, some parts appeared to have been installed upside down, and it made a strange whirring noise. He decided it was for the best to close it down while it was fixed, but AAA disagreed - not wanting to let his Daily Dare be ruined, he reactivated the machine. Unfortunately, this resulted in strange bugs appearing in the Games Room, slowly growing in number until they began to cover Roo Island, peaking at 6,714,556. Abigail asked Lulu to investigate, King Roo having gone missing.

After finding King Roo's diary, Lulu followed a lead to Neopia Central and Dr. Clodbottle. After discovering that Clodbottle had no idea what species of Petpetpets the bugs on Roo Island were, King Roo seemed to have disappeared. Lulu stopped by the bookstore, discovering that King Roo had picked up a repair manual. She then got caught in an impromptu pillow fight, and noticed a clue that suggested the King may have visited the Alien Aishas. She sneaked onboard their mothership, discovering that they had briefly interrogated him before releasing him back at the Neolodge. There, he had followed a lead north, hoping that Donny would be able to repair the Games Room.

Lulu followed the trail north, finding Valin ransacking Donny's shop. Valin had pretended to be Donny's assistant when King Roo visited, giving him a map to find a mechanic. After following Valin back to the Thieves Guild hideout, she learned that King Roo was spotted heading to Shenkuu, where he was taking part in a Godori tournament. Lulu got there too late, but learned he had taken a ship west.

Lulu pursued King Roo down to Moltara, where she found him with Tangor. Tangor had designed a device to reduce the noise of the new games room, hoping that it would no longer attract the strange bugs to the island. With it installed, Lulu set about rounding up the remaining bugs, and AAA completed his Daily Dare.

This year, AAA decided to attend summer camp at Camp Wannamakeagame with Lulu. Still wanting to hold a Daily Dare tournament, Abigail was joined by AAA's more popular classmate, Chadley. Abigail, having secretly admired Chadley, was more than happy about this arrangement. However, as time went on, Abigail realised just how self-absorbed Chadley really was, and came to wish that AAA was there instead.

Eventually, AAA showed up from camp early, and confronted Chadley. With the help of his robotic hover chair, AAA overcame him, and sent him flying into the ocean near Roo Island. With Chadley gone, AAA helped Abigail finish the Daily Dare.

After two and a half years without running a Daily Dare, the event finally returned with Abigail organising the event to cure what she thought was AAA's depression. In fact, AAA had secluded himself on returning from Camp Wannamakeagame in order to work on Project X. The pair stayed in the Royal Neopian Neolodge hotel while playing games across the planet.

Abigail's plan worked, as this greatly improved AAA's mood as he found the Daily Dare helped him complete Project X. Lulu, meanwhile, in an effort to find out what Project X was, began breaking into rooms in the Royal Neopian in the hopes of finding the plans. Some months later, it turned out Project X was in fact a new game by AAA: AAA's Revenge.

Before the event began, AAA and Abigail had a conversation on April 8th on Roo Island:

On April 9th, this was followed by another conversation:

On April 10th, another conversation followed:

Again, on April 11th, there was another snippet of dialogue:

Finally, on the day the Daily Dare started, April 12th, Abigail had one more thing to say:

Once the Daily Dare began, the pair continued to talk on certain days. On April 13th, they had this to say:

This was followed by another immediately after on April 14th:

Later, on April 19th, the pair continued to talk:

The next update came on April 28th:

AAA also started to draw on the map, first by adding an image of the Yoyo he previously mentioned:

The next day, April 29th, AAA drew a trophy on the map:

On May 1st, AAA had something else to say:

He also decided to write his initials over a portion of the map: 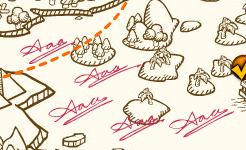 With the final challenge on May 2nd, AAA had more to say:

After the event ended on May 3rd, Lulu approached AAA about Project X:

After the success of AAA's Revenge, AAA went off to college. Chadley returned, intending to steal the event while he was away. However, Lulu investigated and discovered that he had in fact been cheating every single day of the event. Abigail and Lulu revealed this at a press conference, disgracing Chadley in public.

The dialogue began on Roo Island on March 16th between Abigail and Chadley:

Lulu then got involved on March 17th:

On March 18th, Abigail and Lulu got together to discuss things:

On March 19th, Abigail and Lulu continued their conversation:

On March 20th, Abigail and Lulu discovered Chadley's plan, and the conversation moved to the Daily Dare page between Chadley and Abigail:

On March 22nd, Abigail and Chadley continued to spar:

On both March 25th and 26th, an error caused text from 2016's Daily Dare to appear - featuring AAA. It is unknown if this replaced Abigail/Chadley dialogue that was meant to appear. Chadley and Abigail returned to normal service on March 31st. However, at this point TNT linked to a broken image in Chadley's portion of the dialogue, making it appear blank:

On April 2nd, Abigail and Chadley continued to fight:

On April 6th, again Abigail and Chadley continued to fight:

On April 10th, the event came to a close, and Chadley held his press conference with a special appearance by News-A-Roo:

The exact requirements for each Daily Dare vary year to year, but normally it involves sending a score higher than the one AAA or Abigail post in a specific game for that day (Abigail's scores being lower than AAA's). Jellyneo has guides to all past AAA challenges released so far.

This page was written by Herdy and last updated on October 4, 2018.