The Darkest Faerie was a game released for the Playstation 2 (in the US) on the 15th of November, 2005. The plot of the game serves as an introduction to the land of Altador and a prequel to the events of the Altador Plot. The game went through several versions, originally being intended for the Playstation One and featuring Grimilix and Sally as playable characters.

The tale began in Meridell, on the Ellis family farm. Tormund Ellis was dispatched on an errand by his father, Hubert. The young Lupe had to deliver a package to Meridell Town. On his way, Tor saw an old beggar being attacked by bandits. In return for helping out the old Techo (later revealed to be a disguised Kelland, legend of Altador), Tor received a special magical amulet before continuing on his path to Meridell Town. Upon reaching the town, Tor had his package stolen by Heermeedjet and Meerouladen. The Meerca Brothers tried to make off with their prize, only to be stopped by a mysterious old Lupe knight (King Altador, again in disguise). Tor continued on his way to the town's army recruitment centre, where he was mistaken for an applicant for the position of squire. With little other choice, and secretly desiring to be a knight, Tor completed the tests required to be a squire. He managed to secure sponsorship from Master Torak (a disguised Torakor), though still required letters of permission signed by his parents.

Tor returned to the Ellis family farm, only to find that his little sister Lucy had wandered off into Shadowglen Woods and had not returned. Tor ventured into the dangerous woods and saved Lucy from a monster named the Juppie Plant Beast. Proving that he was brave and responsible, Tor's parents agreed to sign his papers. Tor returned to Meridell Castle, hoping to become a knight. Meanwhile, far across the ocean, the evil Darkest Faerie rose from her 1000 year sleep at the bottom of the ocean.

It wasn't long before Tor was dispatched on his first mission, to save the town of Cogham from a band of Ixi Raiders. Tor succeeded in defeating their Chieftain. With his skill in battle proven, King Skarl promoted Tor to a fully fledged knight. Not long after, the Werelupe King attacked Illusen in her Glade, and King Skarl dispatched knights to aid her. Despite not being included in the original party, the old Lupe Knight convinced Tor that he should follow them anyway and help out. The Werelupes soon managed to capture the Knights, and it was left to Tor to free them all. The Werelupe King dispatched Gnarfas against Tor, while stealing Illusen's Charm. Things quickly went from bad to worse as the old Knight was struck down by the Werelupe King. The Darkest Faerie, in league with the Werelupe King, took her chance and possessed Illusen. Tor managed to defeat Gnarfas, but was forced to leave the Glade by the possessed Illusen.

With the Darkest Faerie's magic quickly spreading across all of Meridell, Tor made his way back to the Castle. There, he discovered that he had arrived too late, and the Darkest Faerie had already taken possession of King Skarl and his knights. The Darkest Faerie appointed the Dark Faerie Sisters (Spite, Malice, and Vanity) to watch over the castle as she made her way to Faerieland with the aim of defeating Fyora. Tor barely managed to escape the clutches of the Dark Faerie Sisters, with the help of a maid named Faun (Fauna in disguise).

Up in Faerieland, Princess Roberta of Brightvale, a trainee sorceress, arrived with her tutor, Seradar on a diplomatic mission. While exploring the city, Roberta came across an old Aisha (Jerdana, again in disguise) who gave her a magical amulet remarkably similar to the one Tor received. Though Fyora agreed to look into the dark clouds appearing over Meridell, the following night the Darkest Faerie arrived in the city and captured Fyora. The Darkest Faerie's powers of possession soon spread across everyone in the city, except for Roberta. The young Princess attempted to flee the city, and came across the old Aisha trapped by the Darkest Faerie. Roberta succeeded in freeing the old Aisha, and she directed the Princess towards Meridell in the hopes of finding the Lupe, Tor. Roberta managed to escape Faerieland on her Uni steed, Solarin, before being knocked off and falling down to Meridell below. 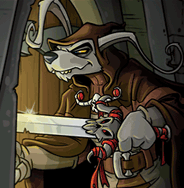 On the way, the duo entered the village of Bogshot, and cured the plague there. In the process, they defeated one of the Darkest Faerie's minions, Kastraliss. Doing so liberated the area from the Faerie's control. The path to Meridell was blocked by strong magic however, and it seemed that the only way to get past it was to recover Illusen's Charm from the Werelupe King.

Tor and Roberta ventured into the Werelupe Woods, where they found Sophie the swamp witch. She informed them of a secret way into the Werelupe Burrows. However, while searching for it, Roberta fell into a trap. Tor entered the lair and defeated the Werelupe King once and for all, recovering Illusen's Charm. With their leader gone, the remaining Werelupes scattered. Tor and Roberta returned to Illusen's Glade, rescuing Tor's family from Shadowglen Woods on the way and liberating the farmlands, and protecting the town of Cogham from a resurrected band of Ixi Raiders. When Tor and Roberta finally reached Illusen's Glade, they fought and defeated the Gelert Assassin before restoring Illusen. The Earth Faerie's magic liberated her Glade, while she gave Tor a Faerie Globe capable of removing the magic surrounding Meridell Castle.

The game came with a paper manual with some additional details not otherwise available. (Thanks to Pikachu315111 for the scans in this section!)