The Faerie's Ruin was a plot released on the 22nd of September, 2010 (Year 12), although teasers for the plot in the form of the Faerie Festival were released on the 17th of September. It lasted until the 26th of January, 2011 (Year 13) (although the plot steps were removed at 11:59:59 on December 31st), and was the first plot to include the Fearless Deeds page—a record of plot progress available before final points were awarded.

The plot began with all the Faeries of Neopia gathering together in Faerieland for the annual Faerie Festival. However, after the first weekend of celebrations, disaster struck as every single Faerie turned to solid stone. Panic quickly set in across Neopia, and several well known leaders made their way to Faerieland to investigate.

King Jazan of the Lost Desert was the first to arrive, but found an Ixi thief looting the helpless statues of the Faeries. Jazan chose to observe the thief in secret until King Altador, his guards, and Captain Brynneth from Brightvale arrived to conduct their own investigations. The gathered heroes captured the thief, and Brynn revealed his name to be Hanso - a thief that she had considerable experience with in Brightvale. Hanso claimed to know who was behind the petrification of the Faeries, and offered to explain.

Hanso claimed that he had seen Hubrid Nox casting a spell with a strange mirrored artefact on the outskirts of Faerieland, and that the spell caused the Faeries to turn to stone. Although skeptical of Nox's involvement, the gathered heroes agreed to take Hanso at his word, and consulted Xandra, a mage King Altador had brought along from the Haunted Woods. They found Xandra in the Faerieland library, along with a blind old Ogrin from Shenkuu. Far from being happy to see Hanso, Xandra instead exploded with rage - he had stolen artefacts from her home soon before the spell had been cast on the Faeries. Among those he stole was the mirror artefact, the one he had claimed to see Nox using in Faerieland.

Hanso quickly changed his story, claiming that far from being an innocent bystander, a fellow thief had actually put him in contact with Nox to sell the artefact. King Altador saw only one option - travel to the Haunted Woods and confront Hubrid Nox.

The party reached Nox's Castle without incident, but as Altador planned his attack, Hanso broke away to attempt his own break in - followed by Brynn. Inside the castle, Hanso was found by Hubrid, who surprisingly didn't seem to recognise the young Ixi. As Hanso attempted to press Hubrid for answers, Xandra tripped one of Hubrid's traps outside the castle, stunning her and alerting the warlock. With no other option, King altador ordered the remaining heroes to storm the castle - unfortunately, they encountered more traps, being sealed in the castle's rooms. Meanwhile, Hubrid escaped down a hidden passage, pursued by Hanso and Brynn. There they discovered a control device for Hubrid's traps, and were forced to call off their pursuit to help their friends. With all the heroes seemingly occupied, Hubrid made good his escape into the woods. However, he soon came across an exact duplicate of himself, barring his path. The duplicate attacked Hubrid with powerful magic, killing him on the spot.

At around this time, Laela, a young Faerie Ixi, set off from Faerieland to conduct her own investigation into helping the Faeries. Instead of Nox, she visited Balthazar, having heard that his bottled Faeries were immune to the magic that had claimed the rest. Unfortunately, she discovered that the bottles only protected the Faeries while they were trapped - as soon as they were released, they turned to stone. Balthazar discovered Laela, and insisted she took him to Faerieland so he could see the Faeries himself. Though Laela hoped he would help his sworn enemies, instead Balthazar merely laughed.

Back at Nox's Castle, the heroes managed to solve Nox's puzzle and escape, reuniting with Xandra on the outside. As they set about making camp, Hanso noticed that dark purple clouds were surrounding Faerieland, providing the first signs that the lack of magic from the Faeries was having dire effects. As the heroes attempted to discuss the situation, strange Shadow Wraith creatures appeared and attacked them.

The heroes fought valiantly, slaying thousands of the creatures, but more kept coming. Eventually, the heroes managed to gain a brief respite. Brynn suggested that Altador and the others create a diversion by attacking the Wraiths while she headed to Brightvale in the hopes of finding a cure for the Faeries. Taking Hanso with her to lock him in the castle's dungeons, they set off for Brightvale. Xandra tagged along, aiming to return to her hut in the Haunted Woods and consult her own magic books. Xandra soon left the duo as they entered Brightvale, and Brynn observed that the castle seemed more grey than usual, as if some of the magic had been sucked out of it. She locked Hanso in the castle's dungeons, before heading to the Finneus J. Scrollbottom Auxiliary Surplus Archives and search for a book with the help of the new librarian.

With the book in hand, Brynn returned to Hanso. However, a new batch of shadow creatures, known as Shadow Spectres, began to attack the city. Brynn headed off to fight them, leaving the book with Hanso. The thief soon escaped, and joined Brynn in battle. The two were quickly overwhelmed, with Hanso making a quick escape from the castle. He came across the Shadow Spectres in the forest, dragging Brynn into a cave. There she was reunited with Xandra, who claimed to have been similarly captured. Hanso followed soon after, and the three hatched a plan to escape, and breach the magical barrier surrounding the cave's entrance. Hanso succeeded in rescuing the other cave occupants and they all escaped using Xandra's magic.

Following a map in the book from Brightvale, the three headed towards an old set of ruins, which Hanso claimed were once a Thieves Guild base of operations (when he was a member). They explored the ruins, and came across more shadow creatures. While Brynn held them off, Hanso and Xandra located a second mirror artefact similar to the first - as the three made their escape from the ruins, Xandra explained that the two artefacts were related, and the second may be able to undo the magic of the first. They headed back to the Haunted Woods to reunite with the other heroes, but above them Faerieland began a descent from the sky. Without the magic of the Faeries, it was falling.

The heroes left the woods, needing a wide open space to cast Xandra's spell. As Brynn and Hanso helped her with the artefact, the other heroes battled a third wave of shadows - Shadow Phantoms. As much as they fought, more shadows appeared to take their place. Eventually, the dead remains of the shadows joined together, forming a singular sentient shadow warrior who called himself Oblivion. Xandra's spell reached completion, but with disasterous results. A new spell ripped through the clearing, turning all of the heroes except Hanso, Brynn and Xandra to stone. With one spell, Xandra destroyed most of the remaining shadows and turned to face Hanso. As Faerieland crashed to the ground behind her, she revealed her true colours - Xandra had been working against them all along.

In the aftermath of the crash, Xandra explained her motives. In her youth she had been tutored in magic by the Faeries, and saw the full extent of their powers. More importantly, she saw that sometimes they did not use their powers to help Neopians in need. She viewed them as tyrants with a magical monopoly, and wished to remove them completely. She impersonated and killed Nox, and planned to rule Neopia without the help of the Faeries - the two artefacts she had boosted her magical abilities, giving her the power she needed to turn all of the Faerie to stone. Xandra joined the two parts of the artefact together, and gave Brynn and Hanso an offer - to join her. Although Brynn quickly refused, Hanso appeared to agree, shaking Xandra's hand.

Hanso's deception was quickly revealed though, as he stole one of the two artefacts from Xandra. As Xandra summoned up Oblivion again using her half of the artefact in order to keep Brynn occupied, she focused all of her magical abilities on Hanso, intending to turn him to stone. Hanso defended himself with his stolen artefact, which gradually absorbed more and more of Xandra's magic. When it was charged with enough energy, Hanso plunged a broken sword into its heart, smashing the mirror and releasing the magic stored within. The resulting magical flash petrified everything in the immediate area. As Oblivion crumbled, Brynn discovered that not only Xandra, but also Hanso had been turned to stone.

With Xandra petrified, her magic began to erode, freeing the other heroes and the Faeries. Fyora herself arrived, and after hearing Brynn's story, decided to unpetrify Hanso for his heroism.

As the Faeries began to rebuild their home, Fyora took Xandra's statue into her care, hoping that she could be rehabilitated in time. At the same time, she gave Hanso the title of Master Thief, and appointed Brynn as a Captain of the Guard in Faerieland. Together, they were tasked with hunting down Faerie artefacts that could be dangerous. Jazan meanwhile returned to Qasala to be with Nabile, the Ogrin master began to teach his students in Shenkuu how to defend themselves against Wraiths, and King Altador set out on a new quest. Apparently, the statue of the Darkest Faerie had mysteriously disappeared when Faerieland crashed...

Users participated in the plot by completing several puzzles or by fighting in the Battledome. As a first for this plot, Fearless Deeds were introduced. These were achievements awarded for doing specific activities during plot steps. It was these Fearless Deeds, in addition to Battledome Challenger caps, that determined final plot points. It is known that between 75,955 and 78,478 people took part in the first two battledome steps of the plot.

After the plot ended, prizes were released. Users could claim them in a prize shop using points accumulated throughout the plot.

Trophies were also available, based on plot points:

In addition, everyone who completed at least 1 Fearless Deed was awarded an avatar.

Awarded to users who participated in the Faeries' Ruin plot. If you took part you can claim yours at the plot prize shop.

Along with the avatar, users were awarded the Faeries' Ruin site theme. 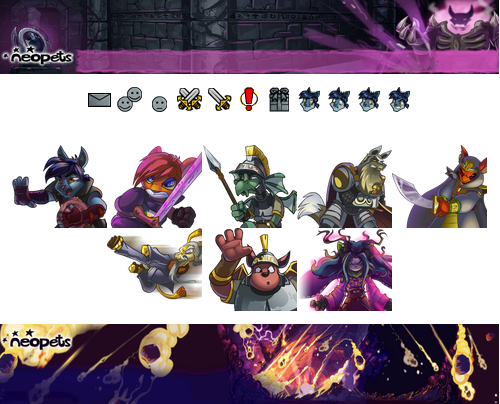