Krawk Island's Disappearance was an event that began on the 20th of July, 2011 (Year 13), though teasers were released in the build up to the event on the 14th of July. It lasted until the 8th of August, and included a revamp of the Krawk Island map.

The event began with huge tentacles rising out of the ocean to attack Krawk Island. The huge beast, or Krawken as it became known, appeared to tear the island to pieces, before vanishing a week later just as suddenly as it had appeared. Only a small islet remained where Krawk Island had once been, and only one survivor - Gavril McGill.

With the help of the crew of the Surly Peadacle, one of the few ships remaining in Krawk Island's former waters, Gavril began to organise a search for the missing island. As reports came in from returning searches, it became clear there were now several small islets strewn across the ocean. Meanwhile, Gavril discovered an old book in his shack detailing the ancient history of Krawk Island. It claimed that Krawk Island had originally been a series of small free-floating islets that banded together after attacks from a pirate named Sherman.

With the discovery that the islets being found were in fact the remains of Krawk Island, Gavril ordered them towed back to his home so that the restoration could begin. It seemed that Gavril had new ideas for the island though, reshaping it as he saw fit and deciding that he should be the new Governor once everything was said and done. On the day before the new island was completed and anchored to the seabed, he dispatched his cronies to all corners of the island to ensure that any rebellions against his rule were put down swiftly.

With the new Krawk Island revealed, and Scurvy Island now positioned nearby, Governor McGill invited his helpers to his new mansion to reward them—and decided that continuous efforts would be needed to keep Krawkens away from the island's anchors and keep the island safe from another disaster.

The event was split up into two distinct activities, with a new daily puzzle for participants. In the first element, users searched for islets in a variant of the Buried Treasure game. Once all islets were recovered, the second phase of recovery began, in which users had to solve a small sudoku puzzle based around arranging crew members on board the Surly Peadacle that became known as Crewdoku.

In the aftermath of the event, Anchor Management was opened up as a new daily.

After the event, prizes were awarded on the disappearance page, along with an amount of Neopoints based on participation:

Along with prizes, an avatar was also awarded to all participants:

Awarded to users who visited the Governor's Mansion after participating in the Krawk Island Disappearance event.

Also awarded to those users who completed all activities on the day of release was the Krawk Island site theme. 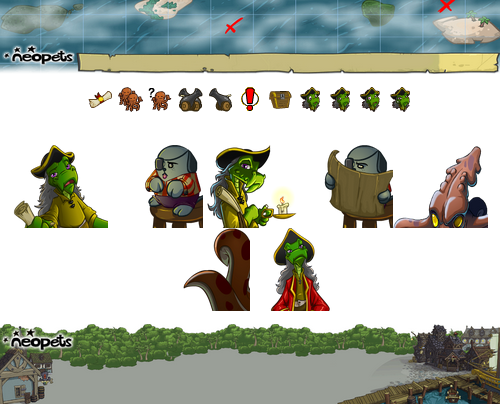