Lyra and the Lost Heirloom

Lyra and the Lost Heirloom was a mini-plot released on the 19th of November, 2018 (Year 20), although a small lead in was released as part of a Lost Desert map revamp on the 9th of November. It lasted until the 2nd of March, 2019, and served as a loose tie-in to the events of Legends and Letters, a story based mobile app.

The story began in the month of Gathering, with tensions rising in Sakhmet, in the Lost Desert. The residents thought that the city's relationship with the neighbouring city of Qasala was too close due to financial aid being sent to Qasala to help with their continued rebuilding efforts following the Lost Desert Plot, and began protesting in the streets. This eventually reached a head in the Month of Storing when Sakhmet traders began refusing customers from Qasala. The riots grew, and the Royal Guards sided with the protestors, putting the royal family and Queen Amira under house arrest and assuming control of the city themselves. The Lost Desert Daily, a local newspaper, began to document the events happening in the city.

Queen Nabile of Qasala called the Warden of the Lost Desert, Aymas Xendrik, to Qasala in order to discuss an effort to resolve the situation. Although Nabile worried about her informants suggesting that Aymas may be a corrupt official, allowing the protests to continue deliberately, the Warden assured her he had a plan to ease the tensions. He planned to send his daughter, Lyra, to study under Qasalan Generals, hoping that would be enough to stop the people protesting about increased Qasalan influence over Sakhmet.

His plan quickly fell apart, however, when Lyra ran away from their home in Sakhmet. Fleeing her father's abusive upbringing, she hoped to make it to Altador and safety, taking the family's heirloom sword that had previously been on public display in their home with her. She quickly came across problems, being unable to climb the wall of Sakhmet to escape the city without the help of a local thief named Aurrick. Aurrick helped her get over the wall and distracted some Qasalan soldiers that had come to escort her to her new home in the other city. 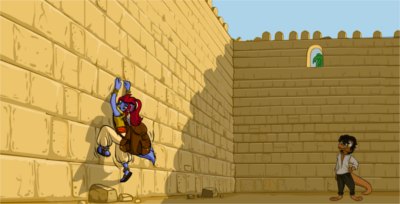 Events within Sakhmet quickly got worse, with the leader of the Royal Guards that joined the riots, General Aharoon, establishing a full military coup and beginning to be tyrannical with the citizens who previously supported him. He increased taxes, and began raiding shops within the city. Aharoon, meanwhile, attempted to threaten Queen Amira into giving him access to the Sakhmet treasure house, something she refused to do. Her personal guard, General Dacon, temporarily managed to lock Aharoon out of the palace, and launched a desperate plan to save the city. He instructed the palace magician to send messages to a local thief to locate the long missing royal sword known as Blaze, and to Princess Vyssa in the hopes she could somehow get a message to Qasala asking for help.

A mysterious Ruki trader who claimed to deal in rare swords, but actually the palace magician, approached Aurrick and offered him gold to steal the Xendrik family sword from Lyra. Aurrick readily accepted, hoping to use the money to reunite with someone in his family. Lyra, meanwhile, quickly became lost in the desert, not having taken any supplies with her and largely being unable to navigate. Aurrick found her and offered to guide her, but the pair were forced to flee when Aymas and the Qasalan soldiers located them. The pair managed to lose them by passing through the nearby Ruins of Thanyros.

Lyra and Aurrick rested for the night nearby, and although Aurrick seemed to bond with Lyra by offering her the sentimental spoils from his first ever theft, while she slept he nevertheless stole the Xendrik sword from her and returned to Sakhmet. After getting his payment from the Ruki, he set off towards Krawk Island. 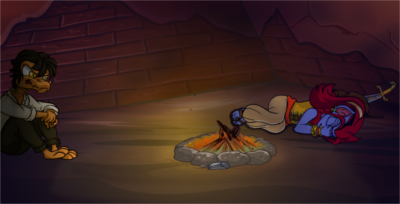 Lyra woke to find the sword missing, and was soon found by the Qasalan soldiers and Aymas, who rather than try to convince her to return to either Sakhmet or Qasala, attacked her. Lyra managed to fight them off, and successfully ran for the river, where a passing boat captain offered to take her to a nearby safe refuge.

After reclaiming the Xendrik sword, Dacon discovered it was the missing royal Blaze sword. He seemingly tried to flee the city with it, using the same secret passage he used in the Lost Desert plot, but then saw that the other half of the plan had worked. Vyssa had sent a message to Qasala and King Jazan had answered by sending in the Qasalan army.

The leaders of the military coup in Sakhmet opened the doors to the city and the Qasalan soldiers stormed in to liberate the city. Dacon joined them, using the Blaze sword. Seemingly, in the hands of those who protect the Sakhmet royal family, it has the ability to set itself on fire. 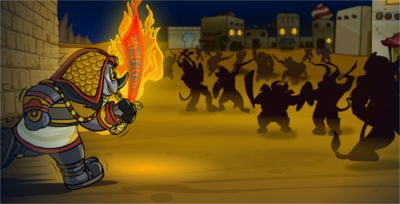 With the help of the Qasalans, Dacon was able to defeat the leaders of the coup and restore order to Sakhmet. General Aharoon and all the soldiers who helped him were arrested, with General Dacon being reinstated as head of the remaining army. Meanwhile, the Qasalan army took Aymas into custody. A meeting of the Lost Desert Alliance, seemingly a council of city-state leaders that he answers to, was convened to place him on trial for aiding the coup and for corruption. Following this, the position of Warden of the Lost Desert was made electoral.

Users participated in the plot by reading the story chapters, and completing two mini-games tied to the plot. Points were awarded based on achievements completed in these three areas.

After the plot ended, several prizes were awarded based on the number of achievements completed. In an usual development, a preview of the prize shop was released during the plot so the prizes were known about in advance.

The following items were made available in the prize shop:

Anyone who spoke to the Ruki Merchant to begin the plot was awarded with a site theme that was automatically unlocked. 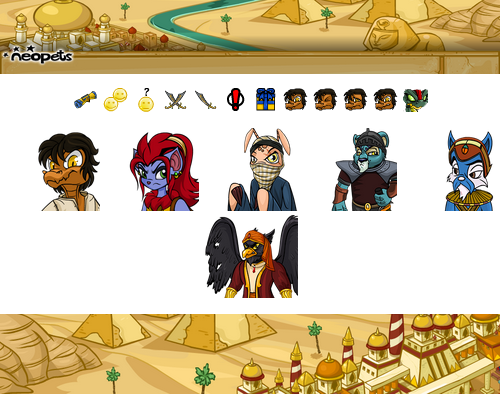 This page was written by Herdy and last updated on February 12, 2020.