Neopets Puzzle Adventure was a console game released in late 2008 for the Nintendo DS, Nintendo Wii, and the PC. It was the first Neopets console game to be released outside of the US. Although there are differences in the gameplay between the three versions, the story remains identical.

The story began with an adventurer making their way to Shenkuu (the player's character, with a custom name, species, and colour). There, Shumi met the adventurer, and introduced him/her to the land of Shenkuu. The adventurer proceeded to perform favours for various inhabitants from the city, including Linae, Kentari, Hoban, Anshu, Orrin, and eventually Captain Tuan. The adventurer helped to stop a group of bandits who had set up in the city, and not long after a mysterious meteor crashed nearby. The adventurer and Kentari proceeded to investigate the crash site, only to witness the meteor transform into a Rock Beast. Many more meteors soon followed, and Shenkuu was thrown into a state of panic. The order to evacuate was issued, and the crew of the Cyodrake's Gaze along with the adventurer prepared to leave the city. On their way out, they came across a Lupe named Greyfang, who feared that the Rock Beasts were after a strange talisman he found in Tyrannia. Another creature in league with the Rock Beasts, known as Embraxus, attacked the Cyodrake's Gaze. The adventurer managed to defeat it, but the ship was badly damaged, and forced to set down in the Lost Desert for repairs. 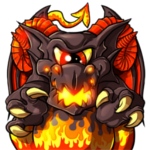 Not long after arriving in the desert, the adventurer helped defeat yet another clan of bandits, and set off across the dunes to the city of Sakhmet. There s/he discovered that a giant Rock Beast known as Calciferous was attacking the city gates. A Fire Faerie named Eithne offered to help the adventurer defeat the giant Rock Beast, and together they located a method of weakening Calciferous long enough for the adventurer to deal the finishing blow. With the city saved, the adventurer was given an audience with Princess Amira herself. Eithne revealed that there may be a second amulet, similar to the one Greyfang found, hidden in the catacombs beneath the palace. Together with the crew of the Cyodrake's Gaze, Eithne and the adventurer set off to locate it. In the depths of the catacombs they located the undead guardian of the second amulet, Mahut. However, Eithne then chose that moment to seize the second amulet and turn against the group, claiming to be working for the same being that sent Calciferous. She attacked the group, but the arrival of another Fire Faerie, Nuria, forced her to retreat. Nuria ordered the crew of the Cyodrake's Gaze to set course to Mystery Island, claiming that Eithne was working for the shaman named Tura-Kepek. Together, they planned to use all of the magical amulets to awaken the sleeping monster named Moltenus from the depths of the volcano.

On the island, the group came across the Island Faerie, Jhuidah, who explained that with all six wards in his possession, Tura-Kepek would be able to awaken Moltenus whenever he wished. As Nuria, Jhuidah and the crew of the Cyodrake's Gaze began to evacuate the island's inhabitants, the adventurer set off alone into the jungle, hoping to stop Tura-Kepek. The adventurer managed to defeat Moltenus in battle, although as Jhuidah warned, the volcano's lava began to heal the creature out of his weakened state almost immediately. The adventurer raced to the peak of Techo Mountain, knowing that the only way to stop Moltenus was reclaiming the six amulets.

At the mountain's peak, the adventurer fought the guardians of each of the wards, and in the process destroyed them:

The adventurer then came across Eithne, and the fifth amulet. Rather than let herself be destroyed, the Fire Faerie flew into the volcano with the amulet, hoping that combining her powers with its magic would protect her from the lava. It is possible she survived, but she did not return to the surface. The adventurer then continued to the top of the mountain, and challenged Tura-Kepek directly. The adventurer defeated the shaman, and destroyed the last amulet. With the source of his power gone, Tura-Kepek vanished, and Neopia was saved once more. 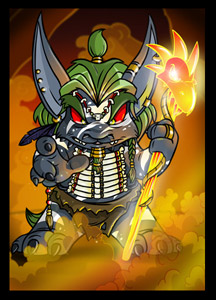