Quizara's Curse was a console game released for the Leapfrog Didj on the 10th of January, 2009 (Year 11). The gameplay consisted of simple word puzzles aimed towards young children, as with most games for the Didj.

The story began with the mysterious sorceress named Quizara arriving in Faerieland. She proceeded to use the Sceptre of Questions to cast a powerful form of magic known as a Question Curse. The curse effected primarily Faeries, and they fled to the far corners of Neopia in the hopes of avoiding the magic draining effects of the curse. Unfortunately, the curse's magic proved too strong, and the Faeries were struck down no matter where they had fled to. Soon after this, Quizara used her magic to seal the entrance to the Faerieland castle, using the power of the Question Curse as the lock. 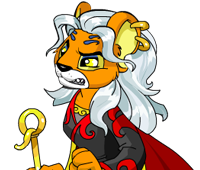 Soon after this, a lone Neopet with some basic magical talents set off on a quest in Meridell to free the Faeries (the player's character, with a custom name, species, and colour). The hero began in the area of Meridell known as Greenfield, attempting to use some earth magic to free the local Earth Faeries. The hero managed to free the Faeries from the curse, moving on to do so on Stonewatch Road and then the Mystic Grove. Freeing all the Earth Faeries, the hero sent them to Faerie Haven, a hidden location in Faerieland where they would be safe from Quizara's power. The final Earth Faerie blessed the hero with some water magic, allowing them to cure the Water Faeries.

After the Light Faeries were freed, the hero gained fire magic, and their quest to free the Fire Faeries took them to Mystery Island. Adventuring through Goldsand Shore, Rockriver Pass, and the Deep Grove, the hero freed the Fire Faeries - gaining air magic in the process. 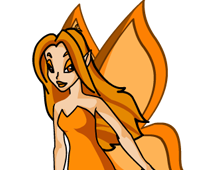 The hero then retraced their steps through the three lands to free the Air Faeries. Doing so granted them dark magic which they used to free the final elemental Faeries - the Dark Faeries. With all of the elemental Faeries freed, the magic binding the gates to Faerieland was broken. The hero managed to reach Faerieland, crossing through the city to Fyora's old throne room - now occupied by Quizara.

The hero faced Quizara directly, using the elemental magic they had gathered from the Faeries during the adventure to counter the magic of the Scepter of Questions. In the end, it took one spell of each element to defeat Quizara - the Scepter of Questions breaking and disappearing. The Question Curse was lifted, and without her magical artefact Quizara was rendered powerless. She managed to escape the city, however, slinking away from Faerieland in the confusion.