The Ski Lodge Murder Mystery was the second staff event to run on the site, and began on the 2nd of February 2001 (Year 3) and ended on the 25th of May. It was the first plot to run in Year 3, and featured 32 staff members taking a well earned break at a Ski Lodge on Terror Mountain.

The story began with the Neopets team taking a well earned break in a Ski Lodge. The insides of which appeared to point to Dr. Sloth being a former owner of it. The Thursday after arriving however, disaster struck, and Electric Blue Monkey was found dead at the bottom of the stairs. Rumours began to circulate that he had in fact been pushed, rather than falling. The following Monday, Black Widow was then found dead in the same location, having been strangled. This confirmed that a killer seemed to be loose among the Neopets team. The race was on to find out who. Over the coming weeks, the killer struck again. 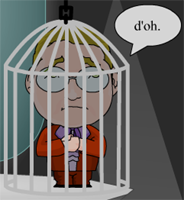 I would have gotten away with it too, if it wasn't for you pesky staffers!

The Beader quickly alerted authorities, and Maverick was taken into custody. However, as he was led away, he exploded, revealing that he had been a robot all along. As the authorities soon discovered, the real Maverick had been murdered long before the staff even arrived at the Ski Lodge. The final scenes of the plot showed that the one who ordered the robot Maverick's destruction was none other than Neopia's nemesis - Dr. Sloth.

Like many staff competitions, users took part in this plot by guessing the eventual winner. Users could change their votes every week, but those who consistently guessed correctly received higher prizes. Users could also send in questions for staff members to answer, with the aim of discovering which was the murderer.

This was the first Neopets plot to hand out prizes and trophies, but the exact system used is unknown. They were:

There were also two prizes that were never released. It is unknown why. They were:

This page was written by Herdy and last updated on December 11, 2020.