The Spooky Food Eating Contest was an event that began on the 24th of September, 2013 (Year 15), and lasted until the 1st of November. It was described by TNT as an event, but they also claimed to like the term 'plevent' for it - indicating that it was a mixture of plot and event.

The story began with the Spooky Shindig Society organising the first ever Spooky Food Eating Contest in Neovia. The judge, Tippens, invited visitors to cheer or boo at the four contestants: Moloch, Mrytle, Scarlet, and Turfy. At the conclusion of the contest, Scarlet was crowned as the winner - but the joy was short lived. Almost immediately, Scarlet transformed into a monster and attacked those visiting the area, before fleeing into Neovia and destroying Saskia's cart.

In the aftermath, two Neopets remained at the stand - Corbin and Kell. They were brothers, monster hunters who had laced the food with a potion intended to knock out the monster, but a mistake in measurements had only caused Scarlet to revert to her true form. As Corbin disappeared into Neovia to locate the monster, Kell enlisted Tippens and his substantial basement to form a new plan - using musical plants to lull Scarlet into a gentle sleep. After working out the proper melody, Corbin reported back to say that he had tracked the monster back to its lair, a crypt on the outskirts of Neovia.

On the suggestion of Tippens, the pair went to see Baffington, a local eccentric. Baffington, upon learning of Corbin and Kell's lineage as monster hunters (their father had captured the Hairy Tongue Beast), told them the truth. The Catacombs Corbin had seen were in fact Vaults, constructed by an exiled family of dark magic users long before Neovia was founded. The place was filled with traps and curses, made more powerful by a confluence of leylines in the area. Recruiting Baffington and Tippens to help, the four of them headed to the Vault entrance. Tippens remained above ground to over the exit whilst the others went in to search for Scarlet.

The Vaults were not as empty as originally claimed. Alongside the traps, dragons, giant Globilols, Non-Cubes, skeletons, tourists, kids, The original Ghoul Catchers, and a variety of cultists including the Appreciation of Toes waited behind every single door. After exploring for days, Scarlet was eventually cornered and forced to sleep using the magical plants. With her captured, Kell and Corbin took her to a secret valley hidden in the mountains between the Haunted Woods and Shenkuu filled with a clan of similar looking monsters, where they reunited 'Scarlet' with his parents.

The storyline of this event later became the basis of the Grave Danger daily.

Users participated in this event by completing three individual steps. In the first step, users picked which of the four contest participants to support, and either cheered them on (to increase the speed of their eating), or booed the others (to decrease their speed of eating). This was a community activity, with the actions of individuals effecting the rate of eating for all users. It did not matter who users actually picked, only if they took part.

The second step, known as the magical melody, involved arranging plants in a grid and searching out the correct location for each plant on the grid. This puzzle repeated each day, gradually increasing the size of the grid and the number of plants upon it.

The final step involved exploring the Vaults themselves. Users opened doors using one of three presented options, and if they picked the correct option, they received a treasure. If they picked a wrong option, they received a curse that had a variety of negative (or sometimes positive) effects on exploration. The Vaults continued deep, with users recording up to floor 130 by the end of the event. On October 30th, no matter what floor you were currently on, the monster would appear within the next few floors. At that point, users could either set up an elaborate trap or throw a rock at it (the same result for both), before using the melody and ending the step.

After the event ended, prizes were awarded.

An avatar was released for some of those who took part, though the exact requirements are unknown.

Awarded to participants in the Spooky Food Eating Contest in October 2013. Exact requirements were unknown.

All those who completed at least one step were also awarded the Monster Hunting site theme. 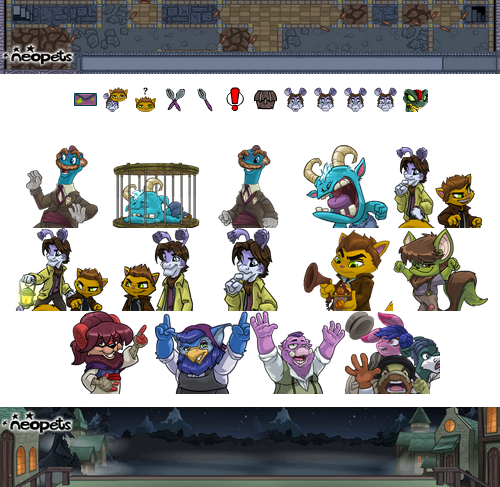