The Tale of Woe began on the 3rd of October, 2006 (Year 8), and lasted until the 21st of November. It served as the introduction to the mini-world of Neovia, and was the last plot to be accompanied by a Trading Card Game extension.

The tale began with Gilly, a traveler who had narrowly escaped the Castle of Eliv Thade, coming across a Wanderer Camp in the Haunted Woods. As she sat around the camp fire to warm herself, one of the Wanderers offered to tell her a story about the town of Neovia.

The story focused around one family living in the town. Bruno, the eldest child, wished to be stronger so that he could win the hand of Lily, his love. He was approached by a mysterious stranger, Mr. Krawley, who offered him an elixir of Hissi Oil, which would grant his dreams. Overnight, Bruno transformed into a more athletic figure, and informed his father of the strange man. Edmund soon sought out Mr. Krawley, and took the potion to achieve financial prosperity. Soon, word spread around the town, and all of the inhabitants began drinking the potion. Seemingly the only person in the town who did not take a sip was Bruno's younger sister, Sophie.

Soon however, the potion's effects took a startling turn, beginning to mutate the townsfolk into horrible creatures. Finding that Mr. Krawley had disappeared, the people of Neovia turned their attention to Edmund and his family, intending to make them the scapegoats for their mutation. With Sophie the only one in the town unaffected, Bruno asked his brother, Reginald, to take her away from the town. In the woods, the pair came across Ilere, the feared Earth Faerie. She offered to take care of Sophie, as Reginald returned to the town to help his family. Back in the town, the townsfolk cornered Bruno, and he was forced to flee into the woods to protect himself. With Bruno gone, Mayor Thumburt proposed a solution - summoning the fabled Spirit of Slumber to aide them. The Spirit agreed to lift the curse, provided the townspeople paid a terrible price. They would become ghosts, and haunt the town of Neovia for one night each year, Halloween.

With the Wanderer's tale over, Gilly continued her adventures into the Haunted Woods the following morning. It wasn't long before she came across the ruins of Neovia, and found a locket within them. Hoping to find answers about the locket, she eventually made her way to the shack of Sophie the Swamp Witch. The Witch seemed to recognise the locket, and grew angry, forcing Gilly out of her shack. The young Usul was forced to take refuge in a cave for the night. There, she found a horrible monster, and managed to knock him out briefly, before fleeing back to Sophie with the monster in tow. Sophie answered the door, only to recognise the monster as Bruno, her brother.

Sophie explained that Ilere had given her some basic magic ingredients, putting her on the path of witchcraft. Though she had tried to make a cure, she had always failed. Gilly, having heard the Elephante's tale, suggested they find Ilere and ask the Faerie about the Spirit of Slumber. Ilere proved typically unhelpful, saying only that the Spirit was a powerful ghost, and only old inhabitants of the woods would know more.

When the Brain Tree and Esophagor proved equally unhelpful, Sophie suggested that she may be able to find his name if they had access to his bones. Unfortunately, that meant digging up every single grave in the Haunted Woods until they found him. 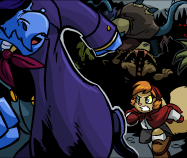 The Spirit's name was eventually found to be Jubert Igig. Sophie then concocted a potion to summon the Spirit, which Bruno drank. The summoned Spirit agreed to lift the curse of Neovia, before leaving Bruno's body. Though the people of Neovia returned to the world of the living, they also mutated back to their horrible forms. Once again seeing her family mutate, Sophie ran away from the town screaming, leaving Gilly and Bruno alone. As the townsfolk closed in, Bruno caught sight of Mr. Krawley, and instructed Gilly to chase after him.

Krawley led Gilly to the abandoned Meepit Oaks Sanitorium on the outskirts of the town. There, Gilly uncovered the story of Lucy, a nurse who was left with only the Janitor, Miles, Dr. Valus and a mysterious Dr. Alexander (an alias of Krawley's) when the other doctors disappeared. Alexander soon followed suit, leaving Lucy with a mysterious flower, before both she and Miles met grizzly ends at the hands of the former inmates. Gilly found the body of Lucy, and the still thriving flower, before returning to Neovia. On route, she found Sophie, who recognised the flower as the missing ingredient she needed in order to lift the curse. The witch finished her potion, and the two proceeded to the town.

Sophie planned to put the potion in the town's water supply, but found her path barred by the mutated Mayor Thumburt. With help from Bruno, she was able to turn the Mayor into a Petpetpet, and add the potion to the town's well. The following morning, the town had returned to normal, however Bruno remained cursed due to his increased exposure. As Sophie prepared to say goodbye to her family and return to her shack, Mr. Krawley looked on from a distance, the entire situation having seemingly occurred according to his plan.

In the aftermath of the battle to save Neovia, the Elephante Wanderer mysteriously disappeared from the Wanderer Camp. When quizzed about his whereabouts, the other Wanderers said there had never been an Elephante in the camp...

Users participated in this plot by progressing through a series of puzzles and Battledome fights. It involved a lot more mixing puzzles than previous plots. Like the Lost Desert plot, there were also several optional steps, in this case, digging graves, creating potions, testing bones, and cross-referencing names, all during the Graveyard sections of the plot. TNT later released a solution to this plot.

Battledome challengers were also released at certain points during the plot, and unlike in previous plots, Win Limits were introduced, which essentially capped the amount of points users could earn from Battledome sections. The challengers were:

Mayor Thumburt was released as the final boss, with 3 progressively difficult forms. Unlike previous challengers, users were awarded points for losing to him, as each loss would lower his total hitpoints, and allow subsequent users a greater chance at defeating him.

After the plot, a prize shop was released based on participation.

Trophies were also awarded based on plot points earned.

In addition, any user that had at least 1 plot point was awarded the following avatar:

Awarded to users who participated in the Tale of Woe plot. You can collect yours by visiting Sophie's Shack.

And finally, anyone with 1 plot point was also awarded the Tale of Woe site theme. 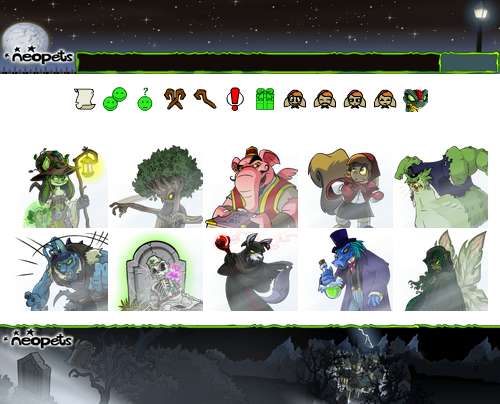 This page was written by Herdy and last updated on January 28, 2021.