The Volcano Mystery was a puzzle plot released on September 23rd, 2003 (Year 5). It is the last plot of its type to be released to date, and lasted until October 18th, 2003. Amongst other things, this plot was the first to have an accompanying Neoboard created for it, a tradition that only became constant during the Hannah and the Ice Caves plot.

The story began with the disappearance of the Tiki Tack Man on Mystery Island, with his tombola stall being mysteriously deserted. Soon after, the Techo Master disappeared from his training school, with signs of a struggle. Those with sharp eyes noticed footprints heading to the north - towards the Volcano.

At around this time, a Faerie named Eithne took up residence at the volcano entrance, claiming that the volcano had become dangerous, and Queen Fyora herself had dispatched Eithne to stop people going inside. Not long after Eithne's arrival, the Island Mystic also disappeared, with Mora informing frantic searchers that there was a struggle. The only clues were two sets of footprints, and a mysterious red feather.

The kidnappings continued, as the Tiki Tour Guide disappeared, and his cart was destroyed. While Neopians managed to find a path into the volcano that Eithne was not guarding, Jhuidah was the next islander to disappear. She left only a burned note in her wake:

By visiting the parrot on Mystery Island (who provided clues during the Hunt for the Crown plot), further clues as to the contents of the note were revealed. Jhuidah was soon found in the Rock Pool, trapped in one of the bowls. Mixing the ingredients from the note to form a Tagobo Potion allowed Jhuidah to be freed.

Jhuidah was able to partially explain the situation - claiming that an evil shaman was behind the kidnappings, and that they were not random. The five missing islanders were all guardians to an ancient seal in the volcano, something keeping back a terrible monster. Jhuidah later produced a note: 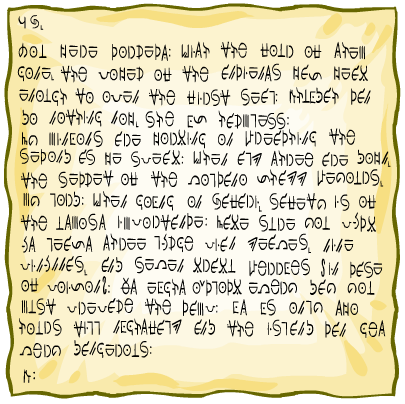 You were correct: with the four of them gone, the power of the ancients was weak enough to open the first seal: Jhuidah can do nothing now, she is harmless: My minions are working on reaching the second as we speak: when all three are down, the secret of the volcano shall be yours, my lord: when going on safari, safety is of the utmost importance: make sure you pack at least three large pian leaves, nine Pinannas and seven kraku berries in case of poisons. At 8 o'clock every day you must prepare the camp. . It is only two Hours till nightfall and the island can get very dangerous.

As if to further complicate matters, Eithne the Fire Faerie was soon spotted inside the volcano, trying to perform some magic. Rumours began to spread that in fact she was not working for Fyora at all.

The Island Mystic soon returned, and confirmed Jhuidah's story. He revealed that each of the kidnapped islanders held part of a code phrase that would be able to weaken the shaman. At the same time, the Tiki Tack Man returned, but with a very different mask...

Asking Sarah the Zafara for help finding the Tiki Tack Man's old mask resulted in her entering a strange trance, and directing Neopians to the Haunted Woods. In the depths of the Fetch! maze, the Tiki Mask was recovered. The Tiki Tack Man was restored, and provided his secret word. Jhuidah meanwhile couldn't remember hers, suggesting that the word itself may have been removed from Neopia.

The Tiki Tour Guide meanwhile was still lost, and a clue eventually surfaced in the form of Jhudora, who bought a talking statue on the island that kept screaming help so much that she gave it away. Finding the strange statue in a shop and using the Tagobo Potion on it freed the Tour Guide, and he provided his word. Only one missing islander remained, the Techo Master.

The note Jhuidah found directed Neopians to a Neohome on the island, which in turn provided the key to the mysterious letters appearing on Mystery Island's beaches. By travelling to Techo Mountain and using the code from the beach, a petrified Techo Master would appear. Neopians challenged the statue in martial arts, and succeeded in freeing him. With all five words now gathered, the race was on to reach the volcano and stop the seals being broken. The magic spell was:

Unfortunately, this only served to completely unlock the seal, and free the beast known as Moltenus. He promptly ate Eithne, seemingly killing the Faerie. Controlled by the evil shaman, Moltenus tried to attack anyone entering the volcano. Taking some last minute clues from the Island Mystic, a magic chant was devised to weaken the shaman:

This proved to be the shaman's weakness, and he promptly disappeared, releasing his control over Moltenus. With the danger over, Mystery Island was saved!

This was a puzzle plot, with users scouring the site for clues to help them save the island. Certain elements of the plot were time sensitive, for example Jhuidah freed herself from the Rock Pool if users did not provide a Tagobo Potion quickly enough - however this didn't affect overall plot performance.

The following prizes were awarded via neomail for quick completion:

After the plot, trophies were awarded based on speed of completion:

Avatars were also awarded based on speed of completion:

Awarded to users who freed Jhuidah from the fish bowl during the Volcano Mystery site event (before the plot progressed and she was able to free herself).

Awarded to the first 100 users to solve the Volcano Mystery.

Awarded to the first 10,000 users to solve the Volcano Mystery.