War for the Obelisk

The War for the Obelisk was an event that began on the 11th of February, 2013 (Year 15), and lasted until the 23rd of April, although participation ended on the 18th of March. It was a predominantly battling-based event, although there was a small digging element at the very beginning. At the conclusion of the original battle, on the 29th of April, an ongoing battle event was launched.

The event began with a mysterious earthquake rocking the outskirts of Tyrannia. In the aftermath, it appeared that a mysterious spire had been revealed. A digging team was dispatched by the Tyrannian Paleontological Association to excavate the structure ahead of a proper team of Archaelogists being dispatched to learn its secrets. The Zafara in charge of the digging effort hastily enlisted visitors to help with it, hoping to speed up the process. When the structure was revealed, it turned out to be an Obelisk of some sort, and the digging team hastily retreated. The site didn't stay quiet for long though.

An agent of the Thieves Guild had seen the light exploding on the horizon when the earthquake happened, and reported the information back to Kanrik on Terror Mountain. Knowing how dangerous long hidden artefacts could be, and sensing that the Obelisk could be dangerous, he sent out the word for the thieves to converge on Tyrannia. If nothing else, they would be able to sell the contents of the Obelisk on for profit.

The Krawk who had reported to Kanrik meanwhile was captured by a mysterious Lenny known only as the Duchess. She tortured the Krawk for information, eventually learning of the Obelisk. The Duchess, who prided herself on knowing everything, gathered together the secret organisation she headed - the Sway. They had been a clandestine league that had long influenced events in Neopia from behind the scenes. Deciding that anything out of control of the Sway was not a good thing, they set off for the Obelisk.

The Order of the Red Erisim, a clan of influencial and powerful mages, were the next to become involved - learning of the Obelisk through a crystal ball. The new leader of the Order, Rasala, sought to change the ways of the Order - believing that the magical power the Obelisk represented could only be effectively controlled by magic users, and shouldn't be left around for anyone to use. They set off for the Obelisk to claim it, and protect it from being misused.

With the Obelisk quickly becoming common knowledge, the next faction to become involved was the Brute Squad. They had been formed by Commander Flint in the aftermath of the fall of Faerieland. Believing that new evils would continue to rise in Neopia, Flint decided that pre-emptive strikes against such evils would mean fewer casualties in the long run. He dispatched the Brute Squad to Tyrannia, believing that the Obelisk could be a weapon they could use to protect Neopia in the future.

The group of scholars known as the Seekers were the next to learn of the Obelisk. Their leader, Professor Lambert, proposed that they attempt to claim the Obelisk, fearing that the knowledge of pre-history Neopia contained within the structure could be lost in all the fighting. They set off to the Obelisk in a large flying ship - and the five factions began to fight each other for the right to open the door.

But they weren't the only ones present. Undead twins were watching the conflict, and misunderstood it as a grand party. Feeling left out as they hadn't been invited, they sent out a calling card to members of the undead from all around the planet. Together they converged on Tyrannia as the Awakened, and joined the conflict believing that the Obelisk may contain cake. 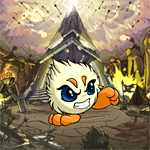 The six factions battled on for weeks, until the faction leaders themselves were forced to enter battle. The battle appeared to be drawing to a close, when something quite unexpected happened - the Obelisk called forth forces of it's own. These spirits set about attacking the already weakened factions, one spirit per faction. They appeared to be manifestations of the fears of the faction leaders themselves. Apathy appeared for the Seekers, tempting them to give up their knowledge seeking ways and become complacent. Death appeared for the Awakened, representing their fears for an end to their immortality and their party. Envy appeared for the Order, representing Rasala's fear that her desire to have as much magical power as others may turn her into someone like Xandra. Greed appeared for the Thieves Guild, representing Kanrik's fear that the Guild may return to the excesses and immorality of Galem Darkhand's day. Pride appeared for the Sway, representing the Duchess's fears that too much pride in her actions could lead her to forget the reason for them - the greater good of Neopia. Finally, Wrath appeared to face the Brute Squad, representing Flint's fears that they become a destructive influence in Neopia - the very thing they were formed to stop.

I bet you wanted to fight me!

The battle against the spirits was long and bitter, but eventually all factions managed to defeat them. In the aftermath, the surviving members all tried to gather themselves. The Sway emerged as the strongest remaining faction, and earned the right to open the Obelisk. Inside, they discovered the spirit known as the Oracle, who had summoned the fears to test them. The Oracle claimed to know much of Neopia's coming future, but refused to divulge it so quickly, opting instead to reward the Sway with 'boons'. A truce was established between the remaining factions, though it did not last long. The fighting began again, with factions facing off against each other in smaller groups, and continues to this day. The Oracle continues to award the winners of the battle with temporary boons.

The majority of the event was based around battling, however, a smaller digging event released before the Obelisk was uncovered, along with earthquake random events released around that time, contributed to final scores. There was an associated NC component with the digging stage.

Once the battling phase actually began, users were able to select one of the six factions to join. Challengers were released in waves, fighting challengers from the opposing factions of gradually increasing strength. Challengers awarded cask items that required NC to open. Users filled a 'Do Your Part' bar through winning, drawing, or losing against challengers in each wave. These Do Your Part bars formed a major part of final prize points.

The sixth, and final wave was slightly different, in being a community boss. Each faction faced a single opponent based around the fears of that faction. The boss started with high HP that gradually decreased. Once a boss was defeated by a single user, it would be locked out, disappearing from the battledome for all faction members. Anyone fighting the boss at that time could refresh to gain an instant win. A glitch on the first day of the wave's release wherein some bosses had easier ability sets resulted in Envy and Wrath being defeated early. They were given new ability sets and released back into the battledome for the weekend. Unlike previous rounds, only losses against the boss filled the Do Your Part bar.

After the conclusion of the war, a prize shop was released. In addition, the Sway faction, having won the war, were granted temporary 'boons' by the Oracle. Most of these centred around increasing payout around the site. Sway members also received an extra avatar and site theme. Instead of boons, the remaining five factions were awarded an item on the page - after the conclusion of the original war, a smaller version then began to play out regularly. This time, only three factions went up against each other. The items released in the prize shop were:

Trophies were also released to those who participated:

Everyone who participated was awarded the following avatar:

Awarded to users who participated in the War for the Obelisk.

In addition, they were rewarded with the Tyrannia: Mysterious Obelisk site theme. 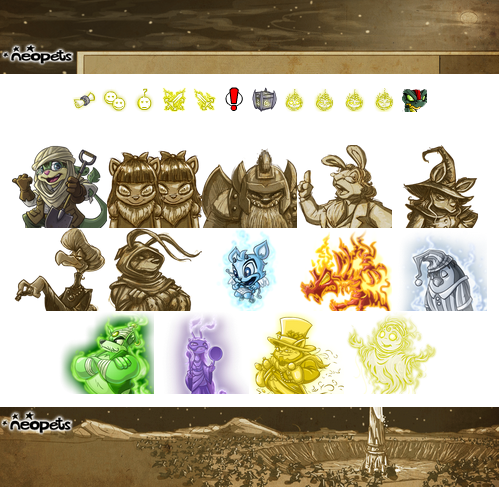