The original Key Quest went offline in September 2014 during the server transition after the JumpStart acquisition. It was officially retired in July 2018 when it was announced that it would return as a new mobile app for smartphones and tablets. (However, that remake has since been shelved.) This historical guide serves as a reference for the original version.

Key Quest was a flash game that launched on July 3rd, 2008 (in Premium beta—it was fully released on July 28th). It was a board game that pitted up to four Neopets users against each other in a competition to gather keys.

As part of the move to JumpStart's servers, key files needed to run Key Quest were lost. As a result, the game did not return when the transition was completed and was effectively removed on September 18th, 2014. It was finally announced at Comic-Con in July 2018 that Key Quest will return as a mobile app. However, in TNT Q&A's in both August and December 2019, it was confirmed that a Key Quest mobile remake had been shelved in order to focus on preparing the rest of Neopia for the end of Flash support.

Thanks to _Starryeyedsurprise_, ukases, and Blue_Star for some of the images in this section!

Key Quest, unlike most Neopets games which have users playing against computer controlled opponents, involved 2-4 players playing against each other. Each user could select a token to represent them in game, with many to chose from. Most came from real-life merchandise, such as plushies that resembled the tokens you would receive when claiming the Rare Item Code that came with the plushie. Other tokens were awarded from site events on occasion. 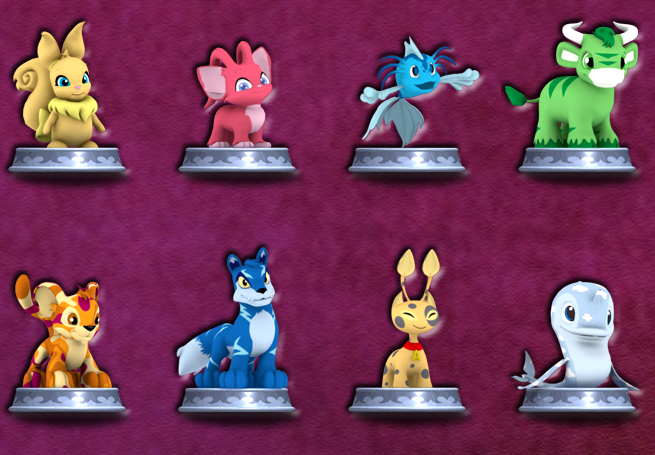 A selection of different tokens.

When all users had selected tokens, they were thrown into the game—a board game where players took turns to roll virtual dice to navigate around. The aim of the game was to collect four differently coloured keys scattered around the board and then make their way to the exit. The first player to do this would win the game. 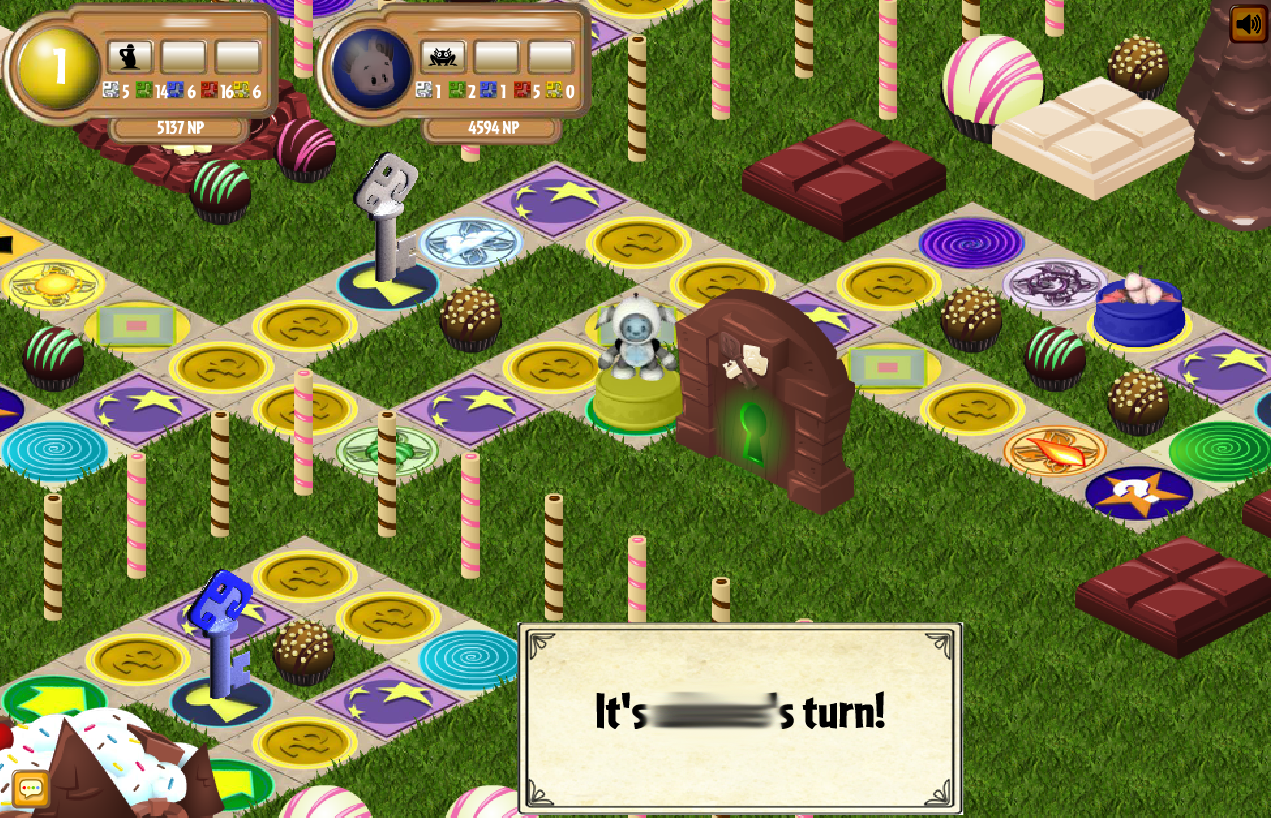 A view of the Key Quest board.

Complicating matters were the other tiles on the board. Several would launch mini-games, competitive games-within-games that had objectives like matching Nova pairs or cleaning a Meowclops. The player who scored highest in each mini-game would be able to select a free key, allowing them to gain an edge in the game. 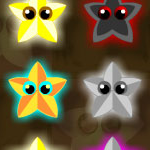 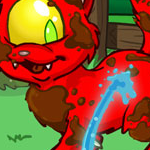 Two of the mini-games were called Nova Matcher and Petpet Pamper.

Other tiles awarded a random power up, cards that could be played at the beginning of a turn to a variety of effects. Some would give a boost to a player, while others would hinder their opponents.

The Misdirected Compass Power Up would change the direction an opposing player was facing.

There were also 'elemental' aligned tiles. Each token had an alignment based on the key Faerie elements of water, fire, light, dark, air, and earth. Landing on a tile with the same alignment as your token would award you with a positive boost, whereas landing on a tile of a different alignment would curse the player in several possible ways.

Finally, random events would periodically happen that could potentially be applied to all players in the game.

The Edna's Tower Random Event would award an extra 200 Neopoints to the player.

As the game went on, the base board was complimented with several different versions that added variety and took players to entirely different lands. 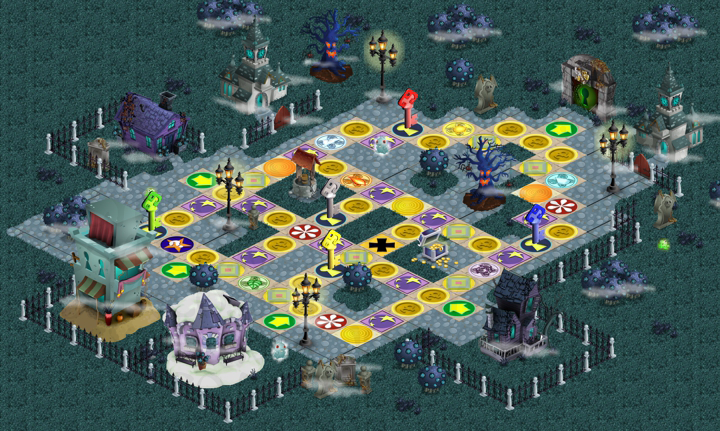 Players earned Neopoints as they played the game which were awarded upon conclusion. In addition, players were awarded with keys that varied in quality depending on finishing position and players present in the game. The four qualities of key were gold, silver, bronze, and lead. These were not items, but rather tokens that could be turned into the Key Quest Faerie, Bree. 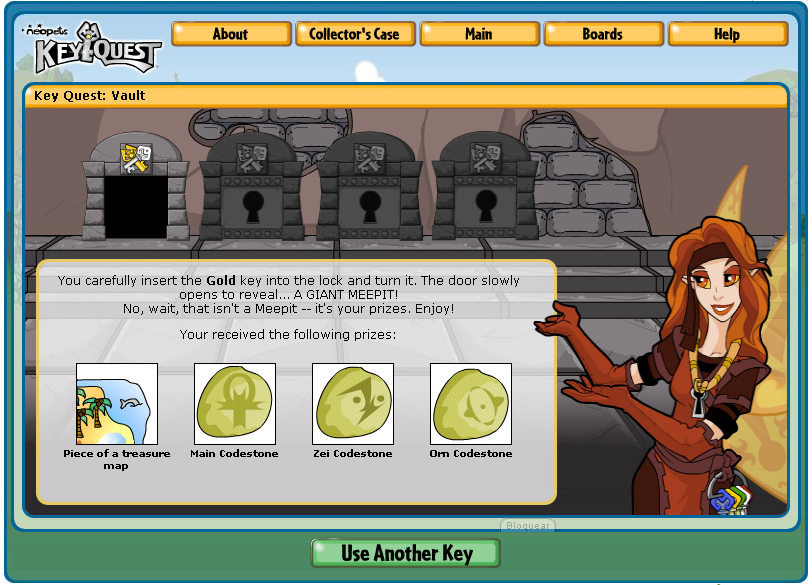 Some of the prizes awarded from the Vault.

Prizes varied in quality, with gold keys awarding some of the best. Up until 2012, TNT also periodically updated the prize pool to include seasonal items that would then rotate out. These were typically themed around holidays like Valentine's Day and Christmas.

Each game had three familiar tracks that players came rather familiar with. Below are the MP3 files for you to play at your leisure:

If you'd like to learn more about Key Quest, why not check out: