Neovision was a site contest that ran between April 28th, 2007 (in Premium beta—general release was on May 13th), and was officially removed on October 14th, 2009 (although the contest had not been judged for some time preceding that). It was a weekly spotlight that featured user made flash videos, along with short videos made by the Neopets Team themselves (several of these later aired on Nickelodeon television to advertise Neopets). Thanks to Jimmycarlos for some of the images in this section

Neovision was a weekly spotlight, so new videos were always posted. However, unlike most other contests, there wasn't a complete historical archive so you couldn't go back and view all winners. Eventually, videos would be removed from the interface and could no longer be viewed. 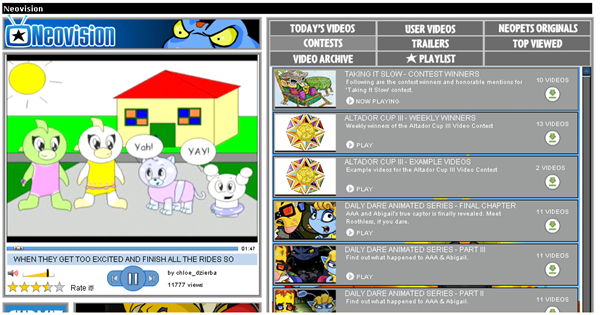 The exception to this were the shorts that the Neopets Team produced. These stayed up for the duration of the contest and were periodically added to.

Neovision had similar submission rules to the Neopian Times. Humans themselves could not appear on screen, and content had to be themed around Neopia to be age-appropriate. In addition, there could be nothing featured which Neopets did not own the rights to, so no branded objects - and all music used had to be either custom made or downloaded from the Neopets site. 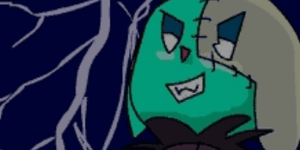 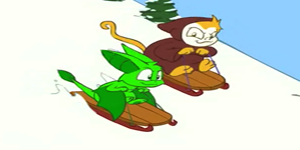 During the 2008 Daily Dare, the event was given more story than usual. Whilst text of the story was available on site, the Neopets team also produced video versions which were uploaded to Neovision over the course of the event.

In both 2007 and 2008 the Neopets Team announced special spotlights themed around Halloween and Chistmas. Additionally, the 2008 Altador Cup (V) included another themed spotlight. These were advertised as awarding special themed prizes and an exclusive trophy different to the regular Neovision trophy.

Prizes were advertised as being 10,000 Neopoints, a rare item (part of the same pool as other creative contests), and a trophy per Neovision win. Although it was normal for there to be a delay in the awarding of such prizes, Neovision was a special case. Prizes were not fully awarded until near the spotlight's closure. However, they were not awarded correctly. Those who had multiple wins were not credited as such, instead only credited with a single trophy and prize.

Despite what was advertised in the special spotlights, winners did not get any unique rewards, receiving the standard Neovision prize and trophy. The special trophy for Halloween and Christmas winners was uploaded, but not awarded.