Neopia is mostly a peaceful place, but no history of the world would be complete without some mention of the battles it's been through. Between Year Two and Year Fourteen, the Neopets Battledome invented by the site's original creators was host to some of Neopia's most memorable events and challenges, from devastating wars to community tournaments and hunts for coveted avatars. Let's take a Wocky Leap back in time and remember Neopets' original competitive fighting system...

The vision of a fighting game starring players' own Neopets was one of the earliest big promises made by the Neopets Team. Many of the oldest and most basic features of Neopets relate to battling in some way -- from quests that reward your pet with boosted stats to the double-edged sword that is the Lab Ray.

The Hunt for the Battledome plot in the autumn of Year Two helped build players' enthusiasm for what was sure to be a game like no other. At the same time, weird and wonderful characters across Neopia, both good and evil, began popping up at unexpected moments and announcing their plans to challenge Neopians to a battle! These were the first one-player challengers—computer-controlled famous faces willing to go up against your pet in a fight.

You think you can take me on?!

With alpha and beta testing completed, the Battledome officially took centre stage in Year Three, ready for brave and strategic owners to hurl their Neopets into battle. From now on, there was no stopping Neopia's Battledomers...

So what would a pre-Y14 Battledomer see when he or she first set foot (or paw) in the arena? 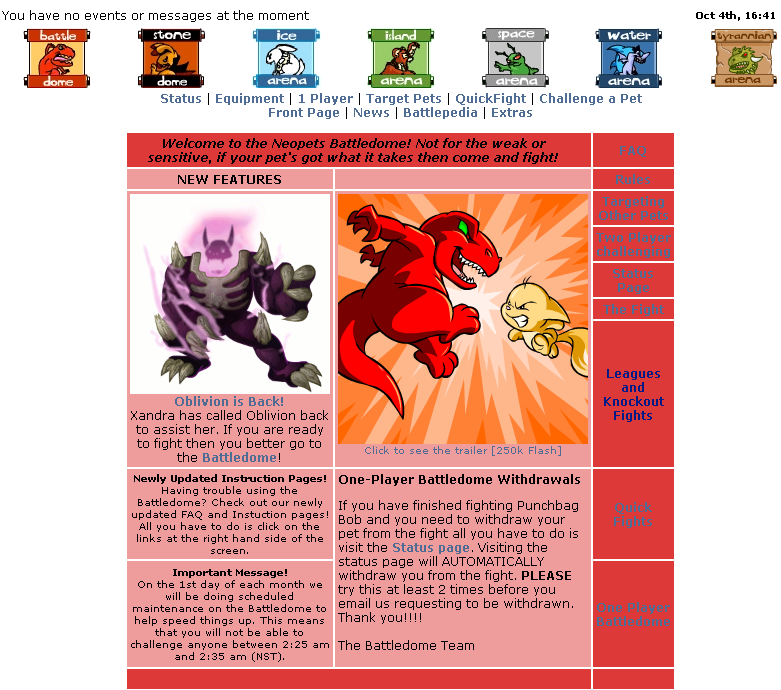 The homepage of the original Battledome looked fairly complicated, with links, messages and even its own news column. From here, players could select one- and two-player challenges or view their pets' stats, much as battlers can today.

One notable absence from the classic Battledome landing page was the ability to equip your Neopet. Weapons could be taken off your pet from within the Battledome, but to kit out your battler in the first place, you'd need to interact with your weapons and magic items from your inventory.

Whether fighting friends, villains, or the famous heroes of Neopia, the Battledome always looked much the same. Although Battledome arenas (such as the Ice and Stone Battledomes) appeared in almost every corner of the world, in practice they existed in name only—entering the Battledome from one of these exotic locations changed nothing except the background and text colour of certain message boxes. Every fight took place against the same plain white background, and it was up to you to fill in the cheering crowds and flashing lights with your imagination. 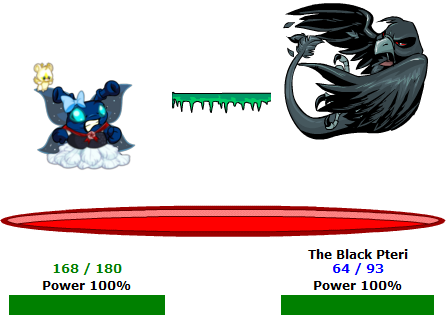 As in the current Battledome, players selected up to two weapons to use at a time. As well as Faerie-given abilities, though, it was also possible to choose from a range of talents exclusive to your pet's species, or to take a particular stance, which boosted either your attacking or defending power. If you were feeling particularly confident, you could dish out extra damage at your own risk with a Fierce Attack. If today didn't seem to be your day, you might prefer to opt to protect your pet, at the cost of some of his/her damage-dealing ability.

Strangely enough, despite all the time and money that went into training for the original Battledome, it provided very little by way of prizes. The Defenders of Neopia challenge series awarded trophies to players who could best Neopia's villains, and defeating certain challengers unlocked secret avatars, but Neopoint and item prizes were mostly unknown. On the other hand, defeating any one-player character—even Inflatable Balthazar—would instantly restore the winner to full Hit Points.

To keep one-player fights interesting, their difficulty was automatically adjusted according to your track record against them. Defeat a challenger, and your next fight with him or her would be a little more difficult; lose, and the next fight would go a little easier on you. This adjustment was unique to every user, so your hundreds of rounds against the Pant Devil wouldn't have any effect on your friend's first match with him.

The Dawn of A New Era

During Year 14, the Battledome was remodeled to a more modern version. The art was updated, and small battle animations added. The main differences added, however, were in the addition of prizes, changes to Faerie abilities, and a change from the HP increase system to a fixed, three tiered difficulty system. You can learn more about these changes below.

If you're still curious about the original (or current) Battledome, why not check out:

This page was written by Dream and last updated on December 23, 2018.