During its humble beginnings, many of the original Neopets were very crude and simple in design. As the site began to grow and change, TNT held several contests where users could vote on what the updated Neopets should look like. There were also contests to choose completely brand new Neopets, Petpets, and Paint Brushes!

Feel like taking a trip down memory lane? You can see what more of your favourite Neopets used to look like in our Old Pets and Scrapped Pets sections!

Before TNT began archiving updates to the site, a contest began where users could submit their own ideas for future Neopets. This contest ran for several months, with the winner chosen on April 18th, 2000. On April 28th, the Tigren was redrawn and added to the site. Many other pet ideas that were sent in were so liked by TNT that they were also redrawn and used: the Lupe, the Elephante, the Frogstomp, and the Zafara.

Almost immediately after being introduced, the Tigren was given a redesign with a vote on the new look. Tigren #4 was the eventual winner, with the updated look released on July 19th 2000. It was also at this point that the Tigren was renamed as the Acara.

The Tigren's previous design before the contest

During August 2000, the Usul was redesigned. The results were revealed on August 29th, with Usul 2 winning 26% of the overall vote. The new look Usul was officially released following this on August 31st.

The Usul's previous design before the contest

This contest was held on January 22nd, 2001 for both a new name and design for the Tatsu. All Neopians were given 150 NP for voting, and over 16,000 votes were tallied. The new pet was renamed to "Eyrie" when the results were posted on January 26th.

The Tatsu's previous design before the contest

This contest was held and judged on February 9th, 2001 for both a new name and design for the Fuzio. All Neopians were given 500 NP for voting, and over 30,000 votes were tallied. The designs for #3 and #5 were later used for the Carma and Noil Petpets. The new pet was renamed to "Kyrii" when the results were posted.

The Fuzio's previous design before the contest

This contest was held on February 16th, 2001. All Neopians were given 500 NP for voting. You can still view the original contest page. The winner was chosen on February 20th.

The Jetsam's previous design before the contest

This contest was held on February 28th, 2001. All Neopians were given 500 NP for voting. You can view the original contest page. The winner was chosen on March 1st.

The Mynci's previous design before the contest

This contest was held on November 2nd, 2001. All Neopians were given 500 NP for voting. The results were finally posted on November 29th. Since the votes were so close for #2 and #5, they were combined to create the final design. Vote tallies were never made public. You can view the original contest page.

The Gelert's previous design before the contest

Combination of the two winners

On May 15th, 2002 a contest was held to determine the next paint brush colour. Baby was declared the winner later that same day. Over 60,000 votes were tallied.

The day after the first contest ended, a second contest was held on May 16th, 2002. Pirate was declared the winner on May 21st.

This contest was held on August 4th, 2004 after Neopians were unhappy with the previous Kougra redesign on June 25th that same year. 125,175 votes were tallied. You can view the original contest page.

The Kougra's previous design before the contest

After seeing the popularity of some of the fake Neopets posted for April Fool's in 2005, TNT put up a poll to decide which of them would become the next Neopet. You can view the original contest page. #17, "Llamameeah", was renamed to "Gnorbu" and released on January 6th, 2006.

This contest was held on April 9th, 2011 to decide which Petpet Neopians wanted to see released next. #3 was declared the winner on the April 16th with 44% of the total votes, and was later named Belonthiss and released on May 10th. On June 2nd that same year, Petpet #1 was also released and named the Patamoose.

On February 5th, 2014, TNT released a poll to help them determine the new name for their upcoming mobile app along with a sneak preview of what it was going to look like. The winner of the poll was never announced after it closed on February 14th, and the app has not been mentioned since. You can view the original poll page with the demonstration video, but the choices have been removed.

The name choices were: 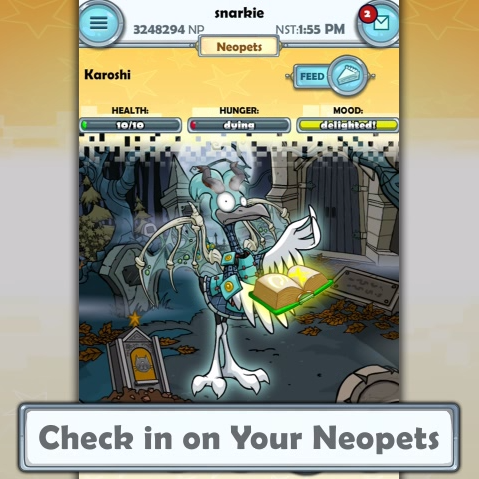 On January 17th, 2017, Elephante Day should have been celebrated with two new paint brush options. However, no new options were released, and instead, TNT posted a message indicating that new colour options would be coming via a poll shortly:

Today's not the day for any Elephantes out there to start feeling irr-elephante... or um irrelevant (yes, that's the word!). After all, we have a few never-before-seen paintbrush surprises coming their way in a few days' time - stay tuned!

And then on January 27th, they hinted again in the editorial of issue #766 that a poll was forthcoming:

Hello! So I noticed in the new features last week there was an update about Elephante day. And in it you said something about never-before-seen paintbrush surprises....does this refer simply to new Elephante colours, or something more exciting?? :O ~ debgorax
So, some pets are running out of colours for us to make! Therefore, we decided to roll out some new paint brushes. We did a couple test options to run by you guys to see what you thought for Elephantes!

And finally, on February 17th, a poll was released, with Neopians able to vote on one of the three following options:

On January 19th, 2018, a new poll was launched to decide which colours would be released in the following weeks. Users were given the chance to vote on four options. On January 27th, the results were announced:

Following the results, Steampunk, Toy, and Origami were all released as new colours. Burlap Doll was eventually also released the following year.

On February 6th, 2019, a new poll was launched to decide between two versions of the Royal Boy Aisha, one similar to the existing customisable version, and another similar to the pre-conversion pose. On February 13th, the results were announced:

During the voting, TNT staff member Scrappy posted to clarify what the poll was about (parts of the page incorrectly implied it was about a new paintbrush):

Hi friends! Scrappy here, I want to clear up a bit of your confusion.

This was a question of which of these styles/poses you guys prefer that will guide us in upcoming projects outside of the site. Our main goal was to see how you guys responded to somewhat non conventional poses for Neopets.

It is currently unclear what projects she was meaning.

On February 26th, 2019, a new poll was launched to decide which colours would be released in the following weeks. Users were given the chance to vote on four options. On March 6th, the results were announced:

Following the results, Oil Painting (as Oil Paint) and Mosaic were released as new colours.

This page was written by JN Staff and last updated on September 3, 2021.