On August 29, 2002, a new game showed up on Meri Acres Farm called Tower of Turnips. The premise of the game, like many of the other farm games, was quite simple: stack turnips to create a tower as tall, and as valuable, as you could! 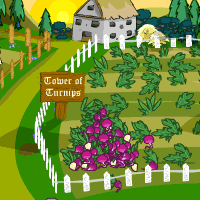 Unfortunately, less than a year later on May 31, 2003, the game was taken offline due to an exploit that was being taken advantage of:

There was a big exploit with Tower of Turnips earlier today that meant people could get pretty much infinite Neopoints. Doh! We have removed the game from the site as it was flawed, and the people who exploited the bug have been frozen (as you shouldnt exploit bugs, it's rude).

Oh and all the people who self-froze accounts with NP in hoping to have them unfrozen later on... clever idea, but no, sorry, that's not happening :)

The exploit was bad enough that a fixed version was never re-released, having only a shortlived 276 days in Neopia.

However, thanks to some sleuthing and nostalgic memories, we have re-created a version of the game for you to play yourself below!

The goal of the game is to build a tower that scores you the most points! Stacking turnips is easy. Simply select which row you would like to add a turnip to and click on "Stack Turnip" to add it. These are also special turnips that defy the basic laws of physics. You need not always have a strong foundation on row 1!

Don't get too overzealous, though. Towers of turnips are prone to falling over.

YOUR TOWER IS WORTH 0 NP

And in the process, you built a tower of turnips that would have been worthy of 0 NP! If only you were really in Meridell.

Oh no! It collapsed!

I guess stacking turnips isn't exactly your forte. If you hadn't been so overzealous, your tower would have been worth 0 NP!

This page was written by Dave and last updated on December 23, 2018.