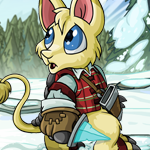 Darling, it's better down where it's wetter...

InsaneSlothMinion is very sad.
You should give it WORLD DOMINATION. Or a kitty treat.

This page was written by noileh and last updated on March 3, 2021.