Altador is a long hidden city of heroes, with a rich history brimming over with legends. It is also home to perhaps the most popular sport in all of Neopia: Yooyuball! It was discovered by the public in Year 8 on the 1st Day of Running, though it had been known about at the conclusion of Year 7 to a certain collection of heroes. 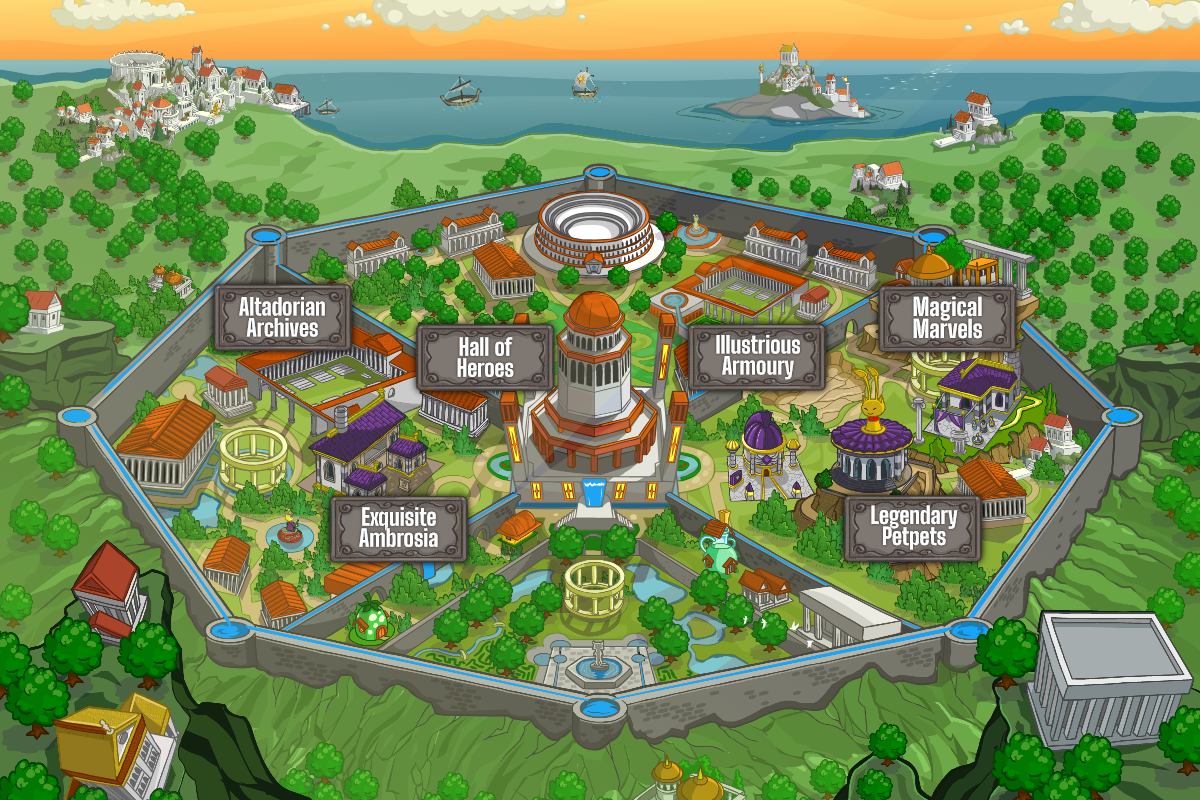 The city itself is a large walled structure with an aqueduct running atop the perimeter. The city's water processing plant is held within the walls, and due to an unfortunate design fault, can flood the city if operated incorrectly. The city itself is separated into four districts by the aqueduct system. All four districts sit around the Hall of Heroes, the council chambers in which official matters are discussed. Far below the Hall of Heroes is Heroes Rest, a place from which Jerdana is able to cast great magic. The torches in the council chambers are lit by magic.

The Arena District lies in the west, containing the Colosseum used for the Altador Cup tournaments and Punch Club meetings. During the Altador Cup's off season, it is also used for battling and Alabriss Chariot Racing.

The Park District lies in the east, and is home to a great many gardens, and a small Neggery. Along the outer city wall of this district is the Hall of Fountains, which few but the locals know about. The exact purpose of the Hall is unknown, but it is frequented by secretive robed figures and has access to the city's sewer system.

The Money District lies in the south, and is home to the Altadorian Archives. Near the outer wall of this district is a hidden area known as Gardener's Rest, where those who enjoy horticulture can relax.

The north houses the Bazaar District, and a great many shops can be found there. One of the aqueduct towers in the city wall of this district houses a location called the Dicing Tower. Off duty guards spend time relaxing there.

Altador is home to a rock quarry in the east, just outside of the city walls. Here, perfectly flat rocks are produced, and shipped all over the planet. On the mountainside, above the quarry, lies the Restive Tomb. The exact purpose of this structure is unknown, but it currently holds a mummified gelatinous non-cube.

An example of the flat rocks from the Altador Quarry.

To the south of the city proper, a large dock has been built up, which looks from a distance as if it is a city in its own right. Ships from all over Neopia dock here. Marak, one of the council members, lives just offshore of this port, along with his tribe of Peophins. The Isle of Yooyu, a form of nature preserve for Yooyus, also lies just off the coast. There is also a hidden cove that was discovered by Jerdana.

Between the Docks and the city walls is a large expanse of farmland. Florin, one of the city's guardians, encourages locals to grow their own produce. One of the most successful farms in this area is the Old Follies Farm. There is at least one field of red flowers that turned gold when the city was released from the Darkest Faerie's curse.

Altador lies on the west coast of the main continent of Neopia, just south of the Shenkuu mountain range, and west of the Lost Desert. Whilst the main city is a very built up area, the council have managed to keep a lot of greenery within the walls. Outside of them, lush farmlands wait, and there are a few mountains nearby. Small amounts of the orchid species Selerium Taniverens grow near the city. On the shoreline, a set of cliffs rose from the ocean when the city was released from a time bubble.

Here's how Altador has changed over the years. Click on the thumbnails to view larger snapshots.

The weather in Altador is almost always sunny and pleasant. This is largely thanks to the magical enchantments of the Faerie guardians, Siyana and Psellia. The Light and Air Faeries work in tandem to maintain a perfect climate for their city.

King Altador is the current named ruler of the city, and has been since it was built when he was elected to the position after the citizens voted on who should lead them. However, this is only in title. In reality, the council of 11 (formerly 12) heroes whom King Altador brought together jointly rule the city, each bringing their own particular skills.

Altador was formed as the goal for King Altador from an early age. He was born to a family of refugees in an area known as Schrommos, and sought to build a safe haven away from corrupt and unjust leaders. He traveled the land, and gathered at his side 11 other like minded heroes. Together, and with the help of countless homeless wanderers, they built the city. The Altadorian Empire came to cover much of the land that was once known as Schrommos. Upon founding the city, the 12 council members each made a sacred oath to rule with fairness and justice, along with taking a sacremental drink from a goblet.

However, over time the Darkest Faerie began to desire complete control of the city. She launched a plan to take over, but was narrowly thwarted by the Faerie Queen, Fyora, with help from Jerdana. The Darkest Faerie was turned to stone, and cast to the bottom of the ocean. However, it came at a terrible price. Altador itself was trapped within a time bubble, and disappeared off the face of Neopia, destined to sleep for as long as the Darkest Faerie.

1000 years passed until Year 7, and the Darkest Faerie was able to overcome her magical imprisonment. She returned to Neopia, and set about taking over Meridell, with an aim to recover Fyora's Wand, which she suspected to be buried there. Next, she launched an assault on Faerieland itself, and fought with Fyora. In a desperate attempt to seek help, Fyora created a portal to Altador for two young Neopets, Tor and Roberta.

The duo found themselves in Altador, and gathered together the remaining 11 heroes. Jerdana equipped them with a magical amulet, and sent them back to Faerieland to face the Darkest Faerie. Meanwhile, Jerdana feared that the two heroes would fail, and readied a plan to counter the Darkest Faerie should she attack Altador. She began to magically erase the memories and history books of everyone and everything in Altador, so that the Darkest Faerie could not bewitch them into believing she was the true ruler.

Meanwhile, Tor and Roberta succeeded in using the magical amulet, and the Darkest Faerie was turned to stone for another 1000 years, with Fyora keeping her in the palace gardens. With the threat gone, Altador was released from the time bubble. However, Jerdana's magic was still in effect in Altador, and for a while the entire country suffered amnesia. Thanks to the efforts of the librarian, Finneus, the spell was eventually broken a few months later in Year 8.

With peace restored, King Altador reinstated the Altador Cup in Year 8, and this has become a very popular annual contest. An annual beauty contest to crown Miss Altador is also held during the Cup.

Altador is a very rich city, with Gordos being one of the finest treasurers on the planet. The Altador Cup is without a doubt the major source of income for the city, though a considerable amount of trading also plays a part. The tickets to the Cup itself are free, but a substantial amount can be spent on team merchandise.

Altador tends to produce Greek and Roman inspired dishes. Olives and figs can often be found on menus, such as this selection.

Slushies are a popular drink during the Altador Cup period each year.

A large army is present in Altador, the remnants of the one Torakor once led before joining King Altador. This army is only ever for defence though, as both King Altador and Torakor have sworn against oppression of neighbouring lands.

Upon being knighted by King Altador, warriors are presented with a set of gold plated armour.

A number of Petpets are native to Altador, most of which can be picked up at the Legendary Petpets shop. Perhaps the most famous Petpet species in Altador is the Yooyu - the basis of the Altador Cup and used as messengers by the King. They have their own nature reserve just off the coast of the city. Alabriss are also used for chariot racing in the city. Altador is also one of the known habitats of the Gelatinous Non-Cube.

A unique species of bird with golden feathers known as the Sefira roosted in Altador every winter until the Darkest Faerie's spell, at which point they disappeared.

Traditional dress in Altador is similar to those of Ancient Greece and Rome. Citizens wear garments of a single piece of fabric folded into different shapes and held in position using pins and belts.

Altador has developed a number of ways of telling the social class of a person from a distance. Those with gold lace on the edges of their clothes are considered well off. Those living in the farmlands use the length of their skirts to denote both gender and occupation. Nobles use the size and shape of belts they wear to illustrate their age, changing in style when a child reaches adulthood.

In city wide celebrations, warriors and their families typically wear golden crowns, while city officials wear jewelled necklaces of colours to denote the manner of their service. Women typically wear beaded headresses to represent the city's unity and oneness. Modelled after one originally made for Florin, citizens recognised for acts of benevolence now wear wreaths in their hair. Every year, the city marks the anniversary of the Darkest Faerie's betrayal with a day of remembrance where citizens wear black.

Shields granted to warriors are often kept as family heirlooms, and those who have one of the originals from thousands of years ago consider it a great mark of honour.

Farmers consider falling water to be good luck, and often artificially work such features into their fields.

If it's your first visit to Altador, then there's certainly a lot to do. Finneus might need your help with something. Even if you're a regular visitor, why not check out:

This page was written by Herdy and last updated on December 19, 2019.