Brightvale is a country dedicated to learning and art forms of all types, largely based upon medieval England. Whilst a great deal smaller than its neighbour, Meridell, there is still a lot to see if you have the time. It was discovered in Year 6 on the 11th Day of Hiding, which is celebrated annually as Brightvale Day. 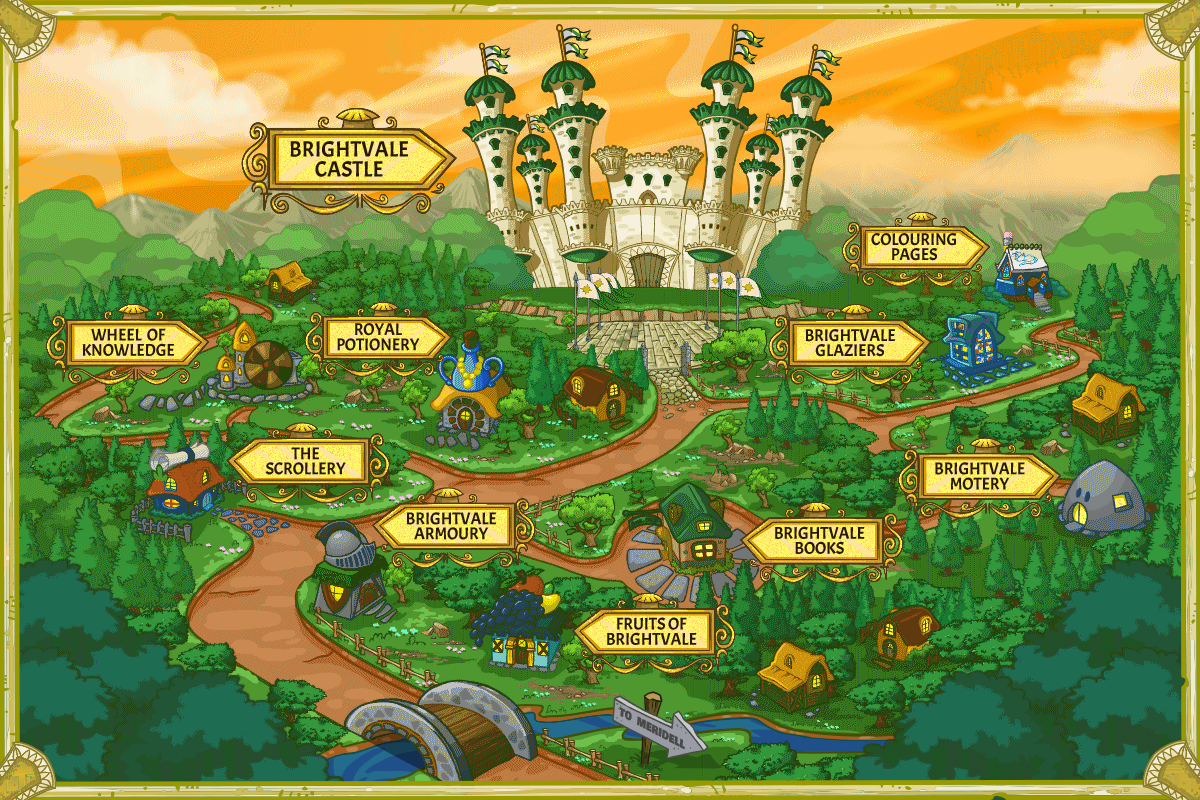 This stunning piece of architecture lies at the very heart of the country. The many spires house countless libraries and research rooms for use of scholars, both native and visiting. The only known named library within the castle is the Finneus J. Scrollbottom Auxiliary Surplus Archive. This version of Brightvale Castle was commissioned by King Hagan himself, though it is unknown if there was a similar building on the site before work began.

This small town surrounds the castle of Brightvale, and like the castle, contains many buildings devoted to learning. Like many towns that build themselves around a castle, it is dedicated mostly to trade, though Brightvale maintains a more relaxed atmosphere than the bazaars of their Meridell neighbours. There are many mansions in the area, such as Haverbrook Manor. Brightvale has one of only two known universities in Neopia - in Year 18, they held the 1st Annual Conference on Robotics and Automation in the Month of Sleeping. Known street names include Learned Street, Hagan Row, The Knowledge Highway, Scholarly Crescent, Knowitall Road, Potionery Avenue, Education Lane, and Mote Row.

On the far reaches of the Brightvale borders is the swamp of Bogshot. It is home to a village of poor people afflicted by an illness known as the Squamata Plague that only a combination of White, Red, and Black Bogberries can cure. There's just one problem. One of the Darkest Faerie's old minions who was exiled to the swamps, known as Kastraliss, guards the only known source of the Black Bogberries. If that wasn't enough, there are also many sink holes in the swamp that locals can fall into. Ruins in the swamp suggest there was a settlement there before the climate changed.

Just what the doctor ordered!

This once jolly trading town on a small island off the Brightvale coast had a dark cloud cast over it with the arrival of the Darkest Knight. The Knight was exiled from Meridell castle, and built a Keep near the town to control the people. They rebelled against him and killed him, though at a later date the Darkest Faerie brought him back from the grave to terrorise the people once more. Market Town has a sizable Traders Guild which run the town. Guildsman Marl serves as the town's defacto Mayor.

Most of Brightvale is grassy and fertile, with some forested areas. It is situated on the same peninsula as Meridell, but fifty miles further inland. The far west of the country borders an area of the Haunted Woods known as the Werelupe Woods. Whilst there are some farms in Brightvale, there are not nearly as many as in neighbouring Meridell, and the country as a whole is a lot smaller.

Here's how Brightvale has changed over the years. Click on the thumbnails to view larger snapshots.

The climate in Brightvale is quite warm and pleasant, though with enough rainfall to sustain greenery.

The current ruler is King Hagan, brother of King Skarl I of Meridell. Brightvale existed as a kingdom before King Hagan came to the throne, but given that Skarl inherited the Meridell throne, it is unclear how Hagan came to be King of Brightvale. Hagan is not thought to have any children, though he does have a niece, Princess Roberta. Again, it is unknown exactly who she is the daughter of, as King Skarl is also not thought to have any children. Should King Hagan die, it is likely either Princess Roberta or King Skarl would inherit the throne. Hagan is thought to be a fair and just ruler, but sometimes he can be heavy handed, such as banning his country's team from the Altador Cup because they had not been reading enough. Sir Kaherdin's family are thought to have as much claim to the Brightvale throne as Hagan.

There appears to be a unique academic law system within Brightvale, known as the Court of Knowledge. The King himself can bring charges against people there, but it is unknown if others can, and the King acts as judge in the Court. The Court, however, is dreaded by locals. Known charges that can be brought before the Court include 'insensitive handling of sensitive research' and 'prolonged studies with poor results'. These are not criminal charges in the normal sense. King Hagan reviews methodology and results, and passes judgement accordingly. There are Committees that oversee some branches of the Court's processes, such as the Committee Against the Misuse of Educational Resources. The Committees help King Hagan come to a judgement.

Very little is known about the history of Brightvale., but it is a very old location. It existed at least a millennium ago when Altador disappeared. It was presumably destroyed along with Meridell in the original timeline of Neopia, but then saved when Lisha and her friends altered history to stop the war with the Darigan Citadel in Years 4 and 6.

Brightvale was thankfully one of the few areas that did not fall directly under the control of the Darkest Faerie when she returned to Neopia in Year 7.

Brightvale deals in knowledge as a commodity. Books are thought to be this nation's primary export. The town houses the Brightvale Institute of Technology, Engineering, Mathematics and Economics. This institute educates many people, and has helped out in quite a few Lenny Conundrums. The Brightvale University is also the premier educational institute in the area. Tutition fees are paid in full by the crown. Due to the learned nature of the citizens, a great deal of them also practice varying degrees of magic, and as a result Brightvale also specialises in Motes and, to a lesser extent, magical potions. The Brightvale people also have a considerable love of stained glass windows, with a sizable Glazier in prominent position in Brightvale Town.

Brightvale is thought to import a great deal of its foodstuffs, though indigenous berries and fruits are a delicacy to some.

Brightvale relies heavily on diplomats to keep it safe. King Hagan believes in fighting only as a last resort. As a result, Brightvale's standing army is quite small, and mostly focused around the castle. Despite their size, the Brightvale army is known to be exceptionally good at archery. If diplomacy fails and it comes down to actual fighting, Brightvale heavily relies on neighbouring Meridell for support.

Many of Brightvale's shops offer a wide array of produce for visiting tourists, though there are other sights on offer such as:

This page was written by Herdy and last updated on August 11, 2022.