Dacardia is an island to the west of Altador that, until recently, was only known about by a select few Neopians. It began to see more widespread recognition after an abnormal storm in Year 22.

This area on the south of the island was once the tourist hub of Dacardia, drawing the select few Neopians who knew about the island to its golden beaches and restaurants. It was mostly destroyed in Year 22 by a strange storm aside from a very sturdily built farm. 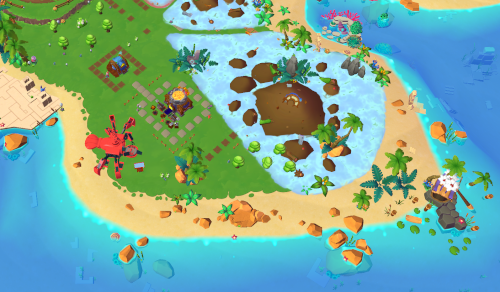 To the northwest of the Peninsula is the Mystic Jungle, perhaps the oldest settlement on Dacardia. Deep in the Jungle is Mystic Village, a largely self-governing village that was once a hub of activity on the island. The Hissi Waterfall Statue, a large monument built in honour of the village's first elder, can be found near the village's City Square area. 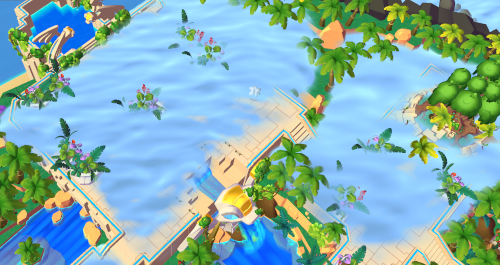 The Plateau lies to the east of the Peninsula, and has large deposits of Dacardite, the mineral which powers much of Dacardia. An ancient monument of the Gnorbu Sage dominates the area, along with wildlife preservation areas. During the events of the storm, a meteor and space ship crash landed in this area.

Dacardia is an island off the coast of a large island chain that sits off the western coast of Altador. It has a varied topography, from lush fields and jungles to rocky plateaus and a volcanic area. A major river runs through the Mystic Jungle area and there is at least one large mountain on the island. Below the island, there is a cave network containing large deposits of the Dacardite crystal mineral. 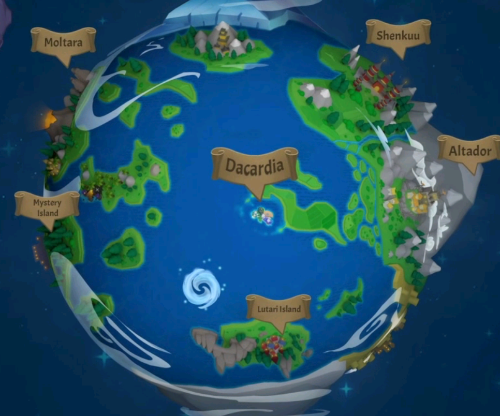 The climate of Dacardia is generally very clement. The storm which largely destroyed the island was considered a strange occurence, even before it was established to be artificial in nature.

The Neopian Times has described Dacardia as a province, though it is unclear exactly where it is a province of, or if this was a colloquial term for the island's previous unknown nature. The Mystic Village elects their own Elder, the current one being Chief Honcho. It is unknown if Chief Honcho speaks for the entire island, or only the jungle area.

Dacardia seems to have existed for a very long time, with aged monuments to some of the early island inhabitants in the form of the Hissi Waterfall Statue and the Gnorbu Sage Statue. Recently, Lady Frostbite escaped the Defenders of Neopia and came to Dacardia to hide out. Soon after, an extremely strong and unnatural storm hit the area.

At the same time, a meteor was drawn down to the island and Officer Zerix's ship along with it. The storm had the effect of demolishing the vast majority of the island's structures, leaving the citizens homeless.

In the aftermath, famous builder Lania Cragg came to Dacardia to begin the effort to rebuild the island. An advert for a new Town Planner was launched in the Neopian Times, and when it was answered construction began. At the same time, Neopian Times reporter Skippi Snips was sent to the island by her editor to uncover the truth about the storm.

Although initially believing Lady Frostbite to have been the culprit, Skippi soon discovered she was not, and also found evidence implicating Captain Scarblade. Meanwhile, the local scientist Ariel helped Zerix prevent a build up in pressure on the Crystal Plateau that would have destroyed the island for good.

Due to the isolated nature of Dacardia, it has enjoyed until recently a largely self-contained economy. It is only recently following the storm that Dacardia has fully opened its borders to Neopia at large. An interesting side effect of this is that the Dacardian economy has evolved without the use of the Neopoint. Dacardians use a bartering system of trading items for different items instead, but often use Pearly Neggs as a stand in currency when needed.

Another interesting note about Dacardia is the presence of a huge deposit of the crystal mineral Dacardite beneath the island. This crystal is largely unique to the island, and although it has the potential to be highly explosive, it can also be used to freely generate clean electricity. This means Dacardians largely do not have economic concerns surrounding a power supply. A Giant gem of Dacardite in the Mystic Jungle powers the entire area.

Prior to the storm, Dacardia was known by its few visitors as home to some of the planet's finest restaurants and chefs. Much of this has been lost in the destruction, but Dacardia still retains a wildly varied ingredient base. Omelettes are a favourite of citizens, in many varied types. An ancient Negg tree provides sustainence for most of the Mystic Village and a fair few besides. There is also a sizable fishing industry.

Deep in the Mystic Jungle there is an exposed underground lake, or cenote. This is home to a wide variety of squids and sea urchins. Fish of varying sizes also live off the coast. As a result of the meteor crash on the Crystal Plateau, an invasive species of winged bug has also taken root.

Natural Fauna exposed to Dacardite deposits in Dacardia are known to become more hardy than elsewhere in Neopia. Squids, for example, can survive out of water for a substantial period of time.

Dacardia is a peaceful resort island, and does not appear to have any significant military capabilities. Its isolated nature in Neopia may mean it has never needed to develop one.

Dacardia hosts a yearly festival every Month of Celebrating to mark the Day of Giving celebrated elsewhere in Neopia, but the exact theme of this festival varies year to year.

This page was written by Herdy and last updated on December 13, 2021.