The Darigan Citadel is a mobile fortress originating from lands unknown. Currently positioned above Meridell, it is a decidedly gothic affair. It was discovered during Year 4, on the 20th day of Storing. 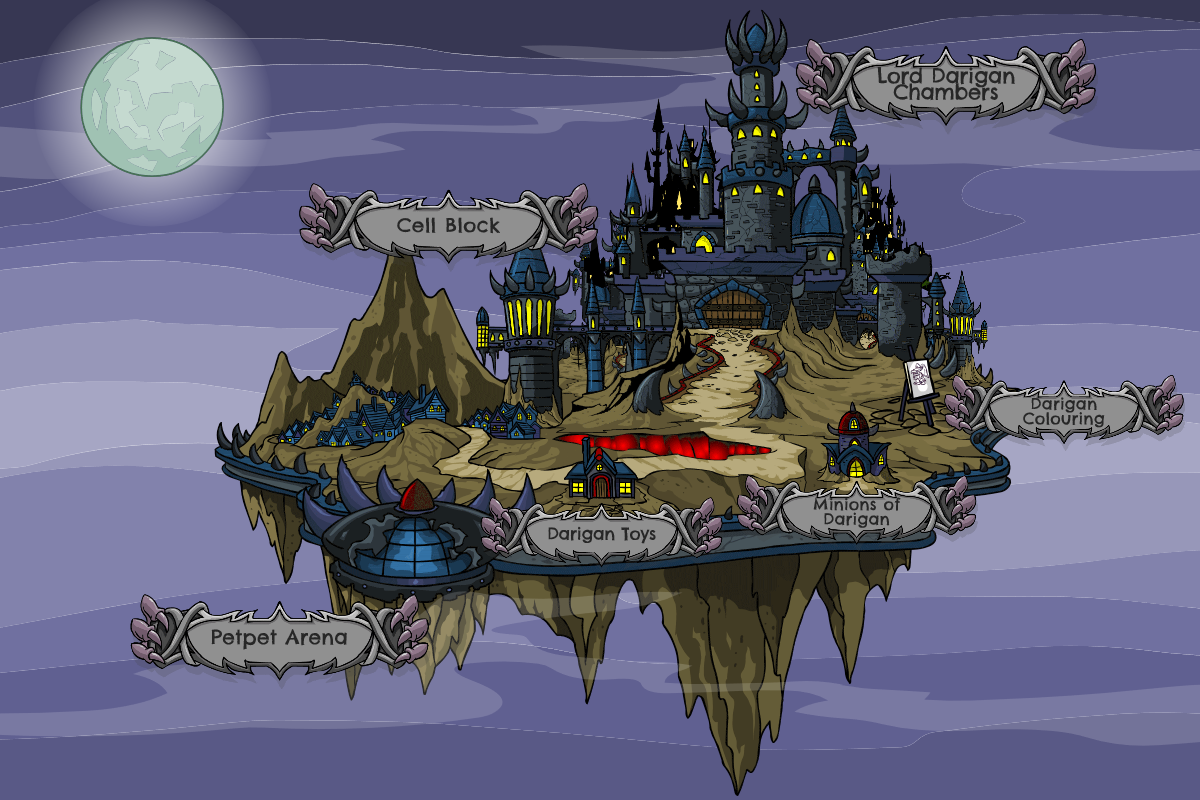 The Citadel is the only land in this area, though it is a vast fortress housing both a considerable castle and a town within the walls. There are substantial dungeons within the castle walls, and below them a vast network of catacombs stretches out underneath the entire town. Known street names include Kass Street, Minion Lane, Lord Darigan's Landing, Cell Block Row, Dungeon Drive, Arena Avenue, Darigan Drive, Long Fall Canyon, Desolate Circle, Lava Pit Way, Moonlit Path, Pitfall Path, and Drackonack Ridge.

The entire fortress floats high above the lands of Meridell, and has the capability to move. Due to being separated from the ground, and also due to the after effects of a terrible curse, most of the land is infertile and barren.

A view of the Citadel from a distance.

Here's how Darigan Citadel has changed over the years. Click on the thumbnails to view larger snapshots.

In contrast to the sunny lands of Meridell below, the Citadel sits in almost constant gloom. It is nearly always dark, and even when it isn't, the sky tends to be overcast.

The current and first ruler of the Citadel is Lord Darigan, after whom it is named. When the Citadel briefly came under the control of Lord Kass, he attempted to rename it as the Kass Citadel. Lord Darigan is not known to have any children, and as was shown after his defeat, a high ranking member of the army takes his place should he die. The only other known General in the Citadel besides Kass is General Galgarroth. However, in order to take power, Kass needed to either buy the loyalty of or eliminate General Galgarroth, Master Vex, a Sheriff, a Constable, a Mayor, a Captain, and two Chairmen. This may suggest that there is some sort of council in effect.

The lands of Darigan were the original holders of the magical orb that was at the heart of the first Meridell-Darigan war. During the period that Darigan held the orb, the lands were rich and fertile, and the people looked relatively normal. However, when the orb was stolen by King Skarl's Knights, a terrible curse came over the land. Lord Darigan vowed revenge on the Knights and, by unknown means, lifted the entire fortress into the air.

As he searched for Meridell, Lord Darigan gradually fell under the control of the entities known as The Three. They manipulated him into a violent war with Meridell, and he almost destroyed the Kingdom. Several key members of his army turned against him at the last moment though, and Lord Darigan was thought dead.

General Kass took over control of the Citadel, and like his predecessor, was tempted by The Three. It wasn't long before Kass began a second war against Meridell, with far deadlier results. In the original timeline of Neopia, he succeeded in crushing Meridell completely.

Thankfully, a group of time traveling schoolchildren managed to rewrite history in Year 4 and King Skarl's forces made a surprising comeback in Year 6, aided by a resurrected Lord Darigan. The two Lords of the Citadel fought, with Darigan gaining the upper hand. For his failure, The Three vaporised Kass on the spot.

Lord Darigan returned to the throne of the Citadel, and declared a truce with Meridell that still holds to this day.

Much like Meridell below, poverty is the norm in the Citadel. The lack of substantial farmlands makes life even harder. One of the few successful businesses in the fortress is a toy shop.

Again, much like Meridell, simple food is almost always on the menu. The cursed gardens of the Citadel offer few berries, so luxuries must be imported up from the farmlands below.

The Darigan Citadel boasts a large army, one rivaling Meridell in terms of size and skill. Unlike Meridell, the Citadel is quick to embrace magical weapons. Witches are frequently deployed to immobilise enemies, nova storms rain down from the skies, and local villagers can be hexed into joining the Citadel forces.

Should you wish to explore the Citadel, there are a couple of noteworthy locations to look at: