In a crater just to the east of the Haunted Woods lies the magical Faerieland, home to Faeries of all elements. Previously, the entire land floated 10,000 feet above Neopia on clouds and enchanted rock. The exact moment of its discovery is unknown, but it is thought that it was at some point in Year 1. 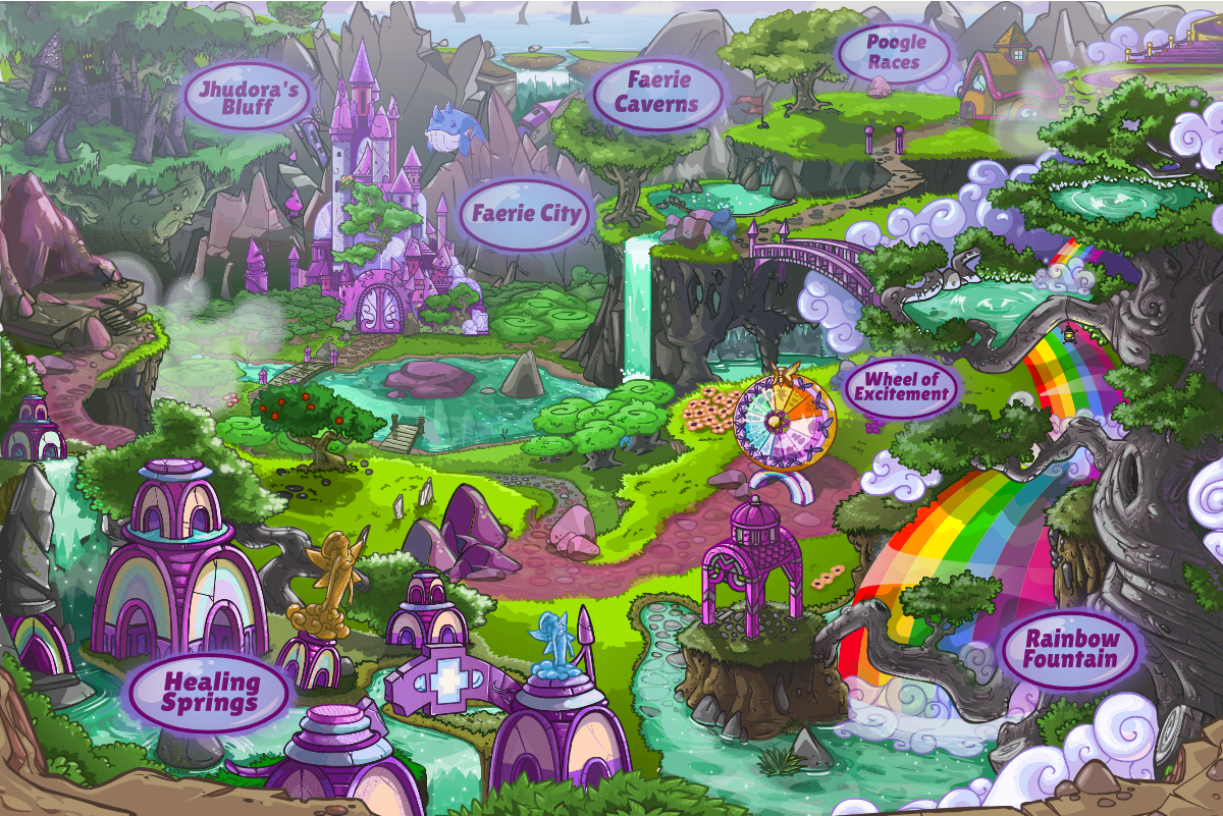 At the heart of Faerieland is Faerie City, a maze of purple and pink buildings with cobble stone streets. Perhaps it was due to this lovely colour scheme that Faerieland won the first annual 'Neopies' award for being the most desirable place to live in Neopia. The Faerie Queen's Castle can be found in the city too, along with cloud mazes and the Queen's personal gardens (which once contained the statue of the Darkest Faerie). 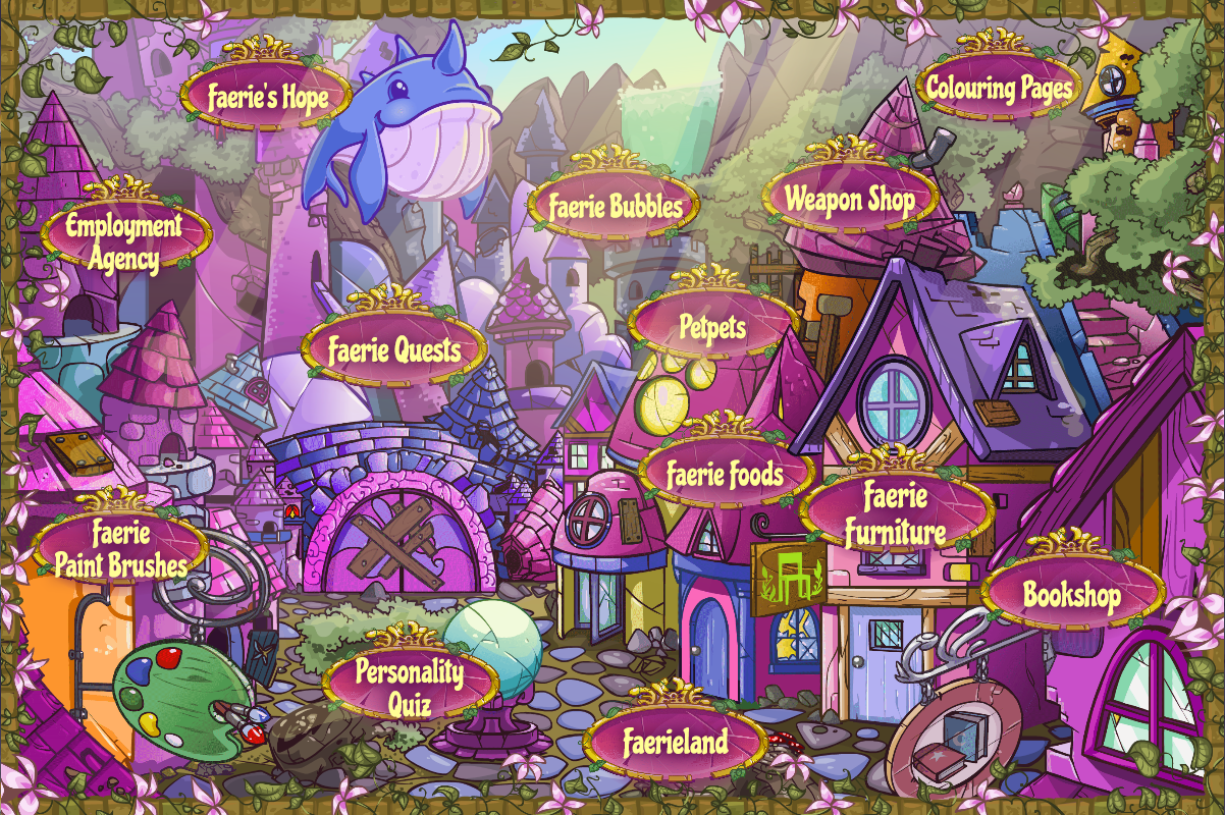 There appears to be some form of housing mandate in Faerie City, presumably from the Queen, that insists buildings are either pink or purple.

A surviving part of the original floating Faerieland was located in Year 24. A Faerie who had been in stasis on the land mass assumed the role of mayor of the new town and began to rebuild and expand the area.

Faerieland was originally positioned 10,000 feet above sea level. Whilst it normally floated south east of Neopia Central, it could in fact move with the wind, so could often be difficult to find. The entire city sat on a giant enchanted cloud, kept stable using Faerie magic. Pink rock structures jutted out from the cloud in places, forming small mountains, many of which had caves. Faerie City was built atop one such rock formation, sitting slightly above the cloud line in the centre of Faerieland. Jhudora's Cloud possessed a similar layout, but used more purple rock than the pink of Faerieland. Following the events of the Faeries' Ruin plot, Faerieland fell to Neopia and made a crater on the coast east of the Haunted Woods. The kingdom has been rebuilt at sea level, and now contains much more greenery.

Here's how Faerieland has changed over the years. Click on the thumbnails to view larger snapshots.

The weather in Faerieland is warm and sunny all year round. There used to be little rainfall, due to the city being positioned above normal cloud cover. Jhudora's Cloud had some magically created thunderstorms around the peaks.

The ruler of the Faeries is Queen Fyora. It is said she has been in charge for as long as anyone can remember. It is unknown who the throne would pass to in the event of her death.

It is unclear when the Faeries arrived in Neopia, but they were not there in the beginning. When they did arrive, the elements fought amongst themselves for many years. Queen Fyora ascended to the throne, and managed to unite all of the elements in peace. Faerieland has seen very little chaos since then, though Fyora routinely intervenes to help other nations, notably turning the Darkest Faerie to stone when she threatened Altador.

Calabrus gifted the Faeries a magical bowl which allowed them to create new land in the sky to build Faerieland without draining all their power. The Faeries used the artefact but decided to only build as much land as they needed.

When the Darkest Faerie returned 1,000 years later in Year 7, she managed to take over Faerieland and imprison Fyora. Two heroes named Tor and Roberta were able to imprison the Darkest Faerie in stone again, and since then Fyora has kept the statue in her own personal gardens.

Later in Year 12, Xandra turned every Faerie to stone in an act of maddened revenge for the perceived lack of attention she thought they were giving Neopia. A group of heroes banded together to investigate the mystery, and later attempted to defeat Xandra. Hanso eventually succeeding in turning Xandra to stone using her own magic, and although this freed the Faeries, it came too late to save Faerieland. The entire land fell from the sky and crashed near the Haunted Woods. The Faeries then set about the task of rebuilding their homes at sea level, and the statue of the Darkest Faerie went missing. Fyora eventually declared the rebuilding effort complete in late February of Year 17, although Faerieland remained at ground level.

Faerieland has the planet's only known Employment Agency, offering its residents a head start which other countries do not possess. The Hidden Tower also generates a lot of income for the Faerie Queen.

Magically enchanted food is common in Faerieland, as well as dishes that somehow resemble Faerie wings or the various elements. Faerie Bubbles are a popular treat.

Even vegetables have wings in Faerieland.

While in the air, plantlife grew in Faerieland by being potted in soil, and in some cases from drawing nutients through the clouds themselves. This has continued in New Faerieland.

Aside from every Faerie's natural ability to use magic to defend themselves, Faerieland also has a sizable army. This is headed by the Battle Faerie, which is currently Aethia. This army is rarely deployed, due to Fyora's policy of non interference for the most part. A separate division of guards maintain security in the palace, with Faerie Kougras protecting the Hidden Tower.

Many species of Petpet originate from Faerieland, and can be found at the Faerie Petpets shop. The Patamoose is known to have a natural habitat in the Faerie Caverns.

While marvelling at the architecture, why not visit: