The Haunted Woods is Neopia's spookiest location. You'll find all manner of scary looking creatures and evil schemes at work there. Remember, keep to the path! It was discovered by modern Neopia in Year 2 on the 31st Day of Collecting (Halloween). 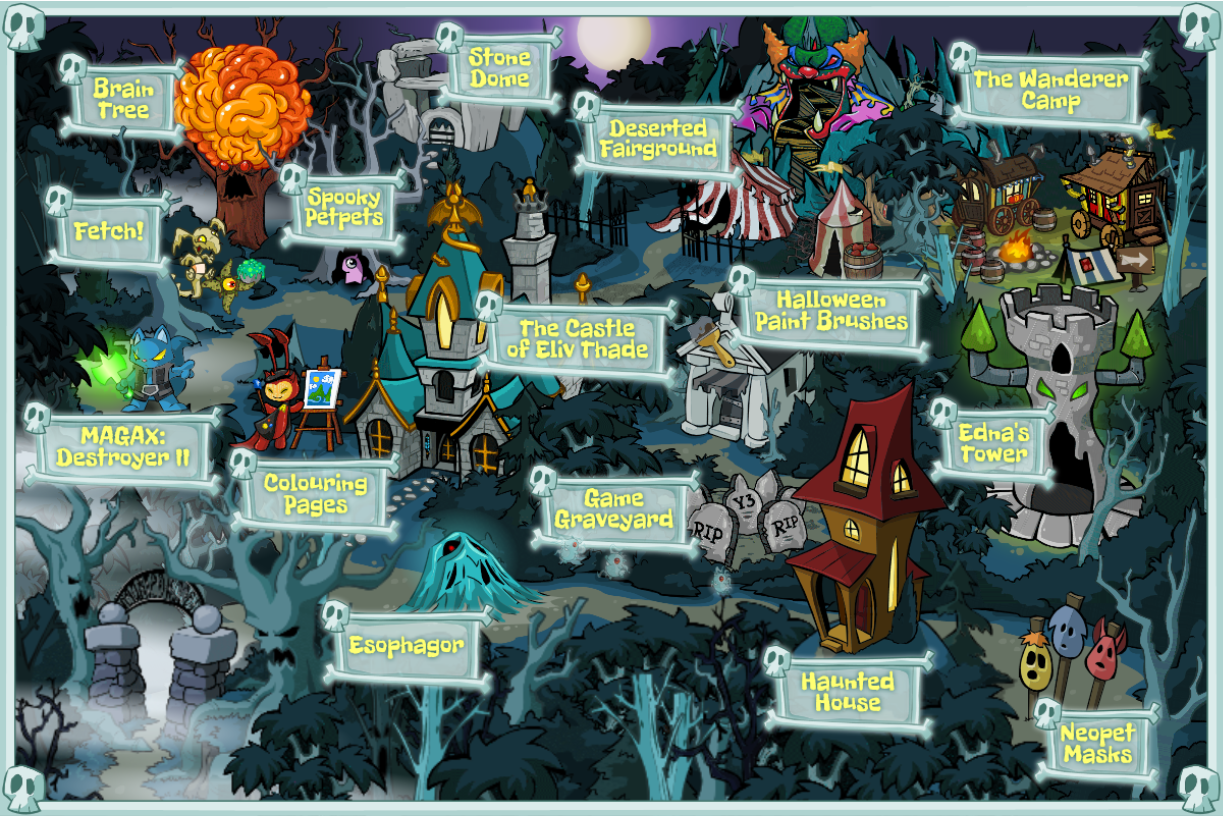 The main woods are more like a maze than a forest. A twisting path snakes between the spooky trees, as ghost Meepits dance between them. If you are brave enough to venture off the path, you can find things like Edna's Tower or the Brain Tree here. In the far corner of the woods, a travelling camp of wanderers have been dancing around their campfires for quite a few years. If you're in the mood for a chilling tale, you should go and see them. Known street named in this area include Terror Road, Evil Street, Tombstone Road, Ghoul Close, Spider Lane, and the Dark Forest Path.

Deeper in the woods is a spooky fairground maintained by a handful of creepy carnival folk, discovered in Year 4. This area is roughly one square mile in size, though it is dominated by a large roller coaster in the shape of a Chia Clown. It was thought that once the Fairground was a rather happy place, but something arrived that scared away most of the customers - thought to be an invasion of robotic clowns sent by Dr. Sloth. Hubrid Nox's castle is positioned on the outskirts of the Fairground, providing an imposing backdrop. 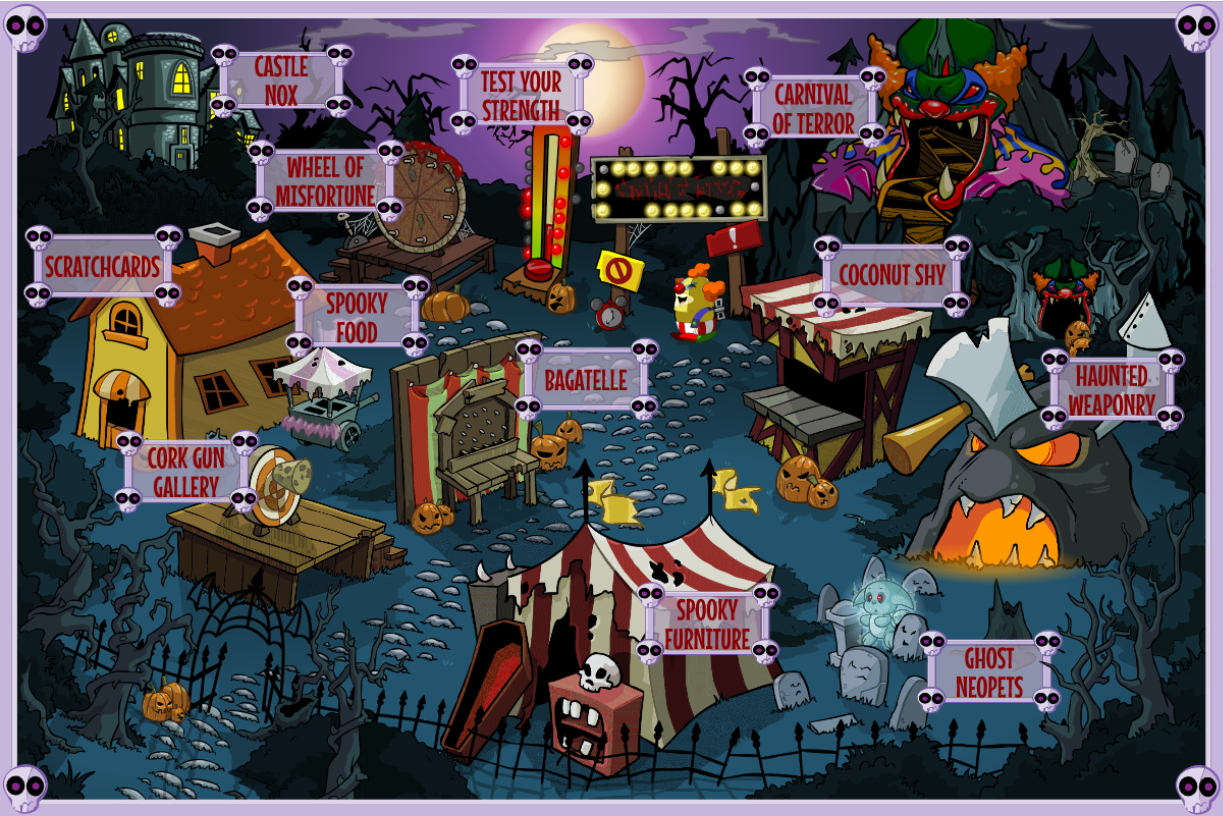 Nestled near the mountains beyond the wanderer camp, this small town was deserted for ten years after the residents fell under a curse. Now restored to its former glory since Year 8, the town welcomes outsiders with Victorian charm. Neovia has a sizable graveyard on the outskirts, the deserted Meepit Oaks Sanatorium, and a large coal mine known as the Grand Neovian Mine. One known street name is the Ghostly Corners. Neovia is known to lie on a confluence of leylines. Before the town was founded, the land belonged to an exiled aristocratic family from an unknown kingdom. They practiced dark magic, and picked the spot for the strong magical connection. Though their mansion burnt down long ago, the vaults (with floors numbering in the hundreds) containing their treasures still remain below the town. They are used by a variety of locals and monsters. 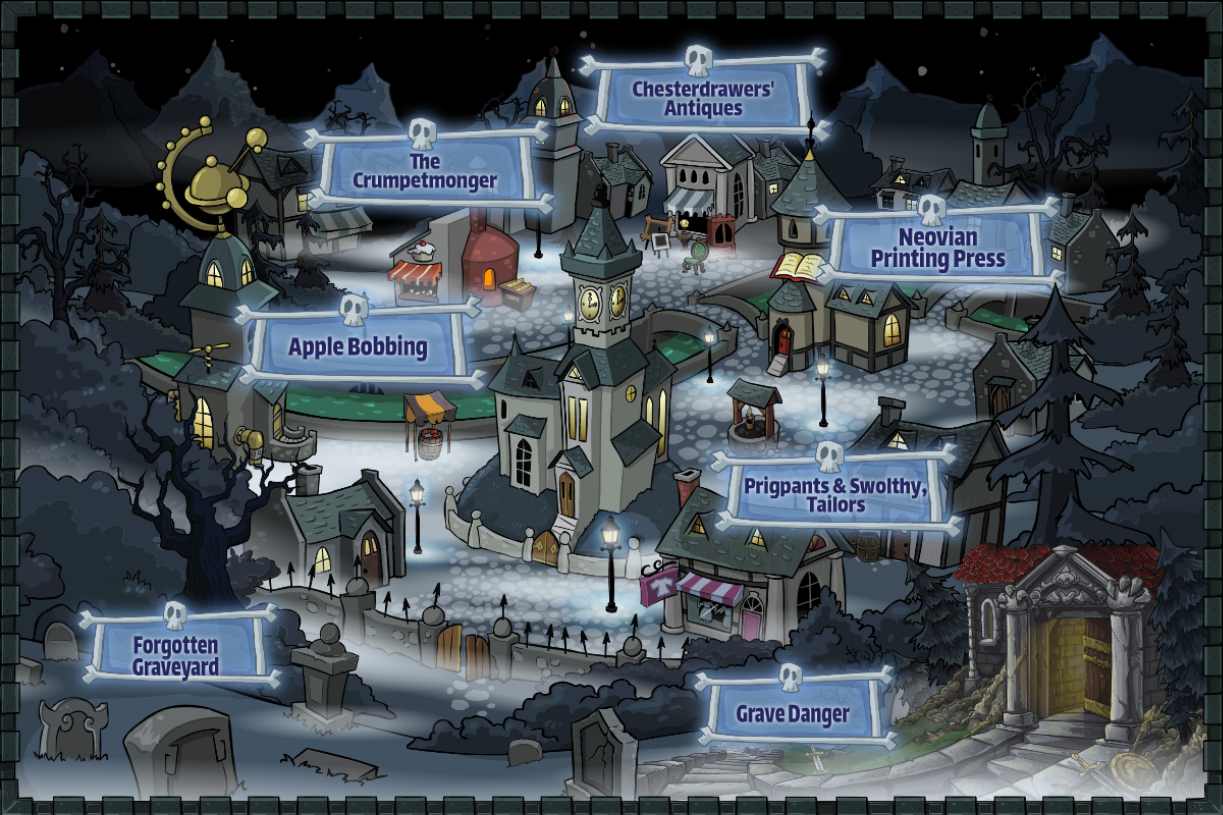 There are various other locations that exist on the periphery of the woods. A large swamp that is home to Sophie the Swamp Witch, Ilere, and Gorunda the Wise exists in the west. There is also a section of the woods known as the Werelupe Woods, where the Werelupe King holds a small dominion. This section is presumed to be closer to the border with Brightvale, and is known for the Wartroot that grows there - which is used in making Bowel Bloater Brew. There is also a sizable graveyard containing the Crypt of the Fallen in the area. Just outside the borders of the woods is a small village known as Berkshire Glen. The crater created when Faerieland fell from the sky also lies just outside of the Haunted Woods. In the mountains to the west of the woods on the border with Shenkuu, there is a hidden valley populated by a clan of giant Caprior-like monsters.

The woods lie 175 miles south west of Neopia Central, and all in all take up around 2,400 square miles of space. The terrain is mostly dank and muddy, with swampland areas, and deep caves on the borders with the Shenkuu Mountains to the west. The Demonica River is known to flow through the border of the woods. The orchid species Selerium Taniverens, used in the cure for Neovia's curse, grows in the Meepit Oaks area in very small quantities.

Here's how the Haunted Woods has changed over the years. Click on the thumbnails to view larger snapshots.

The Haunted Woods is plunged into almost permanent darkness, for reasons unknown. Rainfall is greater than average, and there is a great deal of fog, particularly in Neovia.

The Haunted Woods is something of a free for all. Almost every occupant has some dreams of Neopian domination, and have their own personal empires in different corners of the woods. Hubrid Nox, the deranged warlock, is known to have a fortress in the area with a number of minions, while the Werelupe King leads a pack of Werelupes in the Werelupe Woods. Neovia is the only area of the woods that seems to have an elected leader, having its own Mayor. However, the town is currently without one as Mayor Thumburt was turned into a Petpetpet.

The history of the woods as a whole is rather poorly defined. It is known that they have existed for many hundreds of years, as the various ghosts inhabiting the place must have been alive at some point.

The town of Neovia has a slightly more documented history. It began with the arrival of Mr. Krawley to the place. The devious Krawk sold a potion to the townspeople, promising to grant their deepest desires. This it did, for a short time, before the people began to mutate into hideous monsters. The townspeople turned on the first to drink the potion, Bruno, while his brother and sister fled into the woods. There, Reginald and Sophie met the outcast Faerie, Ilere. In a strange turn of fate, Ilere took Sophie in, while Reginald returned to the town.

Krawley meanwhile had taken on the name of Dr. Alexander, and infiltrated the Meepit Oaks Sanatorium. There, he befriended a nurse named Lucy and gave her a curious flower, before fleeing the installation. Back in the town, the mutated townsfolk decided to summon the Spirit of Slumber to solve their problems. The magical ghost agreed, but at a cost. The people of Neovia would become ghosts themselves, leaving only Lucy, Sophie, and an escaped Bruno behind.

Ten years past, during which time the inmates of the Sanatorium escaped and overcame Lucy, and Sophie grew up into a witch. A young explorer named Gilly ventured into the woods in Year 8 and came across the mutated Bruno in a cave. She led the monster to Sophie, and the two siblings were reunited. The three of them together ventured to Ilere's lair to seek help in restoring the town. Ilere was typically unhelpful, so they decided to summon the Spirit of Slumber.

They succeeded in this, with the Spirit inhabiting Bruno, and managed to return the townsfolk from their ghostly state. However, they soon mutated again and became violent. Gilly and Sophie ran while Bruno held them off.

Remember: Do not antagonise civil servants.

Sophie set about brewing an anti-potion in her shack, while Gilly was chased through the graveyards by zombies to the Meepit Oaks Sanatorium. There, Mr. Krawley instructed Gilly to head within, where she located Lucy's body and the mysterious flower. On her way back to town, Gilly bumped into Sophie, who identified the flower as a missing ingredient in her potion.

The trio reunited, and added the potion to the town's well. After only 24 hours, the mutations wore off in all but Bruno's case, and the town was restored to normality. Mr. Krawley meanwhile escaped, the entire thing happening as he had planned.

In Year 15, the first Annual Spooky Food Eating Contest in Neovia ended in disaster when the winner turned into a monster. It was hunted down by visiting monster hunters Corbin and Kell, and the day was saved.

The Haunted Woods has one main commodity—fear. Countless tourists visit the area seeking thrills and chills, while shops stock up on spooky treats and weapons. Halloween is the peak season in the woods, though they remain popular all year round. For some time the Haunted Woods has had its own marketplace too, although it is somewhat old and decrepit.

Spooky dishes are found in the woods, many of which contain slime or eyeballs. A great deal of woods delicacies are named to indicate that they contain parts of Neopets or Petpets. Outside of the main woods, Neovia enjoys a growing trade in pastries. The Spooky Food Eating Contest began in Year 15.

The Haunted Woods has no military to speak of; however the reason for this is that most of the residents are already out taking over other lands. Vast arrays of magically powerful creatures inhabit the woods, meaning anyone foolish enough to attack the place would quickly be put in their place.

The Haunted Woods has a large number of native Petpets, many of which can be found in the Spooky Petpets shop. Ghost Meepits, in particular, often plague visitors. Although not technically animals, gravestones in the area have become animated and sentient, as have the local species of trees. Some such as the Brain Tree are even capable of speech. Neovia is known to be a habitat of the Gelatinous Non-Cube, giant Globilols, and dragons.

If you can overcome your fears, why not visit:

The Haunted Woods also has its own section of the Battledome—the Rattling Cauldron! You can find challengers like the Black Pteri or the Pant Devil there.