This small community of Kikos (around 9,000) was long hidden in the hills near Neopia Central, Year 5 on the 23rd Day of Gathering. Now, it's a popular tourist destination. 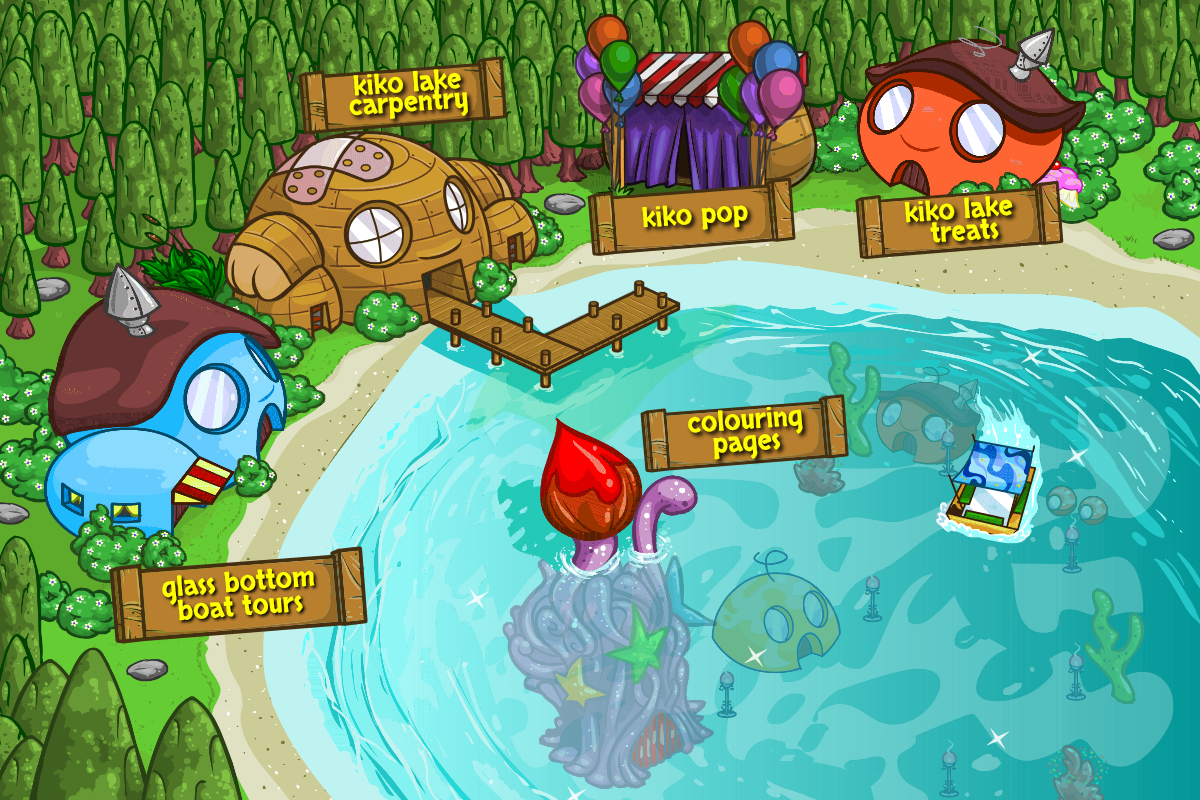 This is where most of the native Kikos make their homes, with structures carved out of the coral, much like in Maraqua. Few non-aquatic creatures live in this area, for obvious reasons. Travelers are able to gain access to this area by the use of tamed giant Tanizards, such as Draylox, who hold travelers in their mouths. Bubbles often cause problems on the lake bed, and regularly need clearing.

This beach area is increasingly being populated by those who want holiday homes. There are even a few handy shops for people.

There is some discrepancy with official documentation as to Kiko Lake's position. The Neopedia states that is it 15 miles north east of Neopia Central, yet according to the map of Neopia, it is quite obviously south east of the city. It lies inside a dormant volcano, and the lake itself is 20 miles in diameter.

Kiko Lake is also home to a considerable number of guilds.

Here's how Kiko Lake has changed over the years. Click on the thumbnails to view larger snapshots.

Given the relatively high altitude, it is always fairly calm and sunny at Kiko Lake. The shelter of the mountains helps to keep the heat in, keeping the place warm all year round.

Mayor Fuff is the ruler of the Kikos on the lake bed. It is unknown if there is a different ruler for those on the shore.

The history of the lake is shrouded in secrecy, and as few go down to the lake bottom to question the native Kikos, chances are few will ever know. The lake is the ancestral home of all Kikos, though of course, being a dead volcano means that they can't have been there forever. The lake is known to host an annual Coral Festival. The lake has been habitable since at least the time before Altador disappeared 1000 years ago.

Kiko Lake relies heavily on tourism, giving people tours on the glass bottom boat to look at the coral homes beneath. A shop at the pier also exports a lot of carpentry.

The lake's food, consisting of sticks of rock, toffee apples, and other such types of candy, are sold from a shop on the coast of the lake. Dental problems in Kiko Lake are assumed to be higher than average. Kiko Lake is known to be the source of Neopia's borovan supply. There is a field of asparagus in the forest with a river of hot chocolate nearby, causing the two ingredients to naturally mix.

The sound they make as you unwrap them is the sound of your teeth rotting...

Kiko Lake has no military to speak of. However, as the entire place is surrounded by mountains, and most live underwater on the lake bottom, it is already quite well defended.

Should you wish to have a look around the lake, your best bet is to try the Glass Bottom Boats.