Krawk Island is Neopia's largest port, and a pirate shanty town. Around 4,319 Neopets live on the shores. It was discovered by modern Neopia in Year 3 on the 5th Day of Gathering. 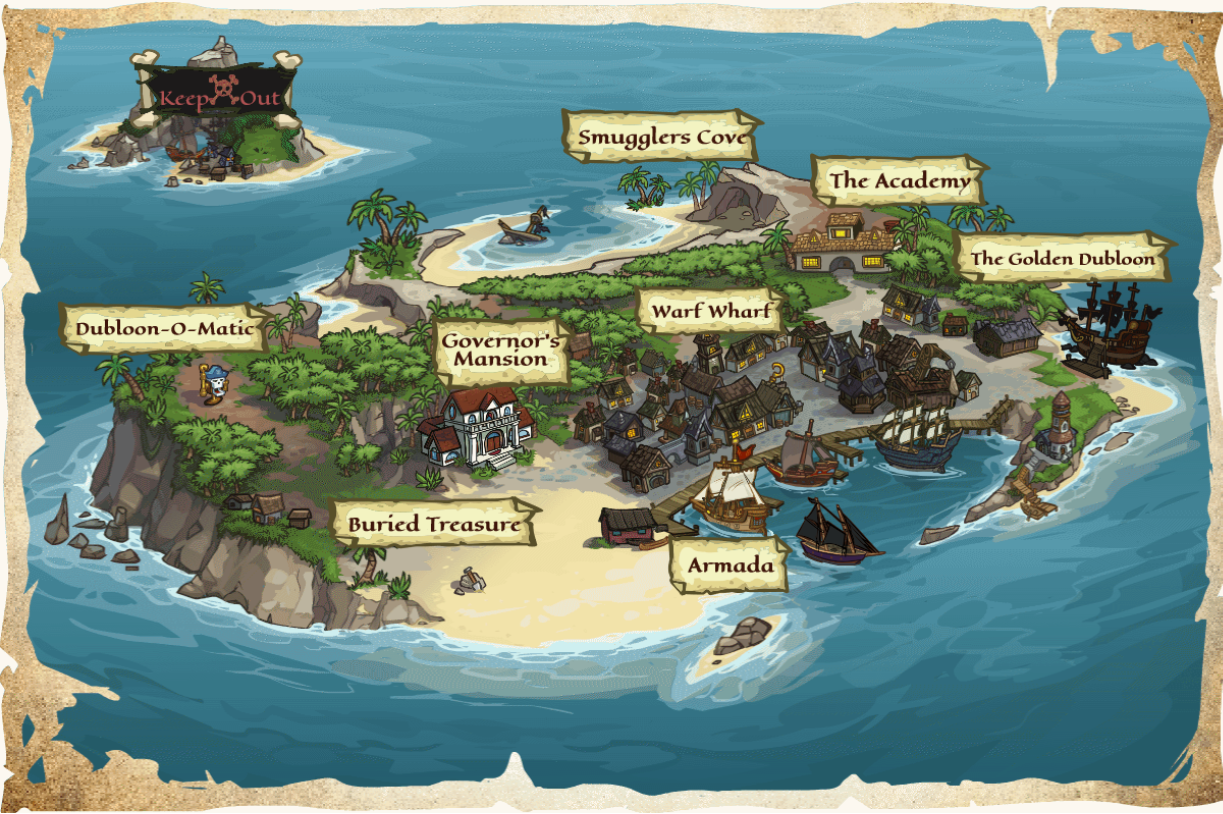 The main island is home to one of the largest ports on Neopia. Ships sail to all corners of the five seas from here. There are a great many pirate ships in the area, though these are now in decline. The shanty town (known as Warf Wharf) at the island's heart is steadily becoming more industrialised, with museums and academic centres there (the Fairweathers routinely give lectures). Smugglers are known to operate in the north of the island, near the Fungus Caves, and the fabled Pirate Caves are presumed to be somewhere on or near the island. 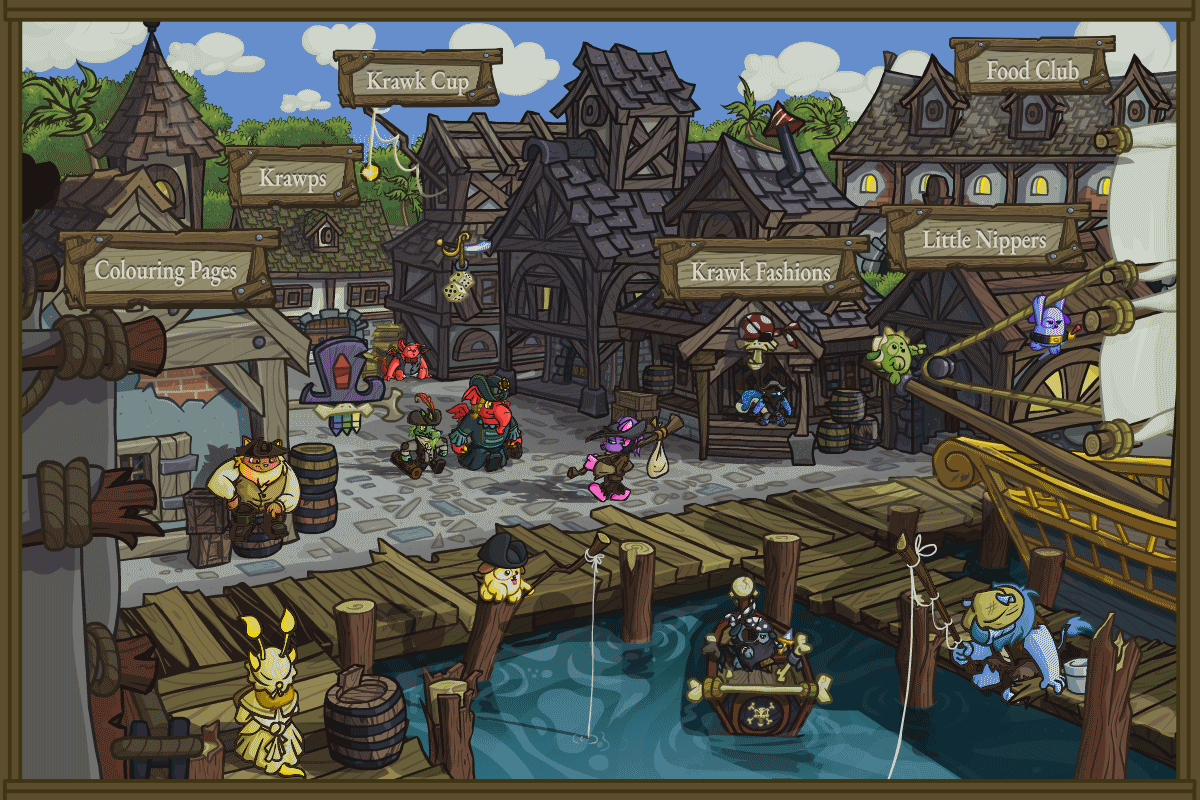 Off the northwest coast of Krawk Island is the small island of Scurvy. This is where most of the less desirable pirates went after their kind became less welcome on Krawk Island. Captain Scarblade is known to weigh anchor here often. The island was previously some distance away from Krawk Island, but was moved closer when the area was restored by the Governor.

Krawk Island is positioned 48 kilometres south west of Mystery Island. It forms one point of the Maraquan Circle, along with Mystery Island and Maraqua—an area of sea 18,200 square kilometres in size in which storms appear suddenly, navigational equipment stops working, and ships disappear. Krawk Island is 245 square kilometres in size, and is mostly sandy and coastal, but does have some jungle areas towards the middle of the island. Off the coast of the island is an area of the sea known as the Alabriss Stream, which has strong currents.

A diagram of the Maraquan Circle area.

It was only relatively recently discovered that Krawk Island is in fact a chain of free floating islands, tethered together and anchored to the sea bed. As such, the island's appearance can theoretically be changed at will by island residents.

Here's how Krawk Island has changed over the years. Click on the thumbnails to view larger snapshots.

Weather on the island is predominantly warm and sunny, but there is the occasional burst of rain.

The present Governor of Krawk Island is Gavril McGill, who took the position when he restored the island following a Krawken attack. It is unknown if he took this position from someone else, or if it was created just for him, however it is implied to be the latter.

Krawk Island was originally a chain of free floating islands that were attacked by the famous pirate Sherman. In order to protect themselves, the islanders tethered their islands together and anchored them at a fixed point on the sea bed, forming the singular Krawk Island we know today.

In the early days of Krawk Island, the port was lain siege to by the evil pirate Rokaar. The siege lasted for 43 days before General Intereg defeated the pirates. At an undetermined point in time, Krawk Island completely disappeared for one day. The next day it returned, with no explanation as to where it had gone or how. Krawk Island is the home of all Krawks. By eating the magical fungus from the Fungus Caves, the Petpets can transform into Neopets.

In Year 13, Krawk Island was attacked by a giant squid known as a Krawken. It broke the anchors tethering the various islands together, and spread them across the ocean surface. Gavril McGill was the only island resident to have his home spared, and he co-ordinated the process of finding the islands and bringing them back home. With the help of the crew of the Surly Peadacle, he restored the island (while changing the design) and assumed the position of Governor. In order to stop it happening again, he now employs locals to maintain the island's anchors.

Krawk Island uses its own currency, the Dubloon. There are many different denominations, and a handy converter on the island should you wish to get a different denomination. Income on the island comes mainly through acts of piracy or by ferrying travelers across the planet. For landlubbers, gambling is the standard, though legitimate businesses such as the Golden Dubloon or Swashbuckling Academy exist. Krawk Island has a GDP of 64,000 Dubloons.

Denominations of Dubloon used on the island.

A wide selection of seafood can be eaten on Krawk Island, while a great many taverns supply pirates with requirements of grog (strictly non-alcoholic). Fine cuisine can be found at the Golden Dubloon.

There are at least two museums on the island. One is devoted to pirates, and another to the more law abiding pioneers who first colonised the island.

No known military exists at the moment on Krawk Island; however, the tale of General Intereg defeating the pirate Rokaar suggests that at one point at least the island had some form of army. Regardless, there are more than enough armed pirate vessels on the island to deter any invaders.

Several species of Petpet originate from Krawk Island, being sold in the Little Nippers shop. Krawkens appear to be drawn to the island in significant numbers.

While you're buckling your swash, why not visit: