Kreludor is one of Neopia's moons (other small moons such as Lunaria exist that are not known to many) is also the home of a colony of Grundos. Dr. Sloth is also up to his own nefarious schemes on the surface, but it's still a lovely holiday spot! It was discovered by modern Neopia in Year 6 on the 5th Day of Hunting. 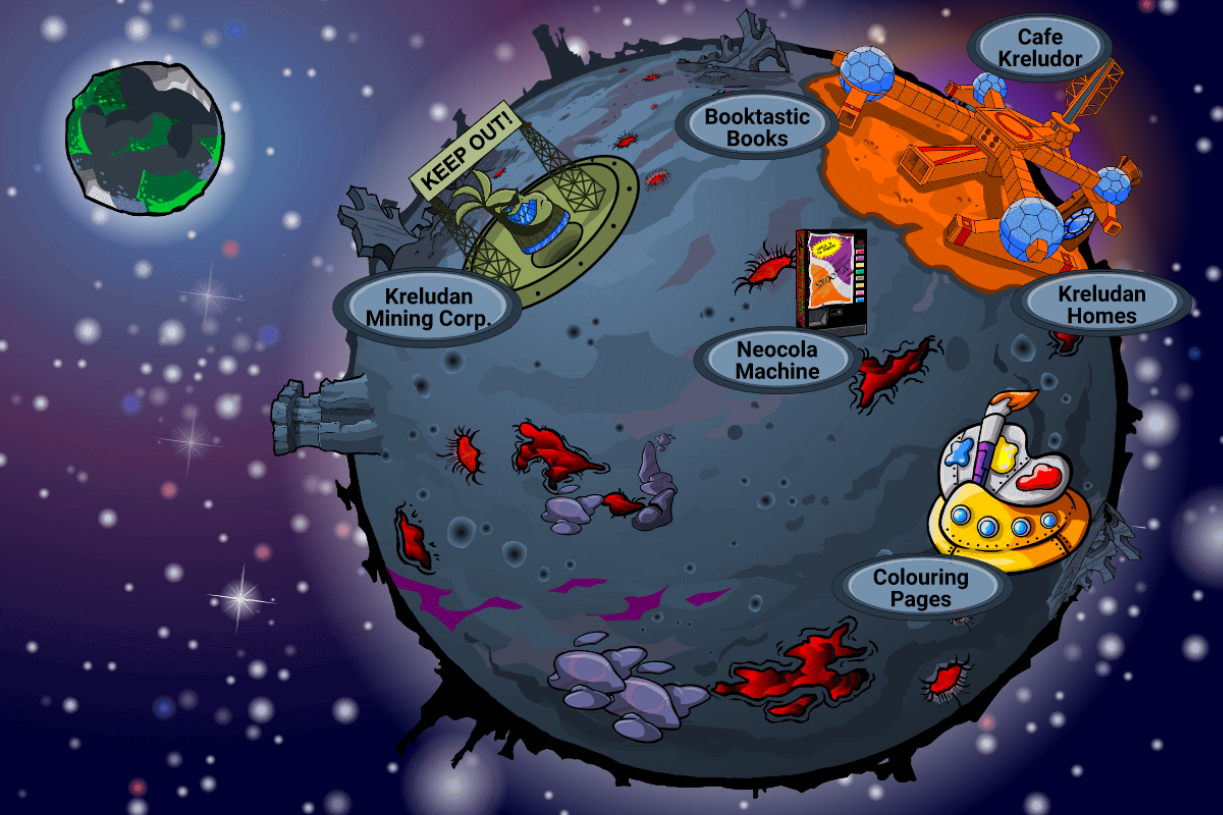 There's only really one location on the moon, the moon itself! Previously there were two colonies of Grundos, one orange and one purple, but now they live in harmony together. The colony of orange Grundos is known as Orange Central. The Kreludan Mining Corp. is positioned nearby, and is run by automated robots. The mines go deep into the moon's crust, and have uncovered some nasty aliens. Few people venture to the dark side of the moon, as it tends to be hit by a lot of meteors.

Terraforming activities have not taken place on Kreludor, so it remains a barren moon. Grundos live within specially designed habitation modules on the surface. Outside, gravity is roughly a quarter that of Neopia's.

A typical scene on Kreludor.

Here's how Kreludor has changed over the years. Click on the thumbnails to view larger snapshots.

The atmosphere on Kreludor is roughly 80% that of Neopia. The air is considered to be breathable by Neopets. Despite this, the atmosphere does not support a weather system of any type so there is no rainfall.

Previously, the moon was divided in half following the death of the Grundo leader. His two sons, who had always had disagreements, both claimed the right to lead. Zorlix ruled over a tribe of purple Grundos, while his brother Xarthab maintained control of the orange Grundos. A war with Dr. Sloth united the brothers, and now it is unknown who has control of the moon. It is assumed both brothers share the power.

A position of High Blarpxarl can be claimed by successfully removing the Kreludan Blade from a stone on the moon's surface. It is unclear if this is a position of real power in Grundo society, or if it is only now a ceremonial title.

There is some confusion as to Kreludor's role in early Grundo history. Some sources state that all Grundos come from the moon, and were enslaved by Dr. Sloth, with only the purple and orange ones remaining behind as rebels. Other sources suggest that in fact Grundos are from a planet known as Doran. It is unclear if this is a separate planet, or just what the Grundos call Kreludor.

At some point, Dr. Sloth required the Kreludite hidden in the mines. In order to access it, he sent an agent named Parlax to cause fighting between the two Grundo factions. He succeeded in this, until agents from the Resistance onboard the Virtupets Space Station reached the moon in Year 10. They unmasked Parlax as the traitor he was, and the Grundos joined forces to combat Sloth. They were successful in holding off the fleet until it was destroyed from within, and now live in peace.

Whilst the Kreludan Mining Corp. generates a substantial amount of money, it is a wholly owned subsidiary of Virtupets, Inc., the well known front for Dr. Sloth. As a result, all mining activities only profit Sloth, and not the local Grundos. Instead, they make their money from selling local space foods, foraging in the meteor fields, and writing/selling books.

Space age food is on the menu in Cafe Kreludor. Foods themed around orange or purple are common, as is the extra-terrestrial Kreluberry.

The origins of the mysterious Kreluberry are unknown.

Kreludor has a limited army comprised of orange and purple Grundo warriors. They mainly carry ray guns, though have some limited capability to shoot down space ships. A top secret portion of this militia, known as Section Six, takes on missions deemed too dangerous or risky. The only known member of this unit is Sergeant Zarex.

It appears some of the rocks on Kreludor's surface have become sentient, and prowl about in non-populated areas. Four species of such rock creatures have so far been observed.

While you're bouncing around in the low gravity, why not visit: