The Lost Desert is a large dune-laden area of Neopia, based around Egyptian mythology, with influences from various other Middle Eastern and Arab countries. It is rich in magic, treasure and adventure. Perhaps as a result, it is also rich in danger. At least 346,000 Neopets call this place home. It was discovered by modern Neopia in Year 3 on the 21st Day of Relaxing. 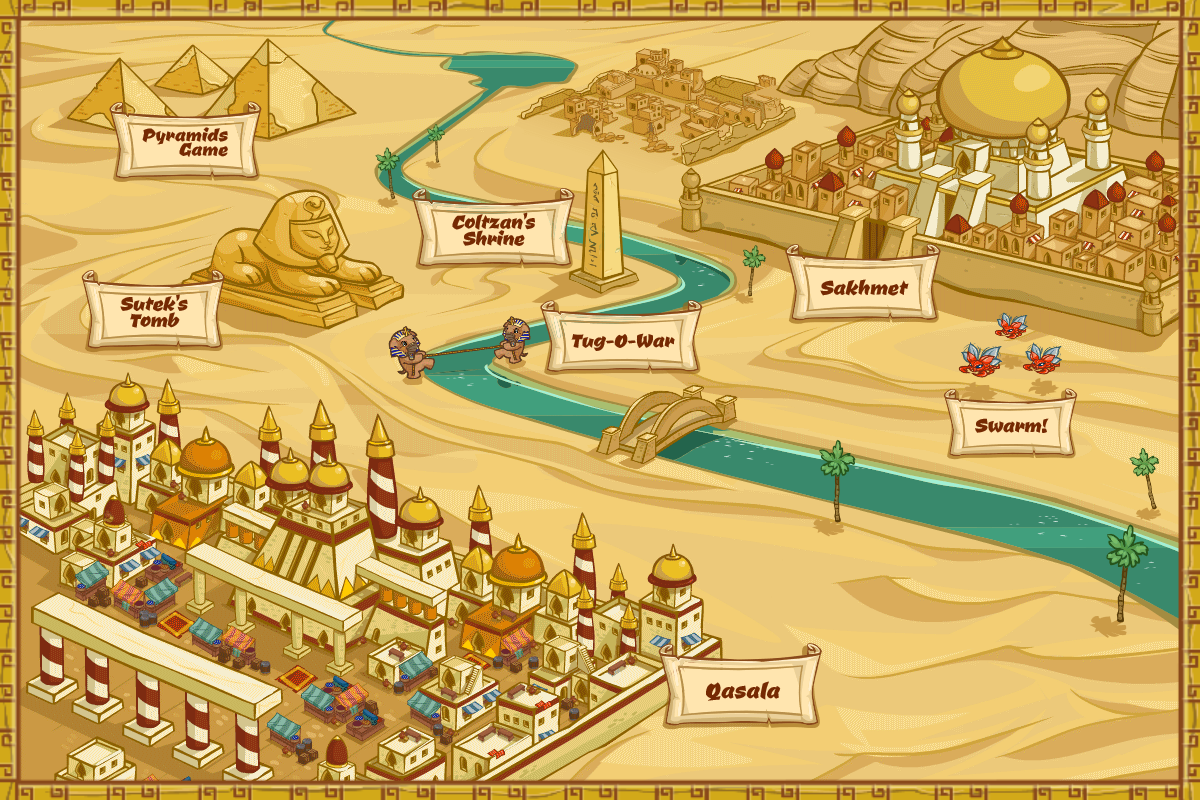 The largest Kingdom in the Lost Desert by far, Sakhmet sits on the eastern coast. At the heart of the country is the great walled Sakhmet City, though other settlements exist out in the desert sands. The Sakhmet Palace has a vast network of catacombs beneath it. They are populated by undead creatures and until recently contained, among other things, one of the keys to awakening Moltenus on Mystery Island. Interestingly, at least some form of slavery is still practiced in the city, with Princess Vyssa owning a slave. 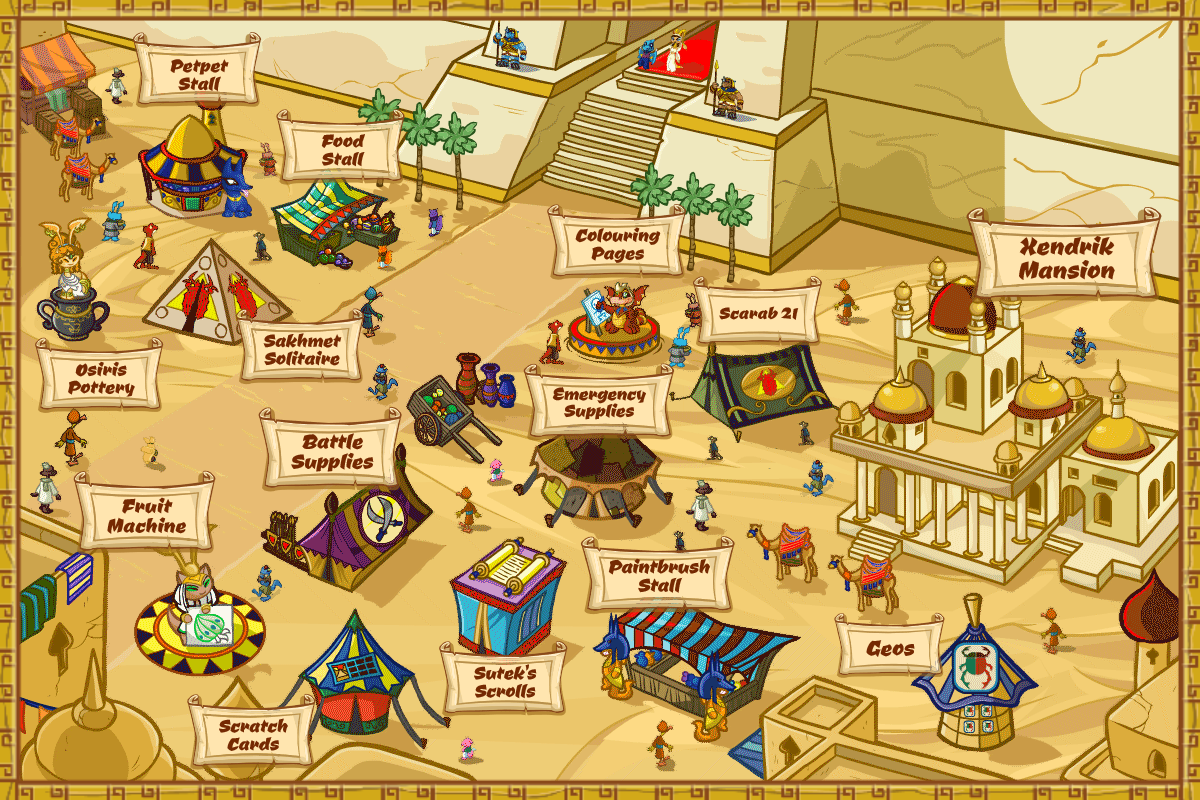 The royal seal of Sakhmet.

Qasala is a city once thought lost to time when it was destroyed roughly 200 years ago, but recently restored in Year 7 by the marriage of Prince Jazan and Princess Nabile. It lies just across the river from Sakhmet, and although it is a far less impressive sight, the people of the city are still rebuilding in the hopes of restoring it to its former glory. 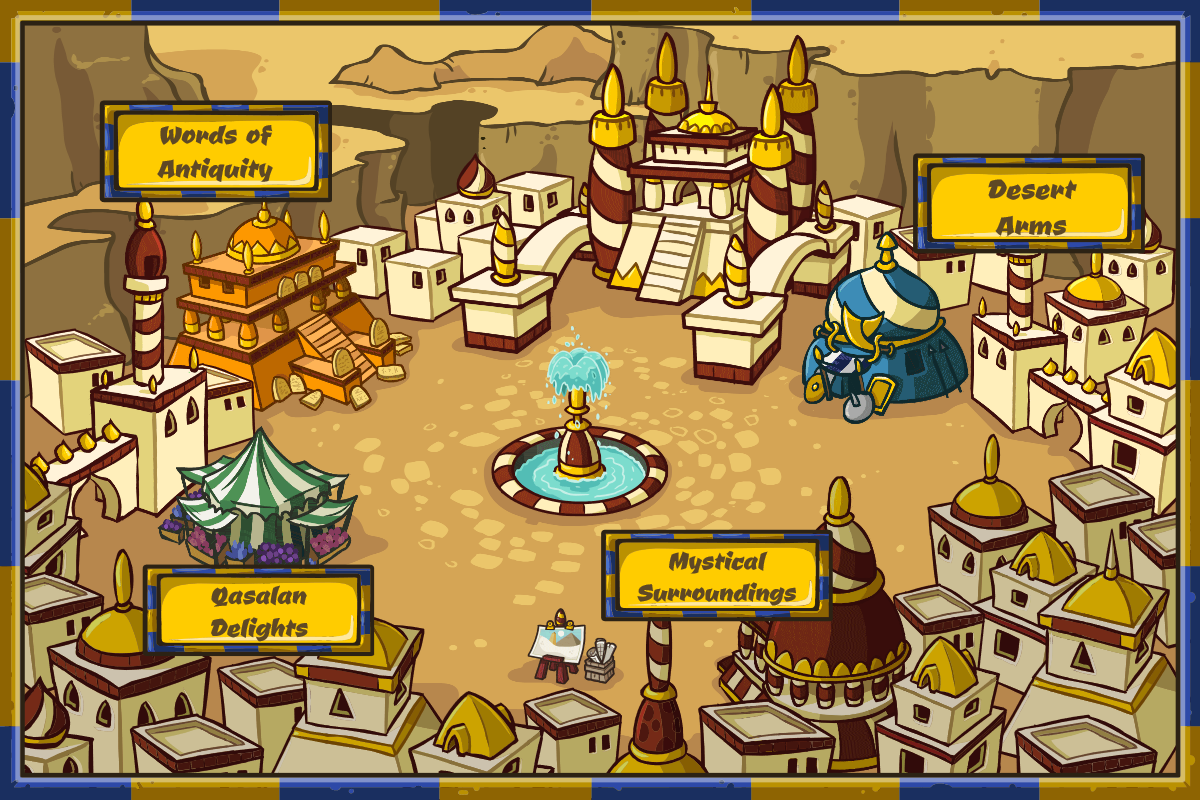 Less is known about the desert the further west you go. However, a sizable number of lesser kingdoms are known to sit in the desert sands. Wars frequently break out between these countries, so it is unknown exactly how many currently exist, and how many are in ruin. However, two named countries are Khamtef and the Lower Mentu Region. An area known as Khaef also exists. There are ruins known as Thanyros outside of Sakhmet City, but it is unknown what they once were.

The Lost Desert is approximately 280 kilometres south west of Neopia Central, directly bordering the Haunted Woods. It is roughly 480 square kilometres in size, though due to sand storms it can seem much bigger to travelers. The area is completely covered with sand; only a few oases dotting the landscape. The Seeral River runs through the centre of the region. There is known to be an area of desert heading north from Qasala to the Haunted Woods where magical mirages happen, and can harm Neopets and send them mad.

Here's how the Lost Desert has changed over the years. Click on the thumbnails to view larger snapshots.

The desert is extremely warm in the day and almost always sunny. At night, temperatures can plunge unexpectedly. There are occasional sand storms that rip through the area.

Sand storms can be sudden and heavy in some places.

As the Lost Desert is fractured, no one person rules it all. Sakhmet is currently headed by Princess Amira, who has only recently taken the title Queen out of respect for her murdered father, King Coltzan III. Amira has a younger sister, Vyssa, who runs the country while Amira is away on business. Neither sister is known to have any children. There is also a Senate, but it is unclear how much power it wields.

Outside of these two countries, little is known. King Heksas is known to have, at one point, been in control of the Lower Mentu Region and successfully invaded Khamtef to remove the ruling Khonsu Dynasty. Princess Sankara, convicted for the murder of King Coltzan III, is the only known heiress to the Khonsu Dynasty.

The Lost Desert Alliance serves as a form of council which governs of affairs of all the city-states. Members who sit on this council include Queen Amira, King Jazan, Queen Nabile, King Heksas, and Volsan. The Alliance, amongst other things, has administrative duties over the office of Warden of the Lost Desert, a protective role of unknown scope historically held by the Xendrik family but recently made an elected position. It is unknown if Princess Sankara, current heiress to the Fourth Khonsu Dynasty, has a seat on the council (due to her crimes), or if members can be removed (due to King Heksas's crimes). It is also unknown if spouses of city rulers get positions on the council automatically, as Queen Nabile only holds authority in Qasala due to marriage.

The Lost Desert is a very old civilisation, existing at very least a millennium ago. In the very early days it was populated by a race of very intelligent Gebs. These Gebs, ruled by Sutek, built the Gebmids that stand in the desert today. At some point after this Neopets arrived in the Lost Desert, and around this time the Bringer of Night was sealed within a tomb there.

There are conflicting reports as to when Sakhmet was founded. One source states that Chen-Ra, Son of the Sun, founded it in 500 BN, while another states that King Coltzan I founded it in 873 BN. It is unclear which of these is correct, or if they refer to different versions of the country. Kings of Sakhmet in the 500 years since then include King Coltzan II, King Hephaes-Ru, and King Galat-Ra. King Coltzan III took over the throne from Galat-Ra in 0 BN. Four generations ago, the Xendrik family served as the heads of law enforcement in Sakhmet city. This ended with Narmeer Xendrik, with his nephew becoming Warden of the Lost Desert.

At some point, one of the King Coltzans made a secret pact with Emperor Razul pledging a daughter of the Sakhmet royal line to marry Prince Jazan. When Qasala was destroyed, King Coltzan assumed this agreement was void. It seems unlikely this was Coltzan III, as Qasala was destroyed roughly 200 years before he took the throne. Coltzan III also became a great hero of the desert, defeating the evil Baron Nahlaki. Meanwhile, King Heksas attacked and killed King Sobek, forcing his daughter Sankara to flee to Sakhmet.

Brucey B then discovered the Lost Desert in Year 3, while at the same time it was attacked by Dr. Sloth. The doctor was looking for an ancient magical staff, which he briefly gained before being thwarted by Brucey B. To celebrate this victory, King Coltzan threw a dinner party for his closest advisors, during which he was murdered by Princess Sankara. Not long after this, a shrine was erected in his honour, and the crown stolen by the Meerca Brothers. Thankfully, it was recovered.

Peace returned to the desert only briefly. Prince Jazan arrived at the palace in Year 7 with the marriage agreement. Laughed out of the city by Princess Amira, an enraged Jazan transported the entire city to an alternate dimension filled with monsters. Two street urchins named Tomos and Nabile managed to escape that fate and followed Jazan back to the ruins of Qasala. There, they used the Ring of the Lost to teleport themselves back to Sakhmet. As they arrived in the city, Nabile discovered she was actually a lost descendant of the Sakhmet Princess Neera, and agreed to fulfill the contract by marrying Jazan.

It's not over yet!

The two returned to Qasala to rebuild, unknowingly resurrecting Emperor Razul from the grave. The undead king unleashed his magic upon Sakhmet, only narrowly being defeated by Jazan. With his father's magic gone, the curse was lifted from Qasala, and peace returned to the desert.

More recently in Year 10, under the orders of Tura-Kepek, the fire Faerie Eithne and a legion of Rock Beasts laid siege to Sakhmet in order to gain one of the keys to awakening Moltenus. Eithne succeeded in her quest, and left the desert relatively without incident. In Year 16, Amira held a diplomatic summit, only to have it ruined when thieves stole items from her guests.

In Year 21, tensions with Qasala lead to a revolt and military coup in Sakhmet that was only resolved when the Qasalan army intervened.

Aside from the usual food and weaponry exports, the Lost Desert has a good trade in treasure. Countless lost temples lie beneath the sands, and adventurers often set out into the dunes to seek their fortunes.

A lot of fruits native to the desert are used in cooking in these parts. Dishes containing Queela and Qando are common in Qasala. In Sakhmet, mummified food has become a novelty, and sand based dishes are frequently seen.

The most important food group: Sand.

The Lost Desert is a highly volatile area, and every Kingdom seems to have a large army. In the west, these armies constantly fight each other. However, in the east they are primarily used for defensive purposes. The head of the Sakhmet army is General Dacon. The Sakhmet army is at reduced strength due to the military coup that happened in Year 21, which ended in a sizable portion of the Sakhmet army being arrested.

The Lost Desert is home to at least two distinct written languages, both in the form of hieroglyphs. The exact meanings of them are not known, though researchers are attempting to translate writings found in the Temple of 1000 Tombs.

This language is perhaps one of the most common in tombs of the Lost Desert. It consists of 12 common symbols, often accompanied by less frequent symbols.

There are rough translations for three of the symbols. Saf is believed to mean 'Sign of Life', Djo 'Dual Reeds', and Tep 'Watchful Horus'.

Qasalan is a far less common variant of Sakhmetian, but in some cases the two are found together. Again, there are 12 named basic symbols, often appearing with other unnamed symbols.

Several species of Petpet call the desert home. Many can be picked up at the Petpet Stall in Sakhmet. Large Apis are often used in Sakhmet to transport goods and people. It is known that the desert is one of the habitats of the Gelatinous Non-Cube. Qasala has a significant Scarab infestation stemming from the Temple of 1000 Tombs, and Lyins can also cause problems in the palace's treasure house. Sakhmet has a similar problem with Scamanders. Neopian Protection Zone 6b is regularly attacked by swarms of bugs, which come in two main varieties.

If you can tear yourself away from exploring forgotten temples, you might want to visit:

This page was written by Herdy and last updated on August 3, 2021.