Maraqua is a land unlike any other; the entire city sits on the ocean floor! You'd better have gills or some sort of magic if you're planning on heading down there! It was originally discovered in Year 2 on the 6th Day of Collecting, and then rediscovered during Year 7 on the 18th Day of Eating.

The Ruins of Old Maraqua

Once a glorious underwater city, Old Maraqua was destroyed by an evil pirate curse and made inaccessible due to a whirlpool atop it for many years. The whirlpool has now subsided, and explorers are venturing down into the depths to see what treasures they might be able to find. 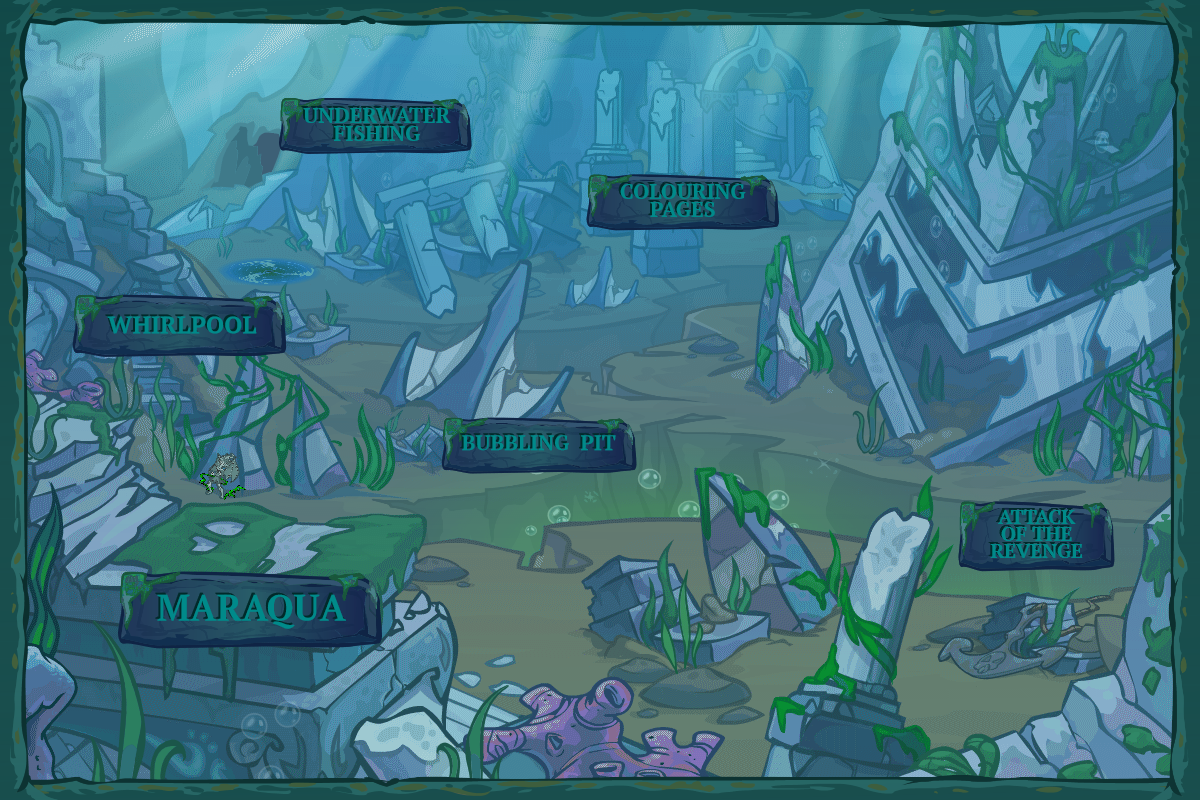 When the old city was destroyed, King Kelpbeard gathered the few survivors he could find and led them to a new colony. This reconstructed version of Maraqua is arguably better than the old one, and is certainly far stronger, managing to repel a pirate attack. New Maraqua also has a much more organic feel to the architecture than Old Maraqua did. Known street names include Slugawoo Drive, Coral Crescent, Kelp Square, Canyon Crevice, Palace Way, Deep Sea Row, Fisherman's Square, Sea Shell Circle, The Ruined Path, and Bubbling Pit Road.

Maraqua lies at the bottom of the sea north east of Mystery Island. Old Maraqua lies in an undersea valley, while New Maraqua seems to be built in open waters. Together with Krawk Island and Mystery Island, Maraqua forms an area of water known as the Maraquan Circle, in which storms are more likely, navigational equipment fails, and ships disappear without explanation. The buildings in New Maraqua are made from a combination of coral and maractite, a locally found metal.

Diagram of the Maraquan Circle.

Here's how Maraqua has changed over the years. Click on the thumbnails to view larger snapshots.

As Maraqua lies within the Maraquan circle, above water there are more storms than average. Below the surface though, little of this is noticed. Unsurprisingly, the climate below the surface is predominantly wet.

The current ruler of New Maraqua is King Kelpbeard. He was also the ruler of Old Maraqua, though at the time Neopia knew him as the Koi King. It is unknown who the throne will pass to after Kelpbeard.

At some point in the early history of Old Maraqua, the people started to worship Chiazilla after he arrived from Mystery Island. Few people knew about the city until it was discovered by the famous explorer, Professor Chesterpot.

Chesterpot had recently discovered the mythological Battledome in Year 2, and in an effort to keep it secret, he hid in Old Maraqua. Dr. Sloth sought the Battledome for his own means and attacked both Chesterpot and Maraqua with a giant robot known as Mechachiazilla. Thankfully, the real Chiazilla turned up to protect the city, and defeat his metal counterpart. Maraqua was saved, and Chesterpot returned to the surface with the Battledome to share it will all Neopians.

Some time later in Year 3, the evil pirate Captain named Dread demanded that the Maraquans pay him protection money. When they refused, he cursed the city, and it wasn't long before it was swallowed up inside a whirlpool. Refugees scattered all across the planet, many turning up on Mystery Island.

Yarr, they really did.

King Kelpbeard secretly reconstructed Maraqua with the few survivors he could find. He was greatly helped in this by Isca, a girl with the power to foretell the future. In Year 7, Isca led the pirate, Garin to the city. When he returned to the surface, word of Maraqua's survival spread to the new pirate lord, Captain Scarblade.

Scarblade launched an assault on New Maraqua, but with the help of Garin and his crew, the Maraquans were able to defeat the evil pirates. Since that day, Maraqua has lived in peace. With the threat of pirate attack gone, King Kelpbeard decided to make the existence of New Maraqua known to everyone.

Maraqua is the only place on the planet that produces maractite. This unique metal cuts through water as if it were air. It is even more effective on land, being able to cut through solid iron bars. Exports of weapons made from this metal generate significant amounts for Maraqua, with artefacts made from it even being sold in Queen Fyora's Hidden Tower.

For keeping scurvy pirates away from bath time.

In Old Maraqua, the Flotsam Chef once prepared delicious food for the people. Since the destruction of his old home, he has moved on to Mystery Island. The culinary destination for most in Maraqua is now the restaurant of Kelp. This exclusive place was fully booked for many months after the Maraquan war, but now welcomes many to their own tables. Oddly enough, there is very little seafood on the menu. Favourites include the Coral Cake, and the Ocean Platter.

After the original defeat at the hands of Captain Dread, King Kelpbeard was keen that history would not be allowed to repeat itself. As a result, New Maraqua has a sizable army. Swordmaster Talek is the head of this army, though King Kelpbeard has been known to enter battle if the need is dire enough. Maraquan soldiers are outfitted with maractite armour and weapons, making them perfectly suited to underwater combat.

There is a Maraquan Department of Justice, seemingly distinct from the army itself. There had been at least 20,468 Neopets arrested by them prior to Captain Scarblade's invasion, however it is unknown if this includes records in Old Maraqua or not.

During the Operation: Petpet Park mini-plot, the evil Yurius trapped the Petpet Park agents in a machine near Maraqua. The key to unlocking the machine had ten strange symbols on it that have not been seen anywhere above the surface. It may be possible that this is some form of written Maraquan language. In the plot, they were used to signify the numbers 1-10; it is unclear if this is their only meaning. The Maraquan language is complex enough to have different words for 'purple' at least.

Many species of Petpet call Maraqua home, and can be found in the Maraquan Petpets shop. Species of Petpet indigenous to Old Maraqua were rescued by Mystery Island natives when the city was destroyed, and are now found in the Rock Pool. Overgrown varieties of these Petpets are relatively common, as are 'monsters' such as the Chasm Beast. Many other species of fish and squid also populate Maraqua, with some being fished up at the Underwater Fishing Vortex.

Maraquan Flute Music, which can be heard on land, is well known in many other kingdoms. The music of Maraquan Harps is carried on waves, and can sometimes be washed up on distant shores.

While you're swimming about the place, why not visit:

Maraqua also has its very own section of the Battledome—the Dome of the Deep! Challengers like the Koi Warrior and the Slug Monster can be found waiting there.