Meridell is a kingdom in Neopia which is largely based around medieval England. It was discovered in Year 4 on the 30th Day of Swimming, which is now celebrated annually as Discovery of Meridell Day. You can find all sorts to do there, such as archery contests in Ultimate Bullseye II, or doing quests for the local Faerie, Illusen. 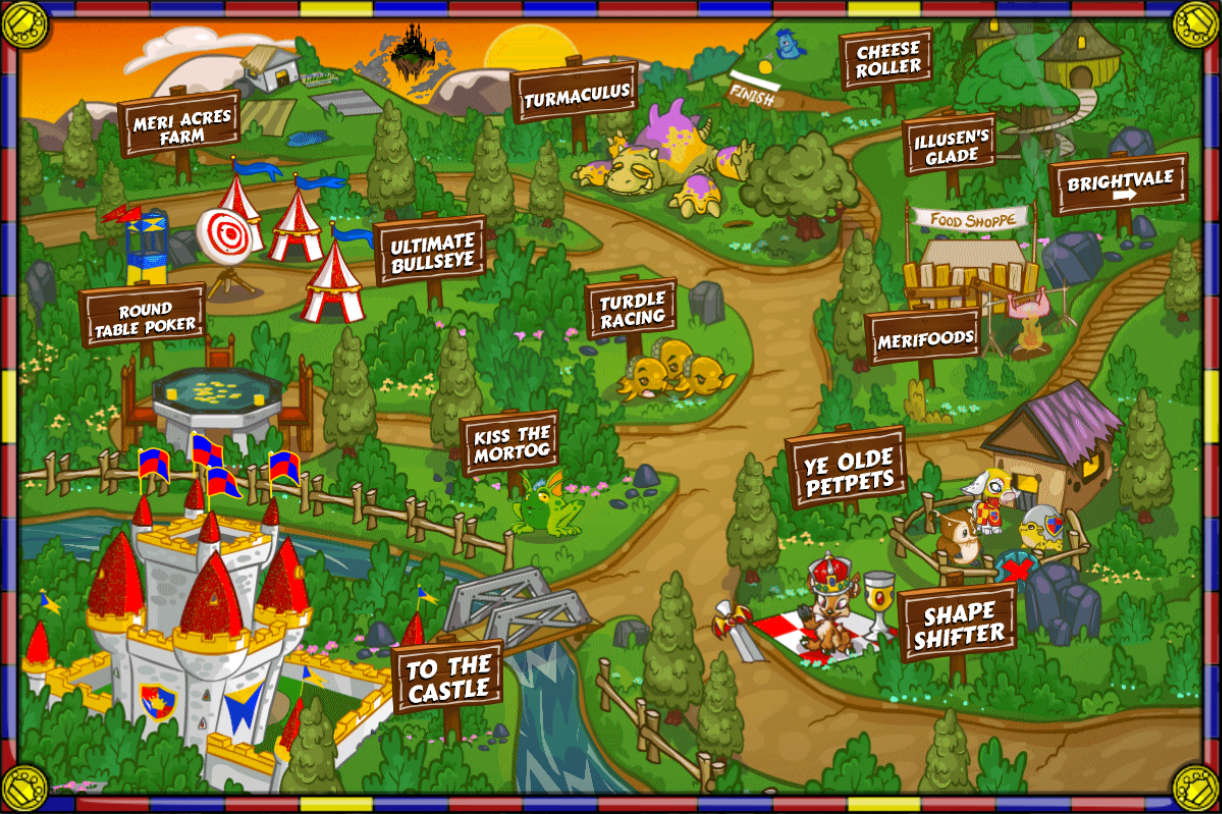 Meridell is perhaps the most subdivided of all Neopia's worlds, it is known to have counties, but the names and nature of these are unknown. A great amount of the kingdom is made up of farmland, but some notable areas are:

This is Meridell's hub, a gleaming white castle situated at the heart of the kingdom. The current castle is actually the 4th to stand on the spot it currently does. The previous versions were destroyed in great disasters known as the Great Sinking, the Great Burning, and the Great Splashing. The castle boasts an extensive courtyard, and a vast number of chambers within. The castle's dungeons house a number of undead creatures, as well as a secret path to the King's treasure house. 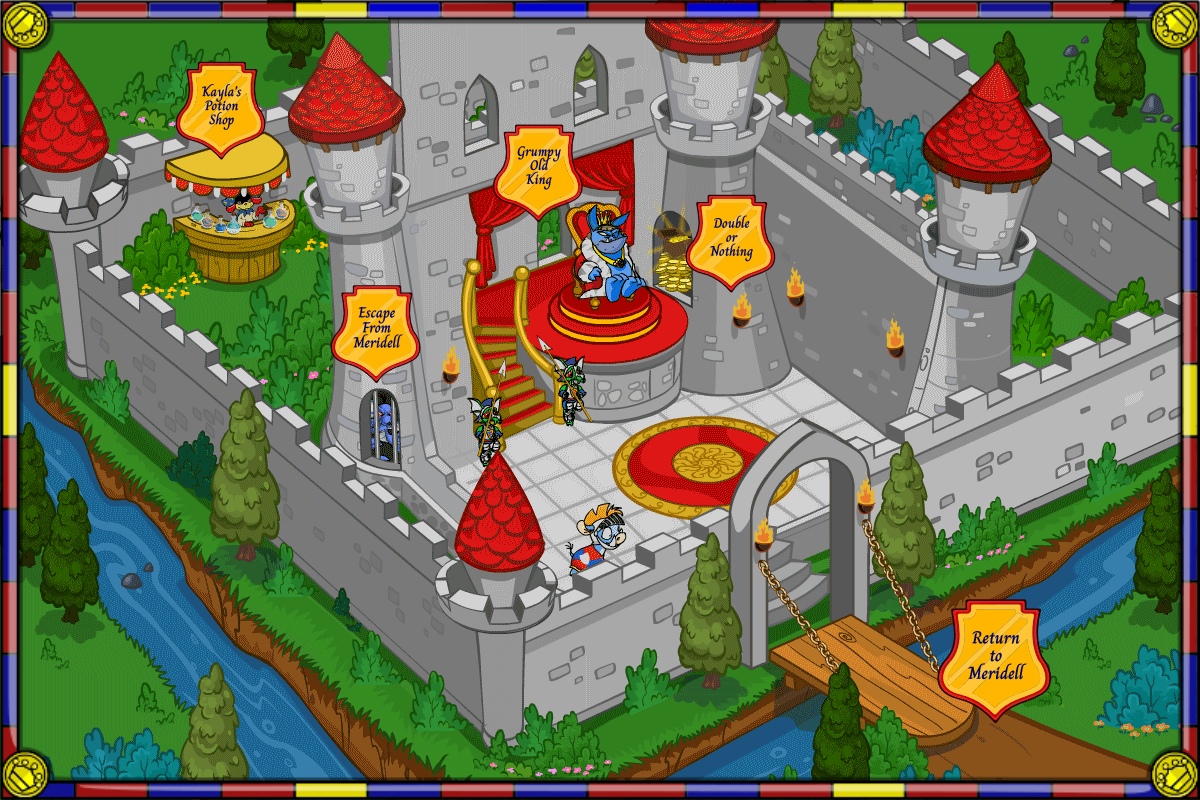 Surrounding the castle is the town of Meridell. This is a thriving trading community, and as a result has more than its fair share of thieves. To help combat this, the town's Watch often patrol the streets to stop trouble whenever they see it. The Carpenter's Arms is a popular tavern in the town. Known street names include Turnip Close, Meri Acres, Royal Parade, Illusens, Forest Drive, Peaky Stone, Verdant Valley Road, Scenic Drive, Ixi Meadows, Draik Row, and Meri Street.

Illusen's Glade and The Lightwater Forest

Founded by Illusen the Earth Faerie as a safe haven in the forests far from Faerieland, this has quickly become a village in its own right. Illusen welcomes many into her glade at the heart of the Lightwater Forest to live in the tree houses, and a band of archers have set up camp, swearing to protect the peace of the place. In the forests beyond Illusen's Glade there is an area known as Shadowglen Woods. This is a place full of monsters, including the Juppie Plant Beast. The north of this area is protected by the Emerald Brotherhood.

This is one of the many villages that exist outside of the capital, located to the south. Cogham is a village that relies heavily on the nearby mines on Drackon Ridge for its income. Due to the presence of a clan of Ixi Raiders in the mountains that prey on the villagers, the people of Cogham often have to employ adventurers to clear out the mines. Cogham is managed by Mayor Jurgin. The mine the villagers have established is known as the Meriload Mine.

This vast farmland is in fact a collection of many smaller farms; all banded together under one title. Together, they provide at least half of all Meridell's food. The crops here are abundant, and as a result many farmers have problems with unwanted Petpets stealing their crops. 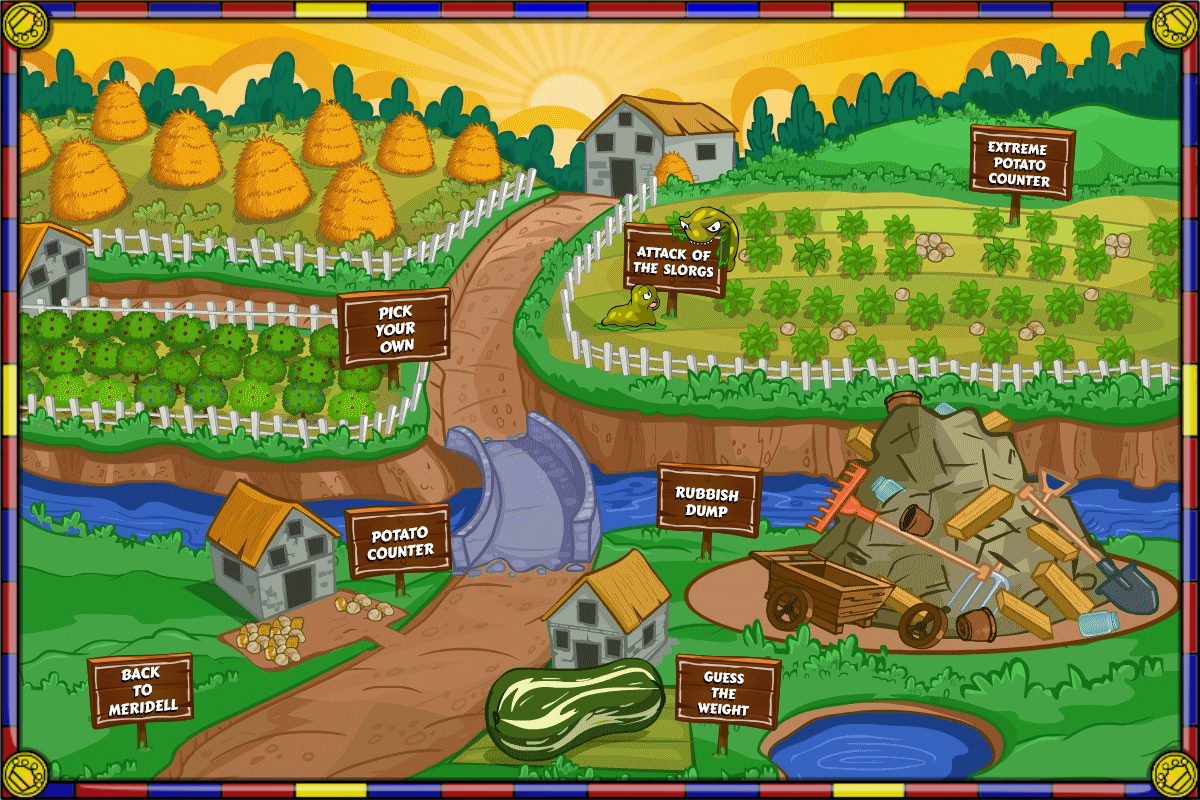 There are many small villages on the fringes of Meridell, including Hope River Village, which is on the southern Meridell border as is most famous as the site of Lord Kass's initial invasion during the second Darigan war.

Meridell is a very green and fertile land in general, with much of the kingdom being devoted to farming. A sizable amount of forests are scattered across the land, with some accessible via woodland paths and others which are less explored. The kingdom lies at the end of a peninsula, neighbouring Brightvale. Meridell also neighbours the Darigan Citadel, although as it floats above the ground, the border is ill defined and subject to change. The Lightwater River cuts through most of the countryside, and in some places acts as a border with Brightvale. The Mali river also runs through the area. There are mountainous regions, particularly near Cogham, and coastal areas nearer to Meridell Castle & Town. The Rambles are also a popular area to live, as are Greenfield, Stonewatch Road, and the Mystic Grove.

A basic map of the Meridell area.
(Note that the compass shown on this map is incorrect, north should be south and east should be west to match the known layout of the kingdoms.)

Here's how Meridell has changed over the years. Click on the thumbnails to view larger snapshots.

The climate is predominantly sunny and warm, though with enough annual rainfall to sustain farming. The presence of the Darigan Citadel floating above the land can, however, block out the sun for many residents.

The current ruler of Meridell is King Skarl I. He is not known to have any descendants, so the next in line to the throne is likely to be his brother Hagan, King of Brightvale.

Meridell's history is perhaps the most convoluted story in Neopia. Having existed for many years previously, Meridell suddenly found itself blighted by a famine under the reign of King Skarl I in roughly 300 BN. The King dispatched his Knights to find a way to solve this problem, and they returned in time with a magical orb, which, unbeknownst to him, had been stolen from the Darigan Citadel. The orb brought prosperity back to Meridell. However, the Darigan forces soon found their way to Meridell, and launched a full scale invasion. Meridell fought hard, and managed to defeat Lord Darigan, at the cost of the magical orb. Some time later, Lord Kass took over the Darigan Citadel. Tempted by the Three, Kass launched another, far more successful invasion, and completely crushed all of Meridell.

This is where things start to get a little confusing. In Year 4, Jeran, his sister Lisha and her friends fell through a time portal in the ruins of Meridell, bringing them back in time to the events of the war. The friends helped out in the first war, but it wasn't until the second war in Year 6 that they really began to play a role. Lisha was able to undo the magic of the Court Dancer, and in doing so freed all of Meridell's troops from her spell.

Next Saturday night, we're sending you back to the future!

In doing this, Lisha succeeded in rewriting history. With Jeran leading the assault on the Citadel, and with a little help of a resurrected Lord Darigan, Kass was defeated and Meridell lived to see another day. Due to this strange time travel and the rewriting of history, Meridell is considered by some scholars to now exist inside a permeable time warp. This means that, effectively, the Meridell of 300 years ago now exists in the present day.

A few years after this in Year 7, the Darkest Faerie returned to Neopia. Meridell was one of her first targets, and she succeeded in taking over most of the country, appointing the Dark Faerie Sisters (Vanity, Spite and Malice) as her lieutenants in the country. Eventually however, the young knight Tor and Princess Roberta were able to defeat the Darkest Faerie, and return Meridell to normal.

The average income in Meridell is quite low, with most inhabitants relying on farming to make ends meet. A high number of smelters also do considerable business for the army. King Skarl enforces high taxes, including the infamous Marrow Tax, which sap most citizens of any additional income they may have. What little free money people have in Meridell is often spent on gambling in such events as the Turdle Races. This pastime is somewhat encouraged by the royal treasurer, Snargan. Meridell uses silver coin denominations that have the Meridell crest on one side and King Skarl's head on the other. As most shopkeepers in Meridell accept Neopoints, it is assumed that these Meridell coins are just a local variety of Neopoint, and are not a different currency.

Given the low wage in Meridell, it is unsurprising that cuisine in the country is quite simple. Root vegetables such as turnips and potatoes are staples of most diets. Gruel and berries are also frequently eaten. For the rich there are a few delicacies though, including the revered Draik Eggs.

Meridell seems to be one of the most militarised countries in Neopia. There is a large standing army, and in times of war vast numbers of citizens are often drafted in to fight. The army traditionally uses medieval type weapons, though has expanded into the use of flying Uni steeds, giant Petpets (via magical potions), and dirigibles.

Many Petpets exist in Meridell, and can be picked up at Ye Olde Petpets. Turdles, although not native to Meridell, are regularly used for the past time of Turdle Racing. The Meridell army has been known to magically increase the size of Petpets like Turtums for use in wartime. Slorgs are a regular problem on Meri Acres Farm, and the Castle itself is known to have problems with Miamice.

Meridell celebrates an annual national day known as Discovery of Meridell Day on July 30th (Month of Swimming), the day when it was discovered. It is unknown if there was a similar celebration in Meridell before it was discovered. As part of the celebrations, locals take part in Dragoyle Hunting. This is a local sport where people seek out tamed Dragoyles that are set free in the Kingdom.

King Skarl's birthday is celebrated each year, and as part of the festivities he is traditionally presented with the biggest cabbage grown in the kingdom that year.

With such a large country, there is of course a lot to do. Some highlights are: