Moltara is a subterranean land located 7,000 feet below sea level, near the planet's core. It's accessible from a doorway hidden in a network of islands off the coast of Altador. It was only discovered by modern Neopia in Year 11 on the 12th Day of Storing. 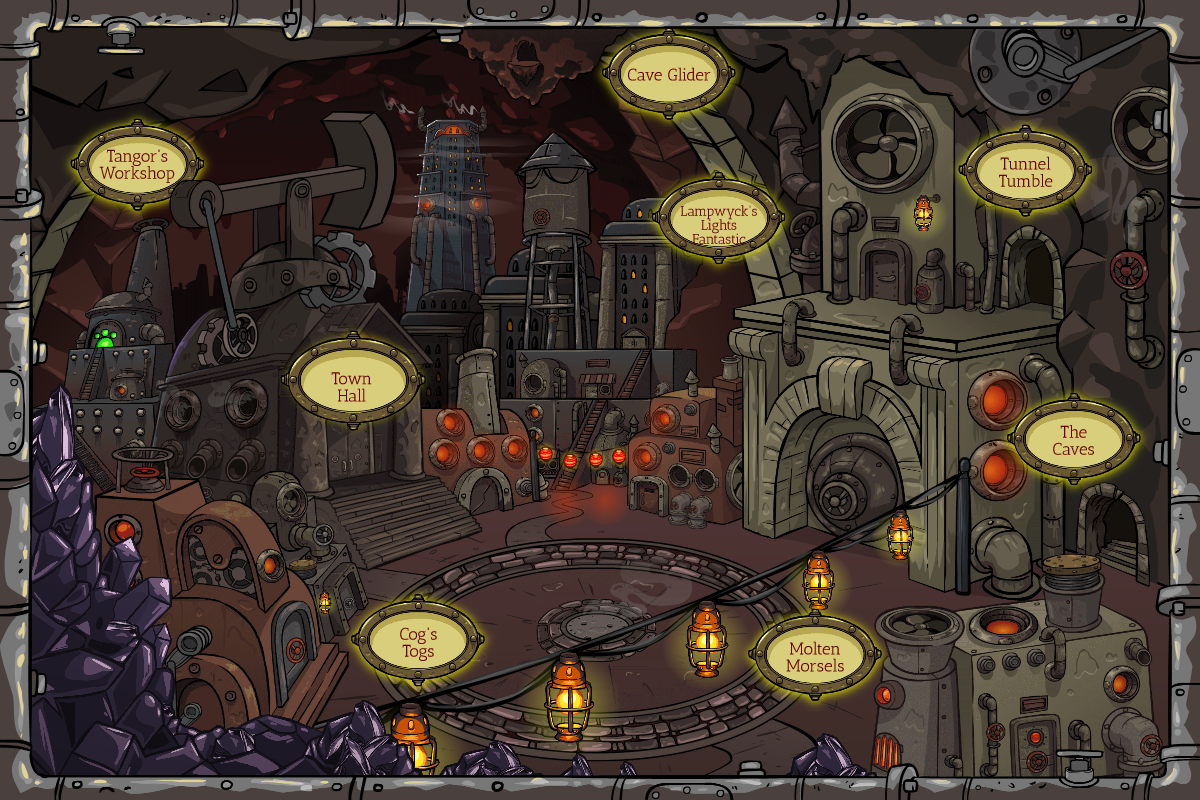 Moltara City (a city, despite having a town hall) is the first sight people see when descending the mine shaft from the surface. The people here have embraced steam technology, and are almost all engineers of some type. Most of the technology uses obsidian in one way or another, and there is a quarry where it can be found within the city. These Moltarans have been responsible for the upkeep of the machine which stabilises the core of Neopia.

Beyond Moltara City, deep in a maze of caves, live a tribe of Moltarans who have shunned technology for the most part. Instead, they have embraced magic, and have learned to control magma. This has changed the appearance of their bodies considerably. These Moltarans have also succeeded in taming a great many of the beasts that live in the caves, some of which are used to navigate the lava tunnels. However, some steam powered vessels are also used, such as the S.S. Steam Reliant. The Arcanium, the local book shop, is actually Moltara's research centre—they have developed one of the few working examples of time travel technology in Neopia. 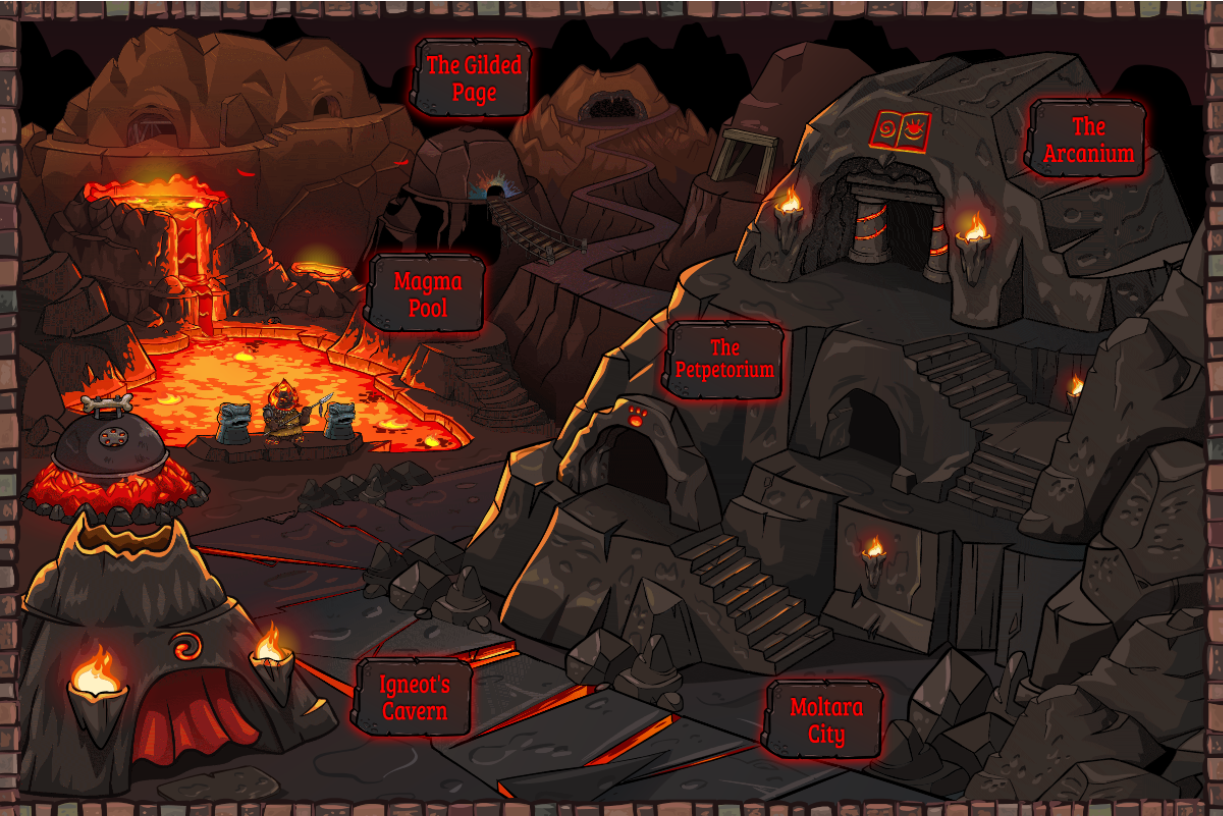 Although not technically part of central Moltara, there is an island west of Altador that provides the main entrance to the land, which until recently was locked from the outside. Keys could be found nearby hidden in the undergrowth filled with a species of orchid known as Selerium Taniverens. Although this species of plant appears in many places across Neopia, it has only been shown in such large amounts both here and on the Lost Isle. An active volcano sits at the heart of the island.

Both Moltara City and the Caves beyond lie in great caverns deep below the planet's crust (7000 feet below the surface). Rivers of lava run through the Moltara Caves, while Moltara City has managed to remain relatively separate from them. There is one main shaft leading down from the surface, but there are multiple 'back doors' that the Moltarans use for supply runs.

Lanterns are often needed to light the way in some of the deeper caves, and are often powered by coloured worms.

Here's how Moltara has changed over the years. Click on the thumbnails to view larger snapshots.

Below ground, there is of course no rainfall. As it's so close to the planet's core, the temperature is always exceedingly hot, despite there being absolutely no sunlight.

Moltara City is ruled by the Mayor of Moltara. Those in the Moltara Caves exist as a separate faction, albeit a peaceful one. Igneot seems to be the leader of these Moltarans through general consensus of the people.

Many thousands of years ago the brightest minds of Neopia saw a large amount of natural disasters occurring throughout the planet, and concluded that the cause was an instability at the planet's core. An expedition of scientists and mystics set out to investigate this by digging down into the ground. They did indeed find that the planet's molten core was unstable, and together devised a machine to keep it running smoothly. The expedition decided to stay at the core to keep watch over it, instructing that the entrance to the mine shaft be locked from outside, in case the dangerous creatures from the core escaped. For some reason however, they constructed supply tunnels to the surface that could be unlocked from within.

The Moltarans sent a book to the surface, detailing a device that would need to be constructed in the future when the core machine's parts wore down. The repair parts, disguised as junk, were scattered across the planet. Meanwhile, down in Moltara, differences in ideology splintered the group. The mystics left to travel further into the caves, leaving the scientists in the city.

Many thousands of years later in Year 11, the parts of the machine began to wear down as predicted, and natural disasters spread across Neopia. The Wise Gnorbu in the Lunar Temple of Shenkuu recovered the ancient book, and dispatched Roxton Colchester, Clara Chatham, and Jordie to locate the parts. They did so, and descended the mine shaft to Moltara. Once there, Roxton proceeded to reunite the two tribes and together they stabilised the machine for long enough for it to be repaired. With the danger passed, the Mayor of Moltara and Igneot decided that their land had been hidden for too long, and invited all of Neopia to visit them if they wished.

The city of Moltara uses a great deal of steam technology, and exports lights, clothes, Petpets, and even food based on these principles. Materials such as Red Moltite and Obsidian are popular with surface visitors. In contrast, the people of the caves sell natural Petpets from within the caves, and author their own books.

Moltaran food is simple stuff, much of it served on giant gears instead of plates. A lot of root vegetables are eaten and drunk, as they are the only things that will grow in the dark. Moltarans regularly conduct supply runs to the surface when their own supplies run short.

Moltara does not have any known military as such. However, a number of the magma Neopets living in the Moltara Caves routinely fight off lava monsters that encroach on the settlement using their mastery of lava magic and wooden spears. The existence of naval ranks such as Commodore may imply some sort of official military, but this is unconfirmed.

Moltara has much indigenous life, and many Petpets can be found in the Petpetorium. A number of glowing worms also live in Moltara, which when captured can be used as a light source. Large creatures seemingly made from lava live in the caverns, and can be violent. It appears that magma Neopets living in the deeper caverns have tamed some large creatures that are either resistant or immune to the magma, allowing them to swim through the lava tubes as steeds for the Moltarans.

An example of a Moltaran steed.

While you're down there, why not visit: