This tropical tiki-themed island is the most popular holiday spot on the planet. Grab your sun block and head on down to the beach! It was discovered by modern Neopia in the summer of Year 1 on the 3rd Day of Hiding. 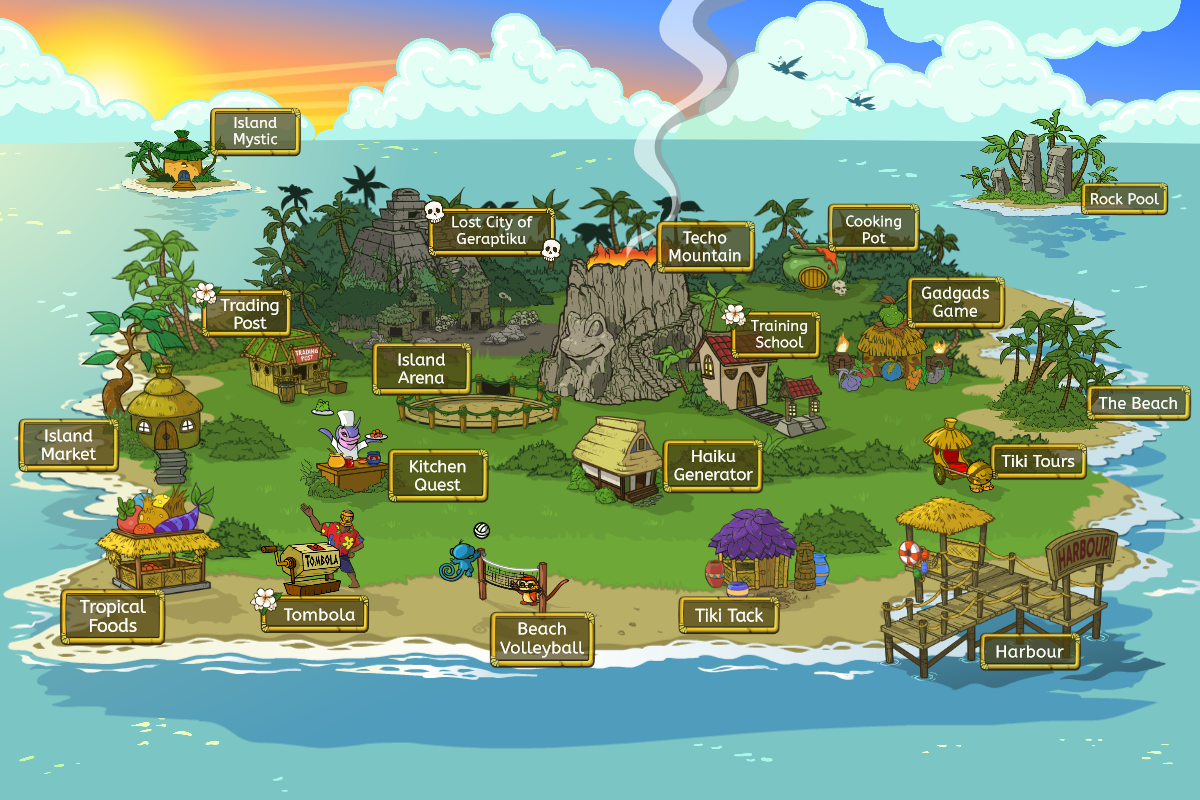 The main island is home to a variety of friendly locals that make their homes towards the island's edges. In the jungles near the island's centre, tribes of natives that are less embracing of the more capitalist ways of tourism have several villages. There are also rumours of cannibalistic tribes of coconut men (creatures resembling coconut Jubjubs). Known street names include Tiki Tack Street, Coconut Road, Harbour Lane, Fruity Path, Training Square, Safari Lane, and Island Crescent.

On the far coast of the island is the lost city of Geraptiku, once the biggest settlement on Mystery Island. This part of the island was only discovered by archaeologists relatively recently in Year 7 on the 13th Day of Swimming. The entire place is deserted, save for the ghost of a Hissi that inhabits the tomb at the city's heart. No one on the island knows exactly how the city came to be deserted, or if they do they refuse to say. There are, however, rumours that the mysterious creature known only as Potgatkerchi may somehow be involved, and that the city was struck down over the course of a single night after spirits were angered by the population's pride. 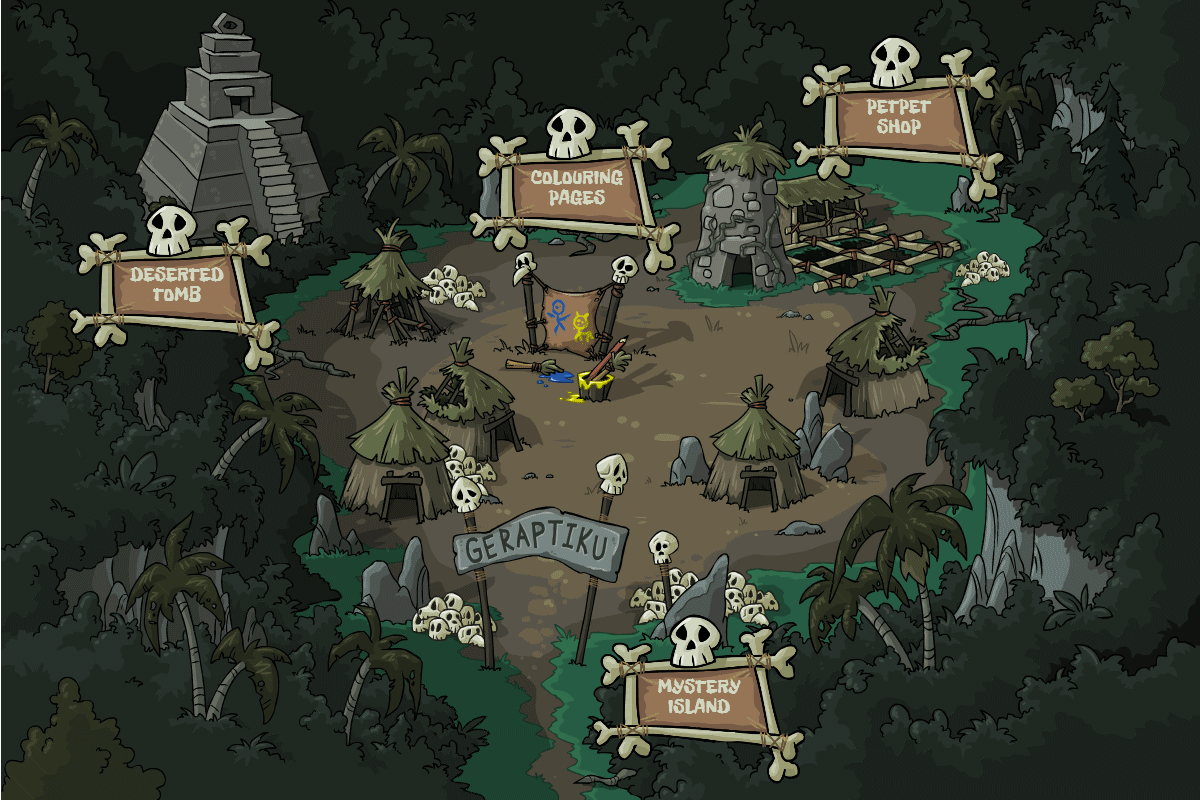 The people of Geraptiku are known to have worshiped the sun, and amongst representations of native Petpets, decorated their buildings with the following symbol:

Atop the Deserted Tomb is a stone circle that the locals call kalahnto, which roughly translates as judgement. It is believed that the fall of Geraptiku is the reason Islanders now live in scattered settlements instead of a central hub.

Mystery Island is approximately 600 miles east of Neopia Central, and is dominated by Techo Mountain, a volcano which has been extinct for roughly 2000 years. The fire based petpet known as Moltenus is kept dormant at the volcano's core, and it is thought that if he is ever fully awakened, the volcano will erupt again. The local coconut men call the volcano the Piku Paku volcano, rather than Techo Mountain. Techo Mountain is the only named member of the 16 Wonders of Neopia. Many street names are given as directions to local monuments, such as the Third Giant Stone Head on the Left. It is known that the Kumlaa River runs through the island.

The waters around Mystery Island form part of the Maraquan Circle, in addition with Krawk Island and Maraqua. This area of sea is known to experience more storms than average, navigational equipment often fails within it, and ships disappear without explanation. The area of the Maraquan Circle closer to Mystery Island is known as the Mystery Island Triangle or sometimes the Triangle of Doom, in which scurvy, seasickness, and barnacles are more likely to occur. The ocean off the coast of the Horn of Mystery Island has strong currents, while Mloka Bay has coral reefs so strong that they can shred the hulls of ships. On land, Mystery Island has golden beaches on almost all sides, with a deep jungle further inland. Several small islets surround the main body of the island. One is known to be called TikuTaku Island, whilst the one which is home to the Island Mystic is known as Umbuku Island.

Diagram of the Maraquan Circle, with the Mystery Island Triangle within it.

Other areas of note on the island include the Deep Grove, Rockriver Pass, and Goldsand Shore (the latter of which appears to have a small volcano that is not Techo Mountain). This volcano has been depicted sometimes as being carved with faces similar to Techo Mountain, only featuring a Kacheek, a Techo, and a Wocky instead. 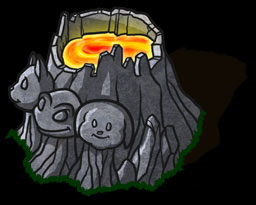 Here's how Mystery Island has changed over the years. Click on the thumbnails to view larger snapshots.

Mystery Island holds a perfect tropical climate, and though it is prone to the occasional downpour, throughout the year the weather is sunny and warm.

There is no official ruler on Mystery Island, though at some point in the past the island did have a royal family, to which Chiazilla was the guardian. When the prince of this family went missing, the royal line presumably died.

Many of the tribes near the centre of the island have their own leaders. King Kawillawoa is the leader of the Kawillawoa tribe, for example. Many tribes also worship tribal gods as their leaders, the most notable being the Pango tribe of coconut men. They worship the coconut god known as Mumbo Pango/Pango Pango.

In matters that affect the entire island, a group of five council elders often have the most say. Amongst their powers is the ability to release Moltenus from the volcano. The council is currently made up of the Island Mystic, Jhuidah, the Techo Master, the Tiki Tack Man, and the coconut Jubjub who runs the island tours.

In the island's early history, the city of Geraptiku was jointly ruled by a King and a council of twelve Neopets. It is unknown if this King's bloodline was the same as the one that once controlled Chiazilla.

At some point in the very early history of the island, the city of Geraptiku was deserted. As discussed above, it is unknown exactly why. Around 2000 years ago, the ancient elders of the island sealed Moltenus within the island's volcano. Two security systems were put in place to awake him, the secret words of the island council members, or a collection of magical talismans applied to shrines atop the mountain. The talismans were scattered to the far corners of Neopia, in the hopes that no one would ever find them.

After this, the island's prince was lost at sea. The King ordered Chiazilla to recover him. Chiazilla went into the ocean, but was unable to save him and has not returned to the island to this day.

Centuries after this, the evil shaman, Tura-Kepek, and his associate, the fire faerie Eithne plotted to awaken Moltenus from the volcano in Year 5. They kidnapped the five council members, and briefly managed to awaken the beast, before helpful Neopians managed to defeat Tura-Kepek.

Mystery Island is saved... for now.

However, the shaman and faerie returned years later at the end of Year 10, having gathered all of the talismans needed to manually unlock Moltenus. Using an army of rock beasts and other monsters, they succeeded in fully awakening Moltenus, and the creature rampaged across the island. An adventurer from Shenkuu managed to fight his way to the volcano, and destroyed all of the shrines atop it, sealing Moltenus away again.

Mystery Island relies heavily on tourism. Most people on the island are looking to cash in on visitors one way or another, be it through tours of the island or souvenirs. The tribes in the centre of the island shun this way of life, and try to live much more in isolation. Mystery Island also has its own market and trading post, meaning that all manner of things can be purchased on the island, if you have enough Neopoints.

The Mystery Island council place export restrictions on some merchandise produced on the island, most notably toys, to prevent tourists playing with them - they claim this is for safety reasons.

Mystery Island has, thanks in part to the blessing of the earth faerie Tyleine long ago, a wide range of tropical fruits and berries. Every March, in a festival that has become known as Gadgadsbogen (or Good Good Day), new fruits start to grow on the island, and fruits that grew the previous year shrivel and die. This keeps cuisine on the island constantly changing, and if you are in the mood for a new taste experience then Mystery Island is the place to go. Every year a feast of these new fruits is held on the island, which is organised by Rufus.

Mystery Island holds no significant military capabilities. However, the presence of the Mystery Island Training School, and a hidden school for Ninjas, suggests that the island may be able to muster some force of hand-to-hand combatants should there be an invasion.

Mystery Island has at least one spoken language, as evidenced by the translation of Gadgadsbogen. Very little is known about this language, however. Additionally, there is a form of written language on the island. Both training schools accept payment in the form of shaking stones engraved with symbols. These symbols are used as a form of code within Virtupets Space Station systems. The stones clearly have a purpose, as they stop shaking when placed in the Techo Master's garden, but it is unknown what the meaning of the majority of the runes are, aside from the Har symbol, which represents the 'r' sound.

Species of Petpet native to Mystery Island often crop up in the lost city of Geraptiku. A number of Petpets from the ruins of Old Maraqua have been rescued and now inhabit the Rock Pool.

Many Earth animals appear to also exist on Neopia, typically those eaten as meat such as chicken or beef, but also including more general forms of life such as flies.

The natives of Mystery Island appear to worship incredibly powerful coconut creatures as gods. Two such beings (or possibly the same one) are Pango Pango and Mumbo Pango. The coconut tribesmen carve rock idols to resemble their gods.

While you're soaking up the sun, why not check out:

Mystery Island also has its own special area of the Battledome—the Pango Palladium. You'll find challengers like Ryshu and Tekkitu there!