Neopia Central is Neopia's biggest city, and a hive of commerce. There's so much to see and do, and it's almost impossible to go everywhere if you're just visiting. As Neopia Central is considered 'modern' Neopia, it wasn't discovered and has been available in one form or another to users since Year 0. 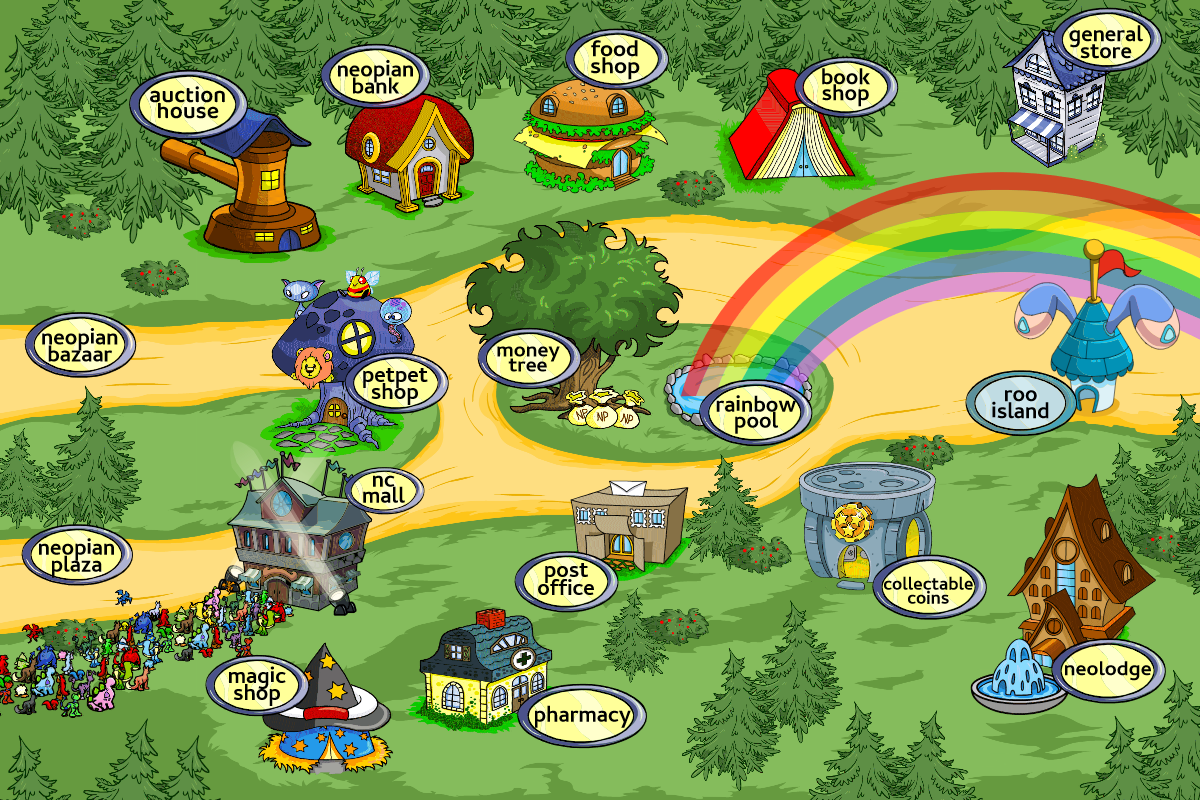 This ancient set of tombs and passageways was built long before the city you see today. They were sealed off at some point in the past, and only recently rediscovered by Professor Chesterpot in the Month of Hunting, Year 1. It's unknown exactly how long the caverns go on for, but the tunnels near the entrance were converted into a form of arts centre. A number of contests were held down there, and a few shops took position as well. The entrance to the Catacombs was signified by a statue of a poet on the surface.

During 2012, most of these shops and activities relocated to Roo Island, along with the poet statue. It is unclear what remained in the Catacombs afterwards. The deeper Catacombs are places few go to, and have become hotbeds for thieves such as the Zafara Rogue. Neopia Central also has a large sewer system. Given the size of the Catacombs, it is presumed there is some overlap between the two.

Sitting atop the old Catacombs are the main shops of Neopia Central. The basics that any Neopet could need can be found here. This area also houses the Neolodge, Rainbow Pool, Auction House, and Money Tree.

The Neopian Plaza is just off the main shops, and is the home to many of Neopia Central's less profit-orientated locations. Here, the Defenders of Neopia have set up their headquarters, alongside the Pound, Alien Aisha Vending Machine, Kadoatery, and Wishing Well. This area also contains the Welcome Centre, an important stop for any first time visitor. 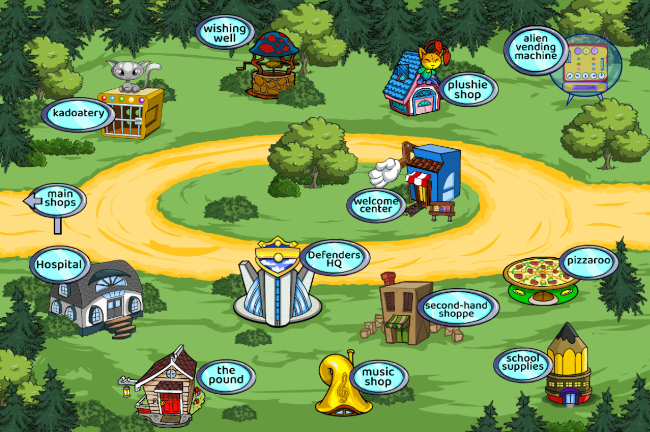 The Bazaar is also just off the main shops, lying between them and the Marketplace. A vast array of different shops can be found here, from hotdogs to furniture. 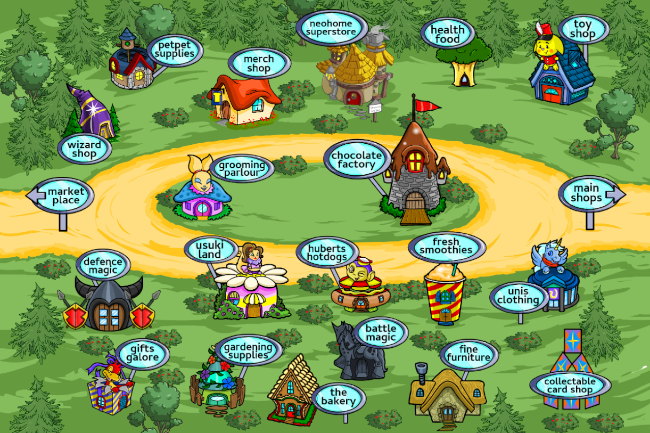 This immense district of the city, that was once known as Cute City, is made up of user-run shops. If there's anything for sale, chances are you'll find it somewhere in the maze of buildings. Finding your way might prove difficult, but luckily the Shop Wizard has set up his tent in the middle of the sprawl to point you in the right direction. Just outside the Marketplace, the Soup Kitchen offers any poor and hungry Neopets a free meal.

An ever increasing presence in Neopia Central is the Neocash Mall. This shopping centre has new shops opening up regularly. It boasts sizable displays, outdoor sections, and even entire shops underwater. The Mall also uses its own unique currency, Neocash, which is unavailable anywhere else in Neopia.

Neopia Central is located in a large valley, surrounded by forests and hills. The theme park known as Petpet Park, run by the PPL, is thought to be located nearby. This location was created with the Faerie magic of the Wand of Wishing. Neopia Central borders Kiko Lake to the south east, and is just across the water from Roo Island in the north east. To the west, a large expanse of wilderness separates it from the Haunted Woods and Shenkuu Mountains. Within most of the city, dirt tracks are used, aside from in the Marketplace where cobbles have been placed due to the heavy traffic. Despite the urban setting, there appears to be a significant amount of greenery in Neopia Central.

Here's how Neopia Central has changed over the years. Please note that these are the U.S. versions of these maps—not all sponsor offers were available in all countries. If a sponsor was not available in a particular county, the building was not shown on the Neopia Central map. Click on the thumbnails to view larger snapshots.

Neopia Central has a very sunny climate, with warm temperatures year round. A permanent rainbow stretches over much of the city, ending in the Rainbow Pool.

Neopia Central is perhaps one of the few countries in Neopia that appears to have no ruler. This may be why it has grown into such a popular community, as it can be assumed it would be a tax haven. The Merchant's Council appear to have some sway on the events that happen within the city, however.

Neopia Central is a constantly changing city. Shops often spring up and disappear overnight. In such a situation, it is difficult to keep track of the history of the place. It is possible, though not confirmed, that the city began in the time of Neoquest I, as Neopia City.

Neopia Central easily has the biggest economy in all of Neopia. It houses the only Stock Exchange on the planet, and one of only two National Neopian Bank branches. With the sheer number of shops, it's unsurprising that they are the city's main business. However, Neopia Central also has a large number of thieves. There are also a considerable amount of homeless Neopets living on the streets.

Anything and everything is on the menu in Neopia Central, given the large amount of traders that come in from other lands. Even if you don't find what you want made locally, chances are the shops will import it for you.

Yes, if you like, you can even eat a kitchen sink in Neopia Central.

Neopia Central does not appear to have any standing army, though the Defenders of Neopia do have their headquarters there. In many cases, an organisation of hundreds of superheroes is stronger than any army. The Defenders have locked up at least 1,076,592 outlaws since its creation.

A great variety of Petpet species can be found in Neopia Central in the Petpet Shop.

There's so much to see and do in Neopia Central that you're really only limited by the time you have. Here's a selection:

Neopia Central also boasts its own section of the Battledome, the Central Arena! Challengers like the Shadow Usul or the Flaming Meerca can be found there.

This page was written by Herdy and last updated on February 16, 2022.