Neopia is a planet in the Goldilocks Zone of an unknown star system, at an orbital distance to produce years of 365.25 days (equivalent to Earth). It has a day/night cycle that is 24 hours in length. It supports a wide array of life forms, many species of which collectively are grouped together as Neopets. 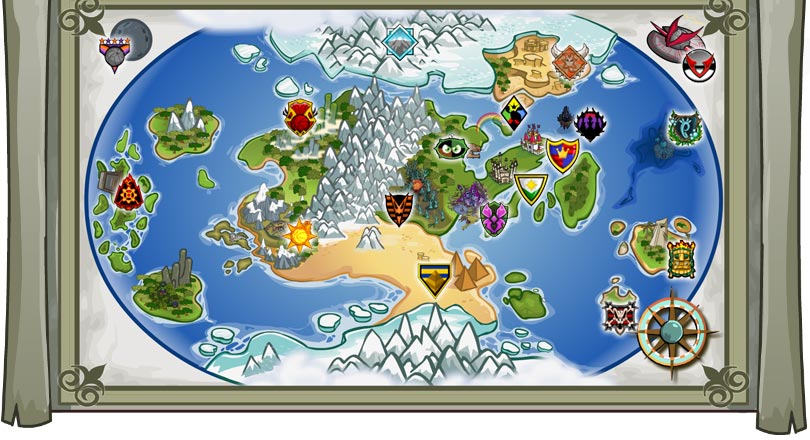 Neopia is split into two main continents and a number of outlying islands of varying sizes.

This land mass consists of the north pole of Neopia, a large mountainous area known as Terror Mountain. Where the mountain falls away there is a large rocky plateau and jungle area collectively known as Tyrannia.

The southern land mass is by far the largest on the planet. It consists of the southern pole, which is again mountainous. This land mass stretches north via an arid desert known as the Lost Desert, where it joins a large mountain range. The western area of the mountains is known as Shenkuu. To the west, the mountains give way to plains and an area known as Altador. Before the founding of Altador, this area was known as Schrommos. To the east of the mountains, a larger area of plains contains the planet's largest habitable temperate zone. This consists of locations such as Meridell, Brightvale, Neopia Central, Kiko Lake, Faerieland, and a large swamp and wooded area collectively known as the Haunted Woods.

Neopia has several islands, some of which are inhabited and some of which are not. There is Mystery Island and Krawk Island, Lutari Island and the Lost Isle. An island chain also contains a series of underground tunnels that lead to the planet's molten core of Moltara.

Neopia has five named oceans. Pressure at the bottom of Neopia's oceans is low enough to support complex life forms and a city known as Maraqua. It is known that Neopia's oceans reach depths of at least ten thousand feet. Neopia has several moons of varying size. The biggest is Kreludor, with Lunaria being one of the smaller. It has at least three free-floating islands — Krawk Island, the Lost Isle, and Lutari Island. Neopia has one time zone across the planet — Neopian Standard Time (NST). Neopia has a surface circumference of roughly 2,400 miles (around a tenth of the size of Earth). Gravity remains similar to Earth.

Neopia has an unstable molten core, which left unchecked can lead to significant geographic changes on the surface. This has until recently been kept in check by a mechanical device applied to the core near Moltara. However, in Year 21 (2019) the magic of a Bori crystal stabilised the core until at least Year 41.

There are 16 known 'Wonders' of Neopia, of which Techo Mountain on Mystery Island is the only named. It is unknown if these are natural or Neopet-made, however.

Here's how the view of Neopia has changed over the years. Click on the thumbnails to view larger snapshots.

Neopia has its own set of laws of physics. Magic exists in Neopia and the surrounding area of space, drawing on unknown energy. This can lead to very interesting developments, such as areas made entirely of jelly. Pre-destination appears to be a significant force within Neopia, with prophecies and fortune tellers being relatively common. However, it does seem possible to overcome this force in certain situations.

Magic itself appears to be nullified by particles known as Spellmotes. It is unknown what they really are or where they come from.

Neopia has several unique chemical elements, including Neopium (Np), Tyrannium (Ty), Slothite (Sl), Faeryllium (Fae), and Krawkite (Kr). It is unkown what their chemical properties are or where they fit in the standard Periodic Table. Naturally occuring materials that do not appear elsewhere are also present, which have unique properties, likely due to exposure to magic. Maractite is a metal that can cut through water with no resistance, which is commonly mined near Maraqua. Kreludite is a mineral found under the lunar surface of Kreludor, and can be used to mutate organic life. Red Moltite is a crystal that is found near Neopia's core, and is used in the production of some robotic Petpet species.

Neopia lies in the habitable orbit of its star, and has a wide and varied climate. Arctic conditions are present at both poles, and there are temperate areas around the equator. Weather in Neopia operates on both scientific and magical principles, making it largely unpredictable and unreliable. This magical involvement also allows the Neopian seasons to operate through some form of communal belief, being able to be influenced by the will of the people. Some countries in Neopia have been known to completely ban winter, for example.

Neopia has no central government. Individual areas claim varying amounts of sovereignty. However, due to her abilities and time in her position (many thousands of years), other rulers sometimes defer to the judgement of Queen Fyora of Faerieland.

Some individuals have different plans for Neopia than Queen Fyora.

Over two thousand years ago a magically advanced civilisation of non-Neopet beings known as the Kayannin lived on Neopia, before vanishing entirely.

This left Neopia as a barren planet devoid of life. It was discovered by Dr. Frank Sloth and he claimed it as his personal laboratory on which to breed genetically altered mutants. At some point, by unknown means, magic arrived in Neopia and this caused the spontaneous mutation of many of Sloth's creations. They became the earliest forms of Neopet.

Not long after this, Faeries arrived in Neopia. They established the floating city of Faerieland in the clouds and began helping Neopians. Early in Neopia's history, a great earthquake buried a section of the prehistoric civilisation on the northern continent, producing the land that would come to be known as Tyrannia. Eventually, a Circle of Twelve established a near global rule. However they were betrayed from within and the Empire crumbled. After many years of strife with monsters roaming the land a time of relative peace was ushered in.

The Bori civilisation was founded within the caves of Terror Mountain, and fearing a creature known as the Bringer of Night, they sealed themselves in a many thousand year long sleep. Around this time, the states of Altador, Meridell, and Brightvale were founded. An expedition to the planet's core to solve recurring natural disasters also ended with the creation of Moltara. Altador, much like the Circle of Twelve, was betrayed from within and voluntarily entered a thousand year long sleep. The ancient civilisation of Geraptiku on Mystery Island also mysteriously disappeared.

Around 300 years ago the lands of Meridell and Brightvale were invaded and destroyed by the flying Darigan Citadel, before the Citadel itself was destroyed. These events were later undone via time travel from the modern day. Versions of these three lands from 300 years ago now exist in modern day Neopia due to the effects of a semi-permeable time bubble.

Eventually, Dr. Sloth returned with a plan to turn Neopets back into their original versions. He failed, and a space station fell into steady orbit around Neopia. Maraqua was also destroyed by a whirlpool, but was later rebuilt in a different location. Tyrannia was also uncovered from its isolation. Over the following years, many areas of the globe that were isolated were gradually rediscovered, such as the Lost Desert, Altador, Shenkuu, and Moltara.

Due to all Faeries in Neopia being petrified at once, Faerieland eventually fell out of the sky. It now occupies a space on the southern continent in a crater caused by the impact.

Most of Neopia uses a standard currency, the Neopoint. There are local currencies in some areas, however, like Dubloons on Krawk Island, and Neocash in Neopia Central. The Neopian economy is varied, and most lands trade with each other.

Neopia has a lot of common foodstuffs and plants similar to those found on Earth. It also has a number of unique fruits and vegetables, many of which have been altered by the presence of magic.

Neopia has a considerable military might. Most countries operate standing armies of large sizes, and the Neopian public at large is well trained in combat. There is a large variation in the sophistication of warfare, from sharpened sticks in Tyrannia to spaceships and laser beam weapons onboard the Virtupets Space Station.

Neopia is home to 55 unique species that are collectively known as Neopets. The Faeries are also a sizable presence. Petpets are a collection of several hundred semi-domesticated animals. They have some sense of self-awareness, and are capable of complex conversations between themselves — though they are rarely understood by higher forms of life. Petpets have a much more advanced civilisation in the alternate universe of Petaria. It is possible for many types of Petpet to grow to sizes that dwarf Neopets. A further collection of insect-like creatures also exist, grouped together as Petpetpets.

Most Neopets speak the same language of unknown name. There are also other languages spoken only in certain areas, such as Tyrannian, Sakhmetian, and Qasalan.

The name of the galaxy in which Neopia is positioned is unknown, but a nearby galaxy is known as the Nova Galaxy. Intelligent, Wain-like space faring civilisations not native to Neopia have divided the Neopian galaxy into four quadrants, one of which is known as the Vernax Quadrant. It is unknown if other species, including Neopets, use these designations. Stars form many constellations in Neopia's night sky. Twelve are named after the original founders of Altador. A Gulper constellation is also known to exist.