Heads up! Petaria was featured in the game Wand of Wishing.

Petaria is an alternate universe to Neopia, populated almost entirely by Petpets capable of speech. It was created by the Founder at least 1000 years ago.

Miamecca is the largest city on Petaria, founded soon after the Founder disappeared. It has trade routes to most of the other populated areas of the planet, through desert caravans and the ports on the city's west side. A sizable market stocks many of the most powerful items in Petaria. The palace is a sight in itself, though entrance is hard to gain. A large catacombs system runs underneath the city. 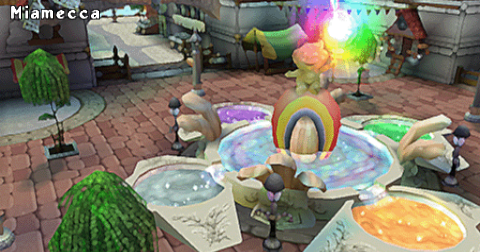 A typical scene in Miamecca

The Monastary of Meow

This is a mountain retreat for Meowclops monks who follow the first Petpet to inhabit Petaria, Meow. It is hidden in the depths of the Forgotten Jungle. The Founder left a device capable of showing his current location at the Monastery, hidden in the Chamber of Seals.

This predominantly farming village is populated mostly by Symols. Mushroom mines nearby provide a sizable income for locals. Several large farms dot the landscape around, such as Haffaklax Farm. The Sage Bush makes his home here.

This desert land is inhabited mostly by Ganuthor traders who use Apis to carry their loads. It is one of the oldest areas of Petaria, being home to the Temple of the Founder which details Petaria's early history. The Molten Caverns, home to the elemental guardian of fire, are also nearby in a volcano known as the Cauldron of Fire.

Denapas was once a grand city, but was overrun years ago by plants. The citizens fled to Miamecca, and the city is now more or less deserted bar the odd adventurer. The elemental guardian of earth now lives in the area. The legendary Rose of Denapas only grows here. 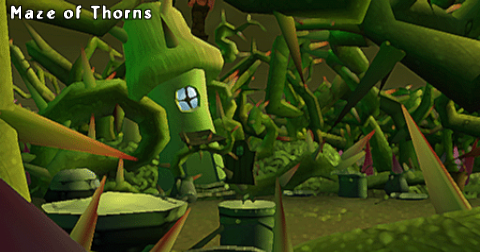 A scene in the ruined city of Denapas.

Hidden in the skies above Petaria is the lair of the air guardian, who uses what he calls 'breathers' to produce the planet's weather. Several of the clouds have been made solid so that Petpets are able to walk on them.

In the frozen wastes of Petaria, this land mass holds many shipwrecks from pirates who got too close. It is also the home to the water guardian.

This small island is the home of the elemental guardian of light. Dark crystals fill the area, along with crystals that glow with the colours of the rainbow to open the door to the Light Guardian's lair.

Much like Neopia, the geography of Petaria is wide and varied. There are arid deserts like those in the west, and icy lands across the sea. In general Petaria appears to be smaller in scale than Neopia, to better accommodate the Petpet inhabitants.

A possible map of Petaria.

Again, the climate of Petaria varies. The Air Guardian uses his Breathers to keep the weather more or less constant in specific areas. Most of the planet is temperate, with exceptions in the scorching hot desert and freezing cold icebergs.

An example of one of the Air Guardian's Breathers.

Ultimately, all Petpets are ruled by the Founder, however he has been absent for a long time. As a result, most lands now have their own ruler. Miamecca is currently ruled by the Empress, the fourth ruler in the city's history (the others being a Feepit, an Erism, and King Toogah). The village of Terrasymol is run by the Mayor, and the Monastery of Meow is headed by the abbot, currently Khao Manee.

The elemental guardians also seem to have some degree of power over their surrounding locations, in particular the Air Guardian.

At least a thousand years ago, the Founder happened upon the Wand of Wishing. He wished to rule the world, but the tricky nature of the wand's magic meant that he in fact became the ruler of Petaria. Six elemental guardians were called into being by the magic, but scared of power, the Founder fled.

In Year 8, the magic of the Wand of Wishing activated again. A Werhond belonging to the possessed Archos stole the Wand, heading through a portal into Petaria. Megan's Petpet, Fluffy, followed. The Werhond formed a gang of bandits near Terrasymol, frightening away locals with fake Slorg monsters. Fluffy put a stop to that, and later stopped their invasion of the Monastery of Meow. Reaching Miamecca, Fluffy met the Empress and was thrown into the city's dungeons by her advisor (secretly the Dark Guardian). Fluffy escaped the prison, and fled to the desert. There, the Founder revealed himself to Fluffy, as did the Dark Guardian and the Werhond. In the confusion, the Werhond gained the Wand of Wishing.

In Year 10, portals to Petaria began to open in Neopia, and new species of Petpet arrived through them. The PPL gathered the new Petpets, taking them to the reserve of Petpet Park.

Much of the world economy focuses on Miamecca, with most traders passing through the city gates at some point. Mushrooms are excavated from the mines near Terrasymol.

Miamecca has a wide array of food. Cafe Mia in Miamecca is known to provide some of the best meals available. There are region specific foods in most areas, which locals in Miamecca love to collect.

Miamecca has the largest standing army on the planet, though the monks at the Monastery of Meow are well trained in hand to hand combat. A sizable number of bandits formed under the rule of the Werhond, and not even the forces of Miamecca could hold them back.

Petaria citizens celebrate Founder's Day on an unspecified day of the year, with celebrations focused on the Founder's creation of Petaria. In the Monastery of Meow, the monks worship Meow in an almost religious manner, and have many customs built around meditation.

This page was written by Herdy and last updated on September 28, 2018.