Roo Island is a small landmass that many people often miss on the map of Neopia. Despite this, it's still a popular tourist attraction, and has a population of around 275,000, most of which are Blumaroos. Although it was known about for a long time, Roo Island was not officially 'discovered' and made visitable until Year 5 on the 19th Day of Relaxing. 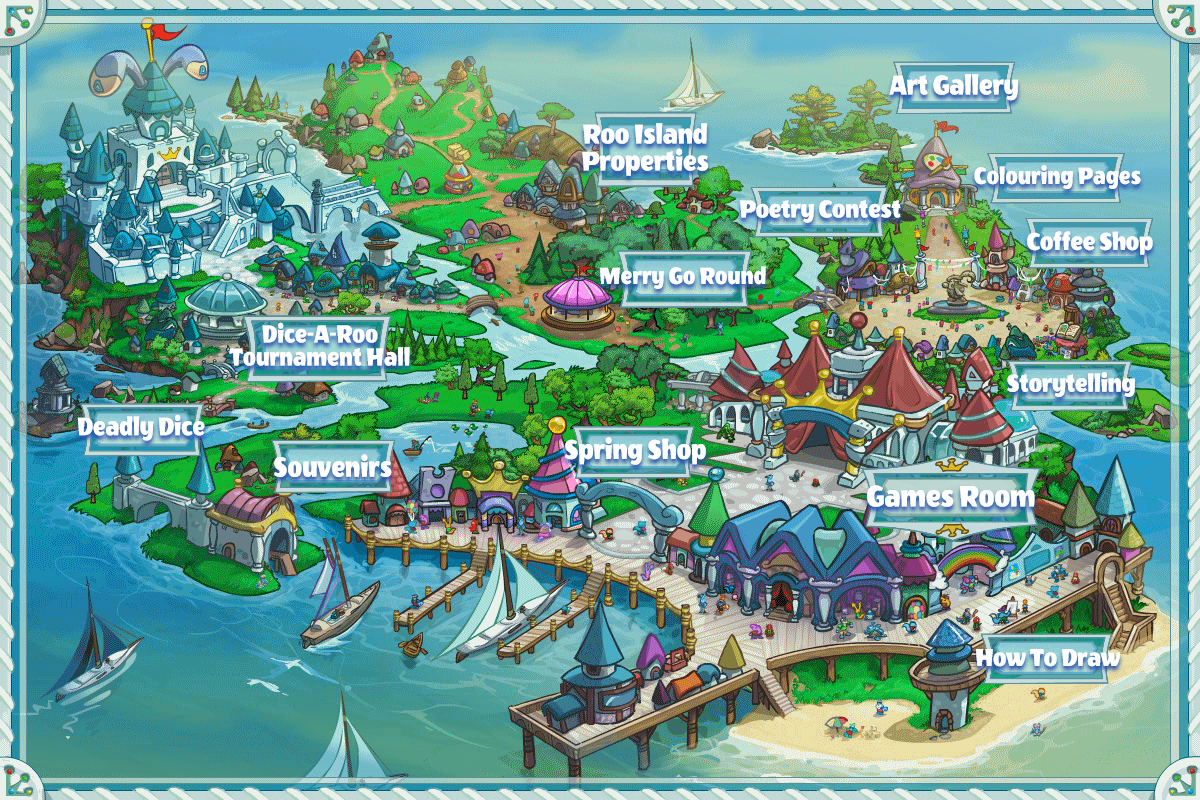 This is the largest settlement on the island, and is home to King Roo's castle. Besides the handful of small villages on the island, it is one of only three major settlements, the third of which is unknown.

This village is the second biggest settlement on the island. It is in the north, and has a small port. It is unclear if it moved position when the island was remodeled in 2012, but there is now a port near the Games Room.

After the remodeling of the island in 2012, a large chunk of Neopia Central's Art Centre that previously occupied the Catacombs was relocated to Roo Island, just above the Games Room. It is unknown if this replaced or added to the third major settlement that previously made up the island.

It is unknown which of the three major settlements they are in, but known street names in Roo Island include Tangleberry Drive, Lemberry Lane, Chievely Canyon, Membury Close, Crypt of Doom Road, Sea View Terrace, Little Paddock Road, and Meteor Street.

The island is roughly 5,000 square miles, and is situated 30 miles east of Neopia Central. It is roughly 50 miles across, and 100 miles north to south. It is predominantly grassy, with simple homes.

Here's how Roo Island has changed over the years. Click on the thumbnails to view larger snapshots.

Much like Neopia Central due to its proximity, Roo Island has generally sunny weather all year long, with enough rainfall to keep crops growing.

King Roo is currently sitting on the throne in Roo City, though it is thought by those in political circles that Advisor Broo is the true power in the country, manipulating the King to do his bidding. It is known that applicants for the position of treasurer must score highly in games of Roodoku. King Roo has no known children, and it is unknown who the throne would pass to if he died.

There is little documented history about Roo Island. It is known that the game Dice-A-Roo was first popularised there, after a traveller showed it to the King. In Year 14, the island was the host for the annual Daily Dare competition, with King Roo announcing a brand new games room. Unfortunately, it came with a selection of strange, Petpetpet like bugs that proceeded to infest the island. King Roo himself promptly disappeared, being hunted down by Lulu. She discovered that he had been traveling the world seeking a solution to the problem - eventually getting Tangor to design a device that would get rid of the bugs provided games were played on the island. Lulu then helped King Roo round up the remaining bugs, which peaked at 6,714,556. When the bugs were all removed, King Roo ordered that the island be remodeled, with several activities from Neopia Central moving in such as Blumaroll and the Art Centre. The island also became the host of the new Games Room, to prevent the return of the bugs.

Certain areas of Roo Island, commonly visited by tourists, require tickets that can only be purchased at the NC Mall.

Gummy versions of the dice used in Dice-A-Roo have become popular with natives, though there have been reports of some people classing them as dangerous. Various Gummy Food Industry Councils may be behind their popularity, as they periodically release pro-gummy propaganda. Tea and scones are also a firm favourite, with Grandma Roo's cafe being a popular stop for tourists.

The island has no known military power, though King Roo presumably has some form of castle guards. It is likely, due to the proximity to Neopia Central, that the island would call on the Defenders of Neopia in times of need.

Unsurprisingly, given the size of the place, there are only a few things to do on the island. Here's what you can try your hand at:

This page was written by Herdy and last updated on December 27, 2021.