Shenkuu, based loosely around the ancient orient, lay hidden in the mountains north of Altador for centuries until Year 8 on the 8th Day of Gathering. Its secrets are still being revealed. 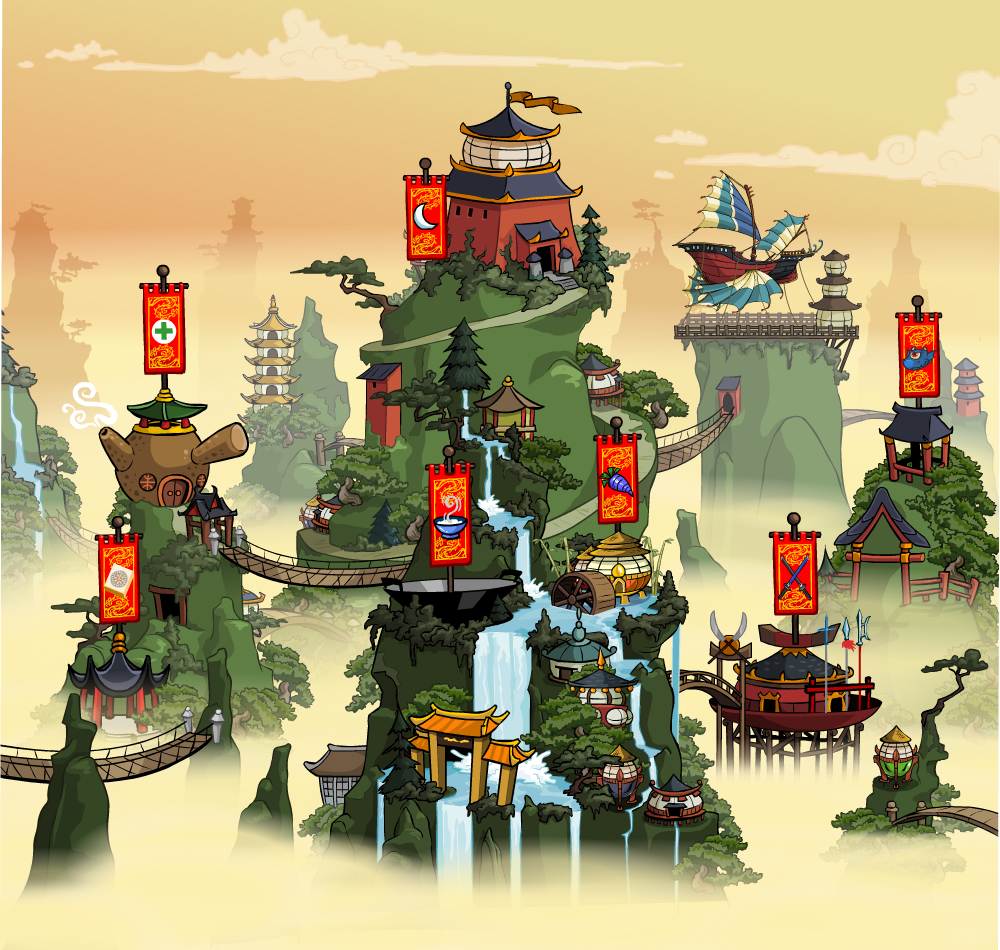 This is the heart of the Shenkuu Empire, and is the main port for the Cyodrake's Gaze whenever it returns from trading missions. The buildings here are perched atop the mountain peaks, and bound together by rope bridges that stretch through the mists. The Emperor makes his home here, in the Palace. Known street names include Cyodrake Lane, Squibble Berry Lane, Urchin Row, Sandan Circle, Tomamu Road, Prampet Boulevard, Hoban Harbor, Mossy Way, Bridge Street, Tuan Path, Sailors Alley, Linae Close, Kentari Crescent, Anshu Drive, Bluchard Root Canyon, Juma Square, and Gikerot Ridge. The city is the only currently publicly known land in Shenkuu, but as it is an Empire, there are likely to be other settlements elsewhere.

There is a small valley in the snowy peaks between the Imperial City and the Haunted Woods. This is home to a clan of giant Caprior-like monsters.

Shenkuu is rather inhospitable. It is located in the mountainous region west of Neopia Central, and north of Altador. There are a number of fast flowing rivers that snake down the mountains, and grassy areas have grown up by their edges. Locations are often named by landmarks, such as Mountain-in-the-Mist. The orchid species Selerium Taniverens grows in small amounts in Shenkuu.

One of the many cascading waterfalls in Shenkuu.

The mists almost permanently hang around the peaks of the mountains, obscuring the valley floors. Above the mist layer, the weather is normally cool and crisp, typical of normal mountain air.

The current ruler of Shenkuu is the Emperor (as yet unnamed). The current Emperor has at least two children, Princess Lunara, and Princess Terrana. Lunara is the eldest child, and stands to inherit the Empire should her father pass away.

Is it unknown exactly when the Shenkuu Empire was founded, but it is known that the Lunar temple was already constructed at the time the expedition set off to found the underground city of Moltara. It has existed in some form for at least a millennium, being around during the the time Altador disappeared. For the most part, Shenkuu remained hidden in the mountains, with the Cyodrake's Gaze making routine trade voyages. Eventually however in Year 8, Captain Tuan led the population of Neopia back to the city, and since then the Emperor has embraced the outside world.

Shenkuu is a thriving trading community, and you'll struggle to find a single occupant who is not in some way tied to one of the many shops. Shenkuu exports a great deal of food, medicine, and even petpets.

The Cyodrake's Gaze travels all over Neopia selling Shenkuu produce.

The Emperor holds a reasonable force of soldiers positioned on guard duty all over Shenkuu. Most notably however, Shenkuu possesses the technology to make flying ships, putting them at an instant advantage over many other countries.

Much of Shenkuu's culture is based upon the moon, with the Lunar Temple being a focal point as it tracks the movement of Kreludor. Every year, Shenkuu celebrates the Lunar Festival as an alternative to the new year festivals elsewhere in Neopia. Although the Lunar Festival normally happens in the first few months of the Neopian Year, the exact timing is based on the cycle of Kreludor and as such the date varies. The celebrations include fireworks, Snorkles, and dressing up as Cyodrakes.

In Shenkuu, it is believed that tangerines bring good luck. Unlike other Neopian lands, there is only one Faerie inhabitant of Shenkuu—Kaia. As such, Faeries can be treated with more suspicion in Shenkuu than elsewhere, often getting looks for being different.

Several species of Petpet are native to Shenkuu, being found in the Fanciful Fauna shop. Cyodrakes, while not native to Shenkuu, are a prominent part of the Empire, and a sizable colony of fire Cyodrakes exists somewhere in the mountains. A cave populated by Blobagus exists within the city itself.

Shenkuu is a very peaceful city, and you can often find yourself lost as you wander through the tranquil mists. If you can find them, remember to visit: