Tyrannia is one of the most ancient civilisations in Neopia. Modern language here is hard to come by, consisting mainly of grunts and snorts. At one point there was an estimated 32,600 Neopets in Tyrannia, but since then this figure has increased. It was rediscovered by modern Neopia in Year 3 on the 21st Day of Running. 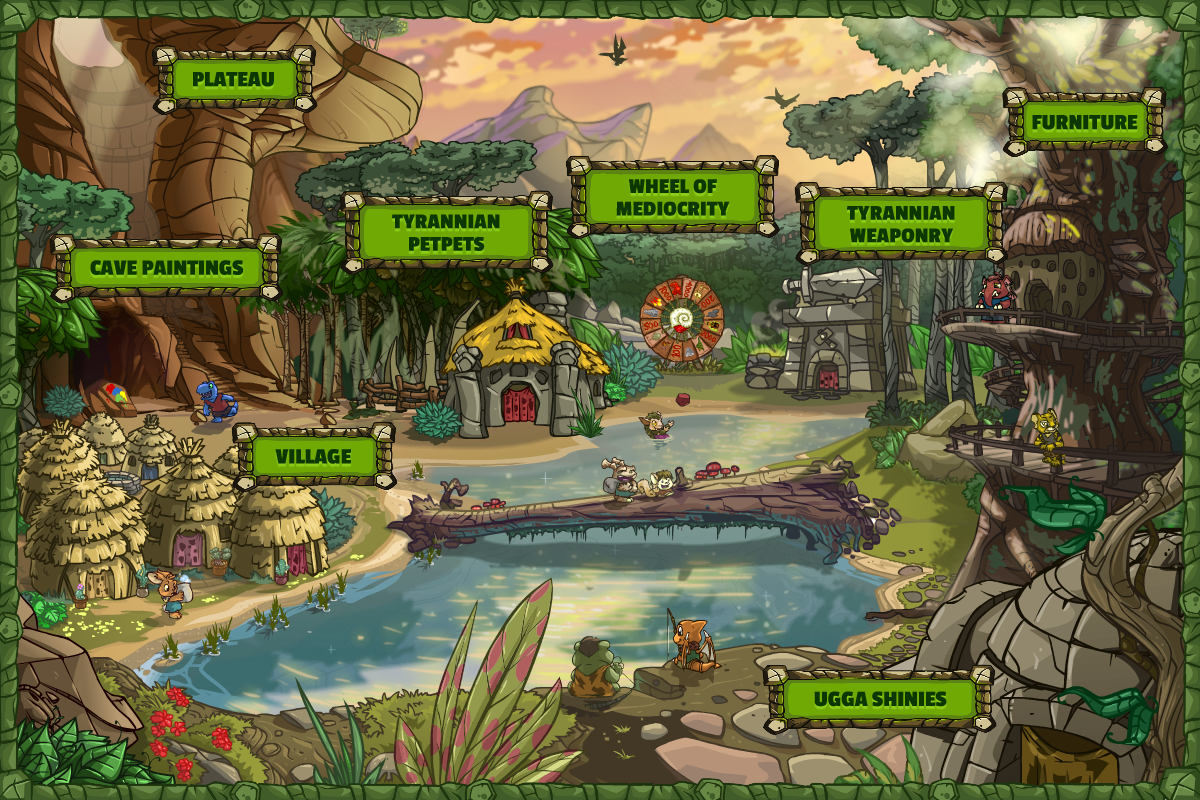 This barren array of canyons and caves is perhaps the most popular area of Tyrannia, set 8,035 kilometers above sea level. Here you'll find the concert hall, and the Wheel of Monotony. The Giant Omelette also frequently appears here. In the far reaches of the plateau is a live volcano that the Tyrannians once used as a place of recreation. Most have now moved out of it, and only the bravest souls venture within. Interestingly, buried in one of the caves was one of the amulets that are key to awakening Moltenus on Mystery Island. The plateau is made of sandstone, and is very large. So much so that the Missing Valley area was completely lost by its own residents when they went out hunting one day. 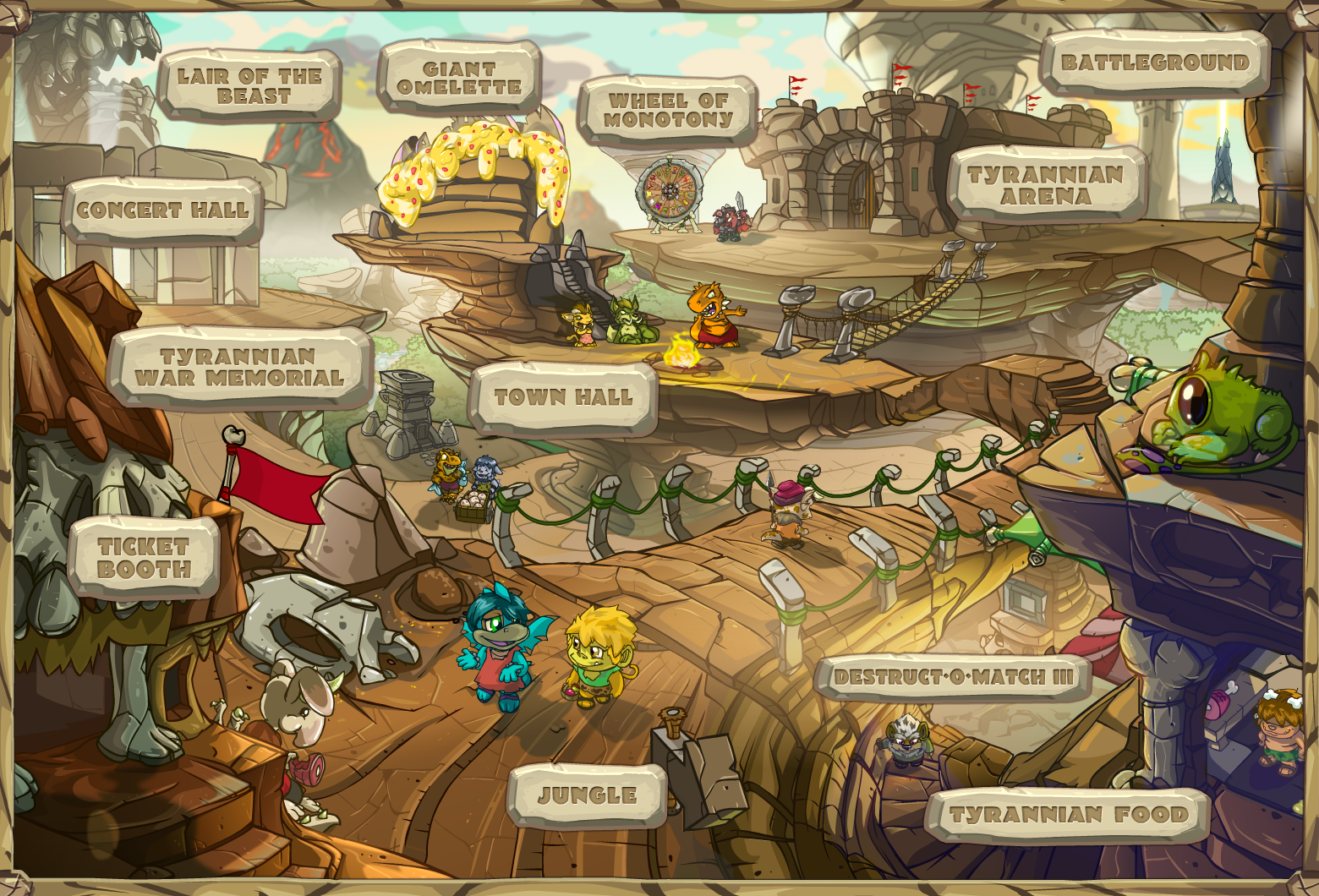 Below the Plateau is a dense pre-historic jungle, with many plants that cannot be found anywhere else on the planet. A few stone buildings have been carved into the rock outcrops in this area, and shops have set up within them. It is home to an estimated 109,870 Neopets.

In the deepest part of the jungle is the village of Tyrammet. This collection of straw huts is home to around 500 Neopets, and was the original target of the Monoceraptor's invasion.

A typical scene in Tyrammet.

Although no longer available to visit, in the far north of Tyrannia there is an active volcano that once held Tyran Far's weapon shop, and is still the scene of games of Volcano Run.

It's unknown which area they are in, but known street names in Tyrannia include Ugg Road Tyrammet Close, The Plateau, Fiery Crescent, Volcano Lane, and Swamp Road.

Tyrannia as a whole is situated to the east of Terror Mountain, making up the eastern edge of the North Pole. The terrain of Tyrannia is varied according to the location you are in. The Plateau is roughly 850 square kilometres, and is a very infertile place. The jungle below is quite a different story, with very dense vegetation. As Tyrannia is situated so close to Terror Mountain, the entire region is very mountainous. There are some upmarket areas, such as the Dunghill Mansions.

Off the coast of Tyrannia is an area known as the Ruinous Reefs where ships can often run afoul.

Here's how Tyrannia has changed over the years. Click on the thumbnails to view larger snapshots.

Despite the proximity to Terror Mountain, Tyrannia's climate could not be more different. There is scorching heat all year round on the Plateau, while the jungle is unbelievably humid.

Tyrannia is a republic, and the governing is overseen by a council of wise elders. The council meets in the town hall on the Plateau, and the current members are Kyruggi, Grarrg, Tekel, Plesio, Sabre-X, and Myncha. Each member fulfills specific duties to the council, but Kyruggi is the current Grand Elder, putting her in overall control of the region.

Tyrannia is perhaps the oldest of all the Neopian lands, being the origin for almost all Neopets currently settled on the planet. Early famous explorers such as Mad Tongue Murphy set out from Tyrannian ports. At some point in the early history of Neopia, a great earthquake hit Tyrannia, and buried it from view. Neopets that had settled in other areas of the globe continued to progress, while under the rock, Tyrannian life continued at the same old pace. Centuries later in Year 3, another earthquake hit Tyrannia, and this time revealed it to modern day Neopets. Remarkably, little of Tyrannian civilisation had changed in that time.

Not long after Tyrannia returned to the world stage, an ancient monster known as the Monoceraptor attacked the area. He brought with him a vast army of Tyrannian pets. Thankfully, the combined forces of the council and adventurers who came to lend a hand managed to defeat the Monoceraptor's forces. This day is celebrated annually as Tyrannian Victory Day.

In Year 15, another earthquake struck Tyrannia, revealing an Obelisk buried on the plains. 6 factions gathered to battle over the right to open the Obelisk. They were the Awakened, the Brute Squad, the Order of the Red Erisim, the Seekers, the Sway, and the Thieves Guild. At the conclusion of the war, 6 spirits appeared from the Obelisk, representations of the worst fears of each of the faction's greatest fears. When they were defeated, the Sway emerged as the winners of the war. They opened the Obelisk to find the Oracle, an ancient spirit seer that had been trapped in the Obelisk since Neopian pre-history. The Oracle rewarded the Sway, but the truce between the factions did not seem like it would last long.

Despite lacking the technology of other countries, Tyrannia remains a competitive trader on the world stage. Tyrannian wares are popular, and the concert hall is almost always a sell out event. Tyrannia is also one of the many Neopian lands to embrace gambling as a means of income.

The Giant Omelette that periodically appears on the Plateau provides food for not only Tyrannia, but a sizable chunk of the planet. Outside the many varied flavours the omelette has to offer, Tyrannians also feast on prehistoric animals such as the Bargasaurus or Gargaraptor. A great deal of plants from the local jungle are also eaten.

Tyrannia has a sizable military, with divisions on land and in the sea. A number of spells and potions are also at their disposal. However, it is no secret that Tyrannia's defences are perhaps the most basic in all of Neopia, being prehistoric spears and the like.

Tyrannia is one of the few Neopian lands to possess a distinct language of their own. Written forms of Tyrannian exist, but it is far more commonly spoken as a mixture of grunts amongst locals. There are various different dialects, one of which is Acko Ugga. Whilst many dialects have been translated for some time, others have proved more difficult to decipher.

It is known that 'Gulg' means 'Coffee' in one of the dialects, though it is unknown which one. Similarly, 'Tyranu' means 'Higher' in one dialect, and 'Evavu' means 'Lower'.

You can find the following varieties of Pterodactyls:

There're many things to see and do in Tyrannia. If you have the time, why not visit:

Tyrannia also has a special arena of the Battledome all to itself—the Ugga Dome! You'll find challengers like Magnus the Torch or the Cave Chia there.

This page was written by Herdy and last updated on December 27, 2021.