The Virtupets® Orbital Space Station #4 has been the outer space destination of choice since its discovery in Year 2 on the 17th Day of Hiding. It is home to around 1,000 Grundos, and a fair number of other Neopets. It's free to explore, just make sure you stay away from the airlocks! 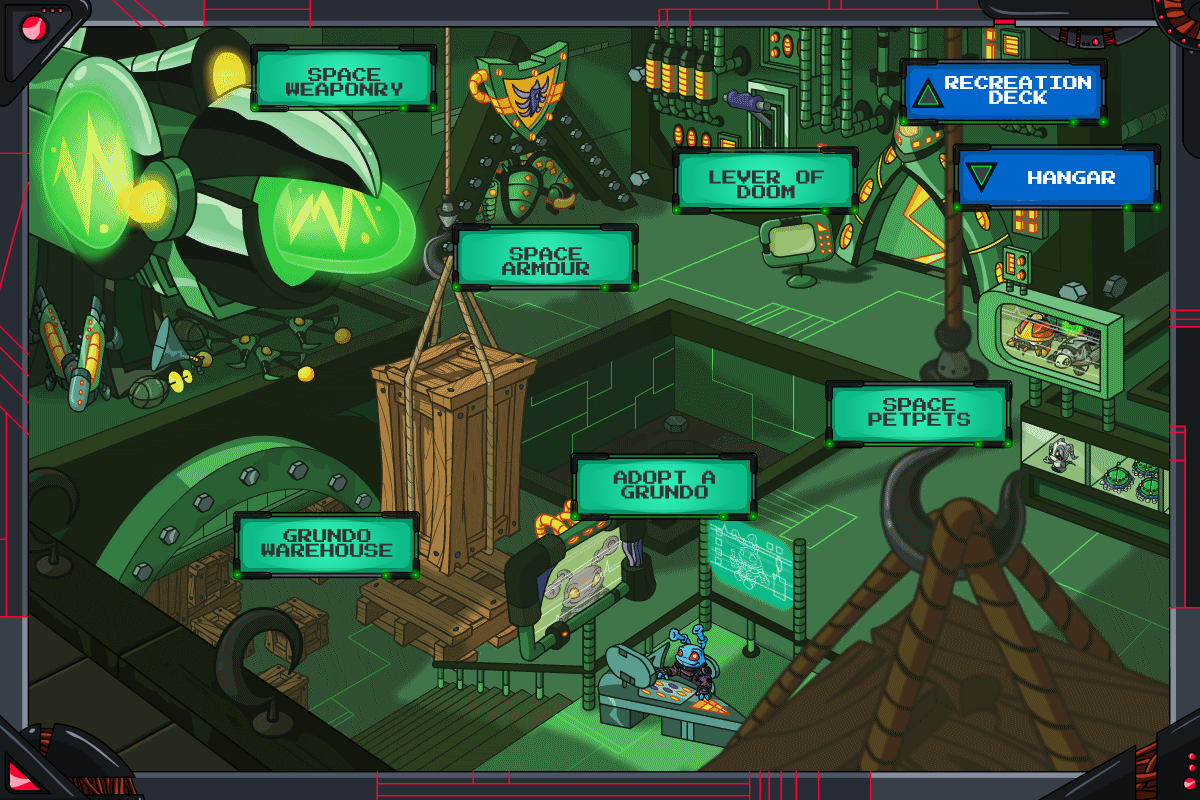 This vast warehouse-like level holds most of the shipping businesses onboard the space station. The Grundo Warehouse houses one of the largest collections of items on the planet, while Grundos themselves can be adopted by loving families on this level. A central elevator connects all the floors, should you wish to move on to another location.

This is perhaps the area where visitors to the space station spend most of their time. Rooms dedicated to sports such as Gormball can be found between the various eateries, such as Grundos Cafe. This level of the station was formerly known as the Amusement Level, but was revamped in year 9. 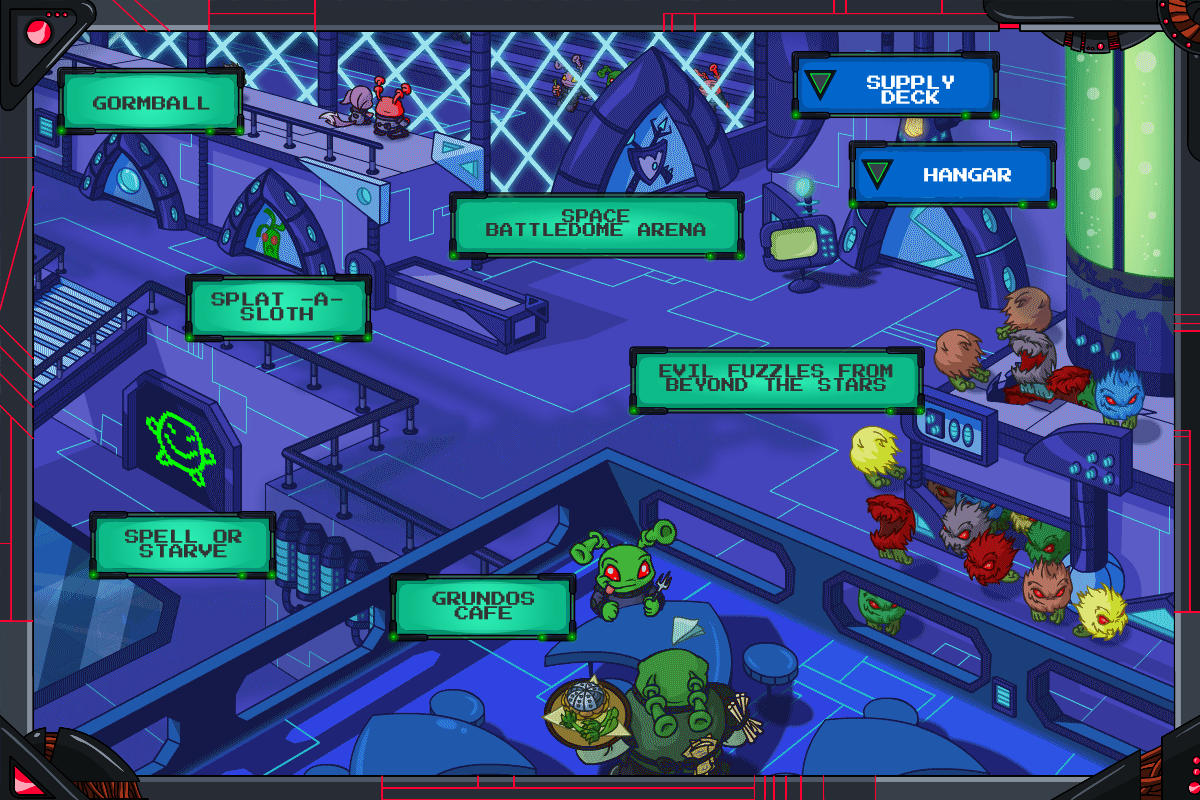 This is the first and last sight most people have of the space station. Countless hundreds of space ships are docked in the hangar at any one time. Those visiting the hangar are expected to be familiar with the Rules & Regulations, which number in the thousands. Regulation 1342.322.6, for example, forbids people from sleeping behind test engines unless commanded to do so by an evil mastermind. 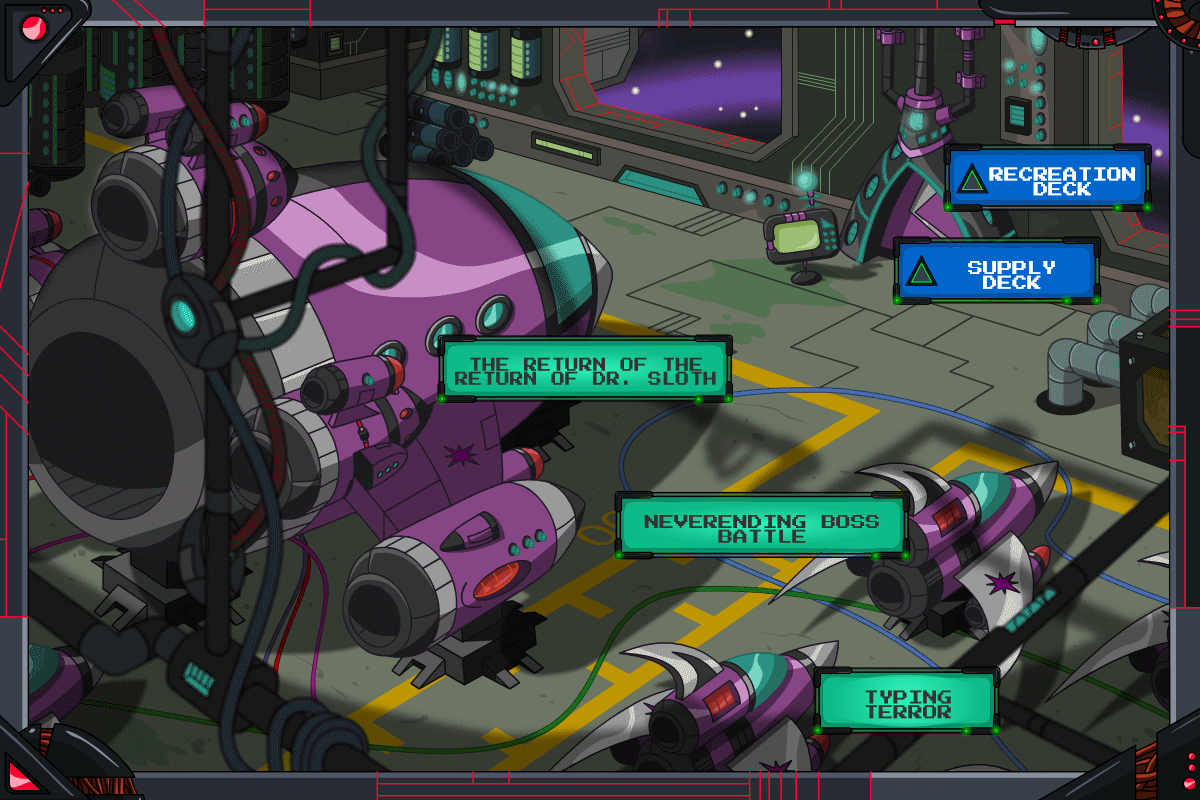 Hidden deep within the maintenance tunnels that connect the different levels are the headquarters of the resistance against Dr. Sloth. This location is known to few, due to the secrecy employed by the resistance, and has access to most of the space station's communications and surveillance systems.

The Virtupets Space Station is a space station with a geosynchronous orbit. It is comprised of many different levels, the exact number of which is unknown. However, it is known there are at minimum 57 levels. One elevator listed the levels as 1-40, B1-B3, M1-M5, X1-X5, E, N, G, and Q. Access between these levels is typically via the central elevator or teleport, but maintenance tunnels exist for station technicians and janitors. On one particular corridor, there are exactly 1,000 windows. The very lower levels of the space station are off limits, and contain some of Dr. Sloth's less successful experiments, such as the Mutant Aisha Twins. There was at one point a Detention Level, where Dr. Sloth kept Moehogs before his defeat.

Here's how Virtupets has changed over the years. Click on the thumbnails to view larger snapshots.

Obviously, there is no weather in space. Internal life support keeps the air within the station breathable and the temperature average. Space suits for trips outside the airlocks are a must.

The space station was created by Virtupets, Inc. This is a front for Dr. Sloth, and for many years he was in complete control of it. However, he has recently been deposed, so it is assumed that the station is now relatively free.

It is unknown what became of space stations #1-3, but #4 was created as part of Dr. Sloth's plan to turn every Neopet on the planet below into a mutant, using a handy transmogrification ray built into the station, in the summer of Year 2. However, Sloth was defeated by the Space Faerie, and retreated to his fleet in orbit around the planet. The transmogrification ray upgrades were destroyed, leaving the station floating harmlessly in orbit.

While he was away, one of Dr. Sloth's pet projects activated itself in Year 3. The computer program known as Neopet V2 locked a group of children within one of the station's elevators. The Neopian public managed to track down the programmers that had been involved in the Neopet V2 project and shut him down before the children ran out of air.

Some time after this, Dr. Sloth tried to seize the space station again in Year 10, and succeeded briefly before a counterattack from the resistance. Sloth's plan was to use Kreludite from Kreludor to once again activate the station's mutation ray. The resistance was able to defeat Sloth's forces onboard the station, while destroying the nearby fleet. Sloth himself was sealed within the Space Faerie's Token, which is currently floating in deep space.

The space station has the almost limitless funds of Virtupets, Inc. behind it, so money is never really an issue. However, a great deal of high tech weaponry and Petpets are exported from the station, and it is rumored that the station makes quite a lot of Neopoints from the Lever of Doom on the Supply Deck. A great amount of recycling takes place in a specialised Recycling Center within the station, reducing the need for imports. There is a University aboard the Space Station, one of only two known in Neopia.

Replica space ships can be purchased from souvenir shops onboard the station.

Food onboard the space station is normally freeze dried or dehydrated for storage in space. A few delicacies are served in Grundos Cafe though, including radioactive dishes and the ever popular Roast Gargapple.

The space station is perhaps the best armed of all the worlds in Neopia, being designed as a weapon to mutate the entire population of the planet. Sloth's fleet was at one point docked at the station, but since its destruction, resistance fighters have taken up the position instead. The resistance has a small army of highly trained operatives that carry futuristic beam weapons as standard. In addition, it has secret contacts in positions all over the face of Neopia.

Since Sloth's defeat, the resistance has been consolidated into the Virtupets Space Station Security Force, or VSSSF for short. This has operatives in a number of different areas, including safety inspectors. There is a comprehensive training manual for safety recruits that includes directives like, "Don't hurt your paw - use a Magnet Claw!", "Ruckuses are unsafe and must not, under any circumstances, be caused", and "Never look a Money Tree in the mouth, but always approach with hedge clippers!" It has at very least ten sections, each with many subsections of their own.

VSSSF safety forms include the S4F3-T form, for those that have suffered injuries. It is VSSSF policy that civilians are not allowed near space ship crashes until a safety inspection has taken place. There is also a policy known as B3-3G-335.

Although technically not native to the Space Station, as they come from other worlds beyond Neopia, the non-robotic Petpets sold in the Space Petpets Shop can be found all over the station. Evil Fuzzles are considered a nuisance, regularly attacking the outer hull of the station and requiring cleaning crews.

Should you be struggling to think of anywhere to visit on the station, why not try:

The space station also has its own area of the Battledome on the Recreation Deck—the Neocola Centre! Inside, challengers like the Space Faerie or Commander Garoo are waiting for a fight.