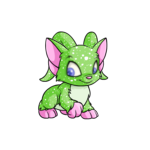 The Acara is a furry Neopet and a quadruped (meaning it walks on four feet, in this case the Acara's characteristic pink paws). Its most striking feature is its double-sized, shell-like ears, but you can also easily recognise an Acara by the long horns on the back of its head. Unlike the horns of an Altachuck or Snicklebeast, the Acara's horns are flexible, and can flop and swing about when the Neopet moves its head. The fur of an Acara is short but scruffy, and particularly prominent around its cheeks and paws. They are a medium-sized Neopet.

Although the Acara's appearance is similar to that of many land-based mammals on Earth, it is actually a notably competent swimmer, and very much at home underwater. The diving and swimming abilities of this pet are alluded to in the name of its annual celebration, the Acara Aquatic Festival.

The Acara is one of several pets on the site to have undergone a name change as well as several redraws. When first discovered on the 28th of Eating, Year Two (known to non-Neopians as April 28th, 2000) it was named the Tigren by Adam and Donna. This little ball of fluff shares the prominent ears and fuzzy fluff we can see in the Acara today, but is missing the unique Acara horns and appears to have a tail, something the modern Acara seems to lack.

The horns were introduced in a later redraw, which also removed the Usul-like brush tail and added the cute pink nose that can be seen on most Acaras to this day.

The name "Acara" was officially introduced along with yet another redraw, which caused strong feelings of both delight and horror among former Tigren owners. Many thought their pets' character had been dramatically altered by the revamp. It's not clear how these early Acaras moved about, with all four legs appearing to extend from the head in some drawings. So it's fairly unsurprising that the pet had to be revamped yet again, this time becoming something far closer to the Acara we're familiar with today.