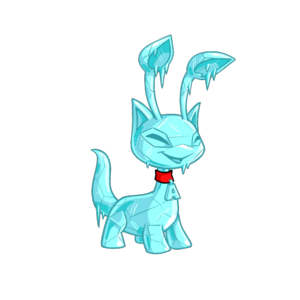 The Aisha is a short-furred pet and a quadruped, meaning it walks on four legs. Its most noteworthy feature is its two extra ears, which stand out on antenna-like stalks. Aishas are also famous for the unusual shape of their eyes, which always appear to be half-closed; this does not seem to affect their sight at all, though it's not impossible that their enhanced hearing compensates for any handicap. Almost all Aishas wear the characteristic "Aisha collar", a simple strip of ribbon with an A-shaped charm attached, around their slender necks. They are a medium-sized Neopet.

Aishas seem to be native to many areas of the world, including Neopia Central. They have a natural aptitude for magic, although the acute hearing granted by their extra ears also makes them very quick to react to new situations and they are quite agile as well as magically talented. They have a love for starlight and the night sky, and will often look up at the stars when in need of guidance. Many like to believe they are related to the strange Alien Aishas that come from far beyond Neopia's solar system, but the fact is that most Aishas have only one extra set of ears and no ability to navigate outer space. However, they can take some consolation in the fact that the lab ray provides an Alien colour for their species alone, complete with a space helmet, which they can use to play at being extraneopian creatures. 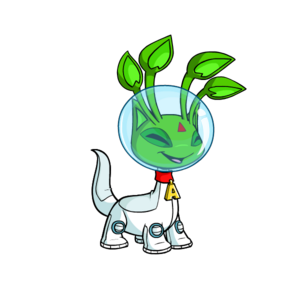 The Aisha is one of the "prehistoric" pets discovered before official records of Neopian events were kept. It was one of several pets to originally be drawn with a rather faded colour fill, which would later be corrected to make it brighter and bolder. The Aisha collar has been made more defined over the years, and the shape of the Aisha's body has been redrawn and refined, but the basic features of this pet have remained more or less the same.