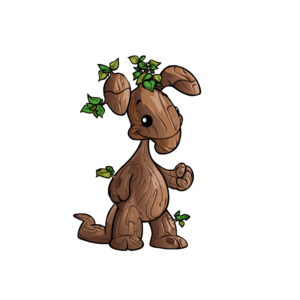 The Blumaroo is a Neopet with short, soft fur that walks on two legs, although it can also often be found bouncing on its highly springy tail. It is recognizable by its large ears, beady eyes and long drooping nose. When balanced on its tail, it measures alongside the taller pets in Neopia.

Blumaroos can be found all over Neopia, and there seems to be a sizeable population of them in Happy Valley. However, their native land is probably Roo Island, which is inhabited by almost no other species. They are highly athletic Neopets, with amazing jumping skills. Blumaroos are naturally optimistic creatures, almost always to be found in a happy mood; they are fond of the simple pleasures in life, such as music, acrobatics and dice games.

The Blumaroo was introduced to the site on the 25th day of Hunting, Year Two (known to non-Neopians as May 25th, 2000), the same day as the Zafara. Its name may be related to the Australian animal the kangaroo, which looks rather different, but is also fond of bouncing around the landscape. Blumaroos have changed remarkably little over the years, with only a few odd creases in their skin being ironed out. However, it's a little sad that their current pose, unlike older ones, doesn't show off the lovely heart-shaped pads on the soles of the Blumaroo's feet.