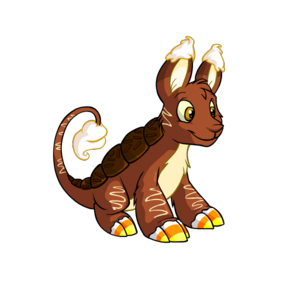 The Bori is a furry Neopet and a quadruped, meaning it walks on four legs. Its biggest distinguishing feature is the tough plates on its back, which serve as a kind of natural armour. It has a fluffy chest and two large ears, and its paws end in heavy claws suited to digging. It is a medium-sized Neopet.

Bori originate in the Ice Caves deep beneath Terror Mountain. They excel at all the local sports, such as skiing, skating and dancing, and are also quite possibly Neopia's best diggers. They are timid little pets, and prefer to spend time in familiar places or underground.

The Bori was introduced as a createable pet on the 13th day of Collecting, Year Six (known outside Neopia as October 13th, 2004). However, its official introduction would come slightly later, as part of the Hannah and the Ice Caves plot. Hannah discovered a forgotten colony of Bori in the Ice Caves, who would go on to help her in her struggle against the Thieves' Guild. The pet has barely changed since its first appearance.

A special thank you to Neopian glitterkitty69 and her Ice Bori guide and directory for the screenshots used.

The Bori is unusual in that one of its colour combinations, Ice, is nearly as rare as an Unconverted pet. For most species, Ice is a lab colour; however, as part of a sponsor offer running at the time of the Hannah and the Ice Caves plot, users were given the chance to create an Ice Bori in exchange for downloading a special toolbar.

Now, how did this work? Well, the Neopets/Yahoo! toolbar was created in fall of 2004. In order to entice users to download this toolbar, they were given the opportunity to own some of the very first Bori in Neopia. Anyone who downloaded the toolbar was allowed to either morph an existing pet into a Bori, or create a Bori from scratch. They could pick from five colours: Red, Blue, Green, Yellow, and (you guessed it!) Ice. Each user was allowed only one Bori creation. Anyone eligible will see the below information when visiting the Create a Bori page.

Once the toolbar was discontinued, so were the Ice Bori. However, you can technically still obtain one today if your account downloaded the toolbar (and therefore was eligible for a Bori) but never "redeemed" its free pet. Otherwise, you'll have to trade for this special pet because they cannot be obtained by Fountain Faerie Quests, morphing potions, or the Lab Ray. You can also wish for one in the (now) annual Dream Pet Giveaway hosted by TNT in December. You'll never find one floating in the pound, either—Ice Bori turn Blue if they're ever disowned! 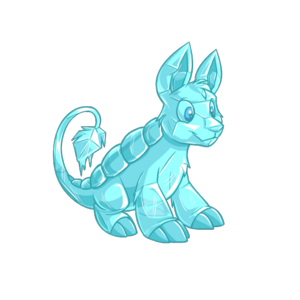 This page was written by Dream & noileh and last updated on September 12, 2022.